If you’ve never had breast cancer, there’s a good chance you know someone who has: 1 in 8 women will develop breast cancer at some point in her lifetime.

But the disease has hit one Minnesota family especially hard — and doctors don’t exactly know why.

Decked out from head to toe in pink, Jon Althoff was hard to miss at the Making Strides Against Breast Cancer Walk on Oct. 15 at Mall of America.

He had not one but three reasons to be there. His wife and two daughters have all battled breast cancer.

“I was scared to death,” Jon Althoff said. 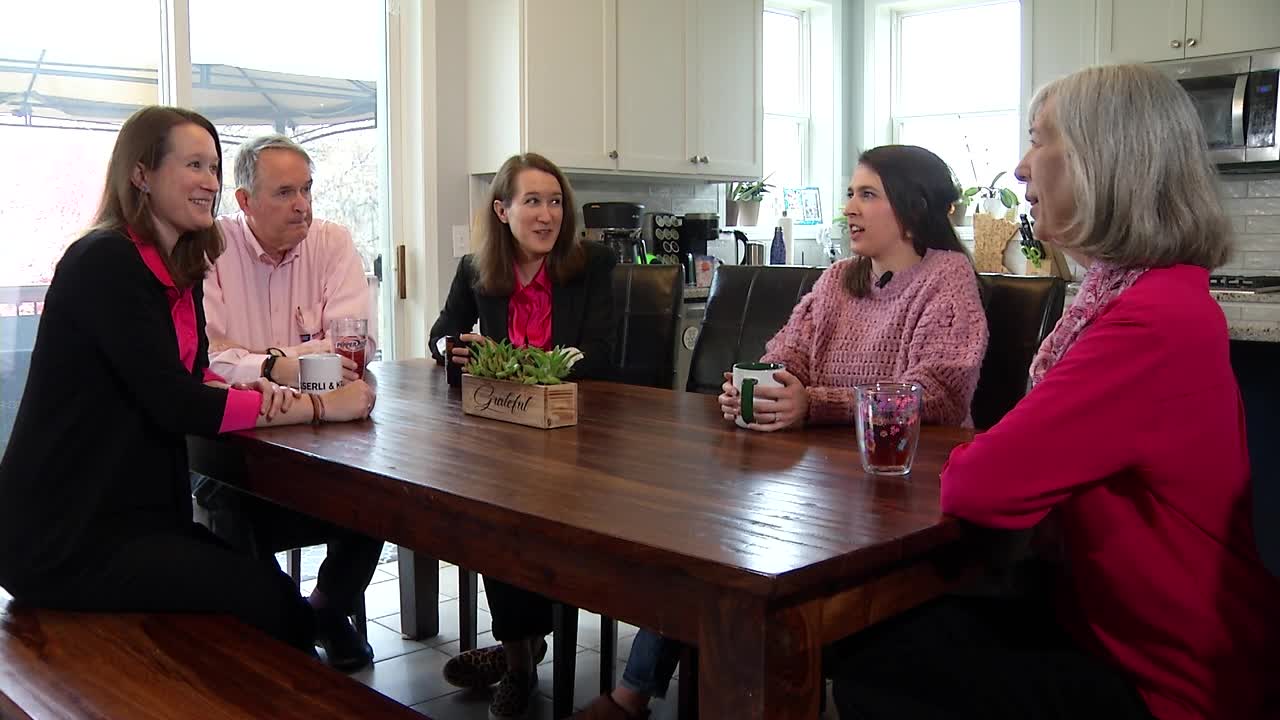 His wife, Jane Althoff, was diagnosed at age 41 and opted for a double mastectomy.

She is now a 22-year survivor, but the thought of her kids’ diagnoses made her cry.

Twins Steph Lamphere and Allison Steinke were diagnosed with breast cancer within weeks of each other, back in 2019.

“The way I describe it to people, I really felt like my stomach fell out of my butt,” Steinke said. “It was very scary, very terrifying, and I just kept thinking, ‘This can’t be happening.'”

Steinke, in school for her Ph.D., was stage 0 and had a double mastectomy a few months later. Lamphere, a lawyer, tagged along at all of her twin’s appointments and was having concerns of her own.

“We were there for Allison, so I didn’t want to draw any attention to myself or freak anybody out,” Lamphere said.

She had recently had a mammogram and found a lump but was told to simply monitor it. After watching her sister, she instead called the breast clinic and asked for another ultrasound.

It turned out Lamphere was stage 2 with a more aggressive form of cancer and needed chemotherapy.

“If I had waited, if I had not called and gone in for additional screening, it’s entirely possible that I could’ve been at stage 3 or possibly 4,” Lamphere said.

The Althoffs walked these cancer journeys together and now urge others to pay attention.

This year in Minnesota alone there have been 4,950 new cases of breast cancer.

The American Cancer Society says sometimes there are no symptoms. They recommend women start screening at age 45 because sometimes catching cancer early can save a life.

“Sometimes when I’m sitting in doctor’s offices, I kind of feeling like they’re looking at me like a ticking time bomb,” Hempel said.

The Althoffs don’t have the BRCA gene. They say three breast cancer diagnoses in one family has stumped even their doctors.

“We were screened for all known breast cancer variants and were negative for all of them, and so we literally are creating science,” Steinke said.

Jon Althoff now wears pink every day of October, raising money for research in honor of his girls — his “superheroes.”

“I learn from them every day,” he said.

Jon Althoff is one of 32 Minnesota ambassadors for the Real Men Wear Pink campaign. He has personally raised more than $35,000 for the cause over the last few years. You can donate by clicking here.

According to the American Cancer Society: