Family hosts rally, march in Minneapolis ahead of anniversary of George Floyd’s death

With the one-year anniversary of George Floyd’s death two days away, hundreds gathered for a rally and march Sunday in downtown Minneapolis to support Floyd’s family.

The event started with a rally outside the Hennepin County Government Center — the same building where a jury last month found former Minneapolis police officer Derek Chauvin guilty on all counts, including second- and third-degree murder, for Floyd’s death.

Amid chants of "no justice, no peace!" and "Say his name," Gov. Tim Walz, Minneapolis Mayor Jacob Frey and St. Paul Mayor Melvin Carter watched alongside a dozen of Floyd’s family members as speakers called for justice for families of Black men slain by police.

"It has been a long year. It has been a painful year," Bridgett Floyd told the crowd on Sunday. "It has been very frustrating for me and my family for our lives to change in the blink of an eye — I still don’t know why."

Floyd family attorney Ben Crump and the Rev. Al Sharpton were the keynote speakers and urged the hundreds in attendance to continue the fight for racial justice. 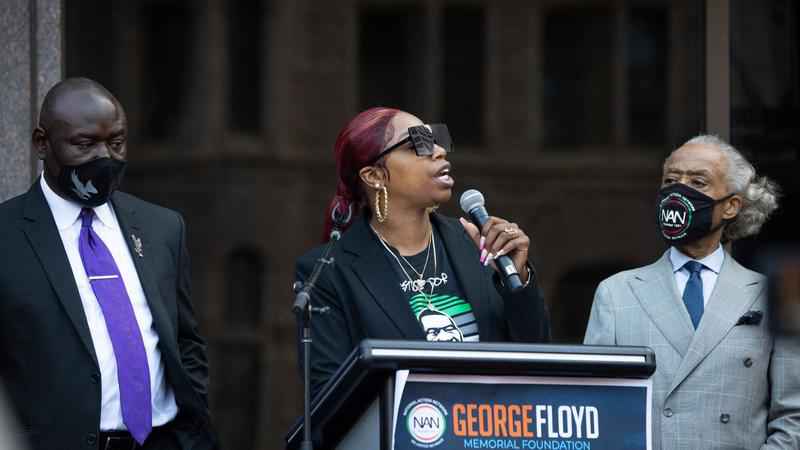 Bridgett Floyd speaks at a rally and march for the one year anniversary of George Floyd's death on Sunday, May 23, 2021, in Minneapolis.[Christian Monterrosa/Associated Press]

Crump has gained a reputation over the past year as the "attorney general of Black America" and is retained by several families of Black men who have been killed or injured at the hands of police, including the families of Ahmaud Arbery and Jacob Blake.

"And, that leads me to this one question: Brothers, and sisters, what is it about a Black man running away from the police that is most dangerous thing in America?"

Sharpton called on Congress to pass the George Floyd Justice in Policing Act, which has started to lose momentum despite President Joe Biden setting the Tuesday, the anniversary of Floyd’s death, as a deadline for its passage.

"We want something coming out of Washington. We want something that will change federal law," Sharpton said. "There’s been an adjournment on justice for too long. It’s time for them to vote and make this the law."

Sharpton said Biden will be meeting with the Floyd family this week to update on the George Floyd Justice in Policing Act, which passed the House in March.

Both Sharpton and Crump said they will be back in the Twin Cities for Chauvin’s sentencing and the federal trial of the three former Minneapolis police officers also charged in Floyd’s death.