Strong emotions were on display Saturday, as dozens of protesters filled the streets in Minneapolis, calling for justice in the deadly police shooting of Andrew Tekle Sundberg.

“What we’re here for is when Tekle was shot by the Minneapolis police and died,” Sundberg’s father, Mark, told reporters.

He and his wife Cindy, spoke outside the 21st Avenue South apartment building, where warrants say the 20-year-old was shot and killed by two police snipers early Thursday morning.

“We are all imperfect humans,” she said. “He did not deserve to be picked off like an animal from a rooftop.”

But nearby, Anabella Yarbrough — who says she and her two young children live across the hallway from Sundberg’s third floor apartment — showed up, appearing upset by the protest.

“He had six hours to choose life. I had two to five minutes to choose life,” Yarbrough, 24, declared. “Why didn’t you guys check on him to make sure he had proper help before this happened?”

On a social media post, she shared photos of bullet holes though her apartment door, a window frame, in the walls, and a spray can in her bathroom. 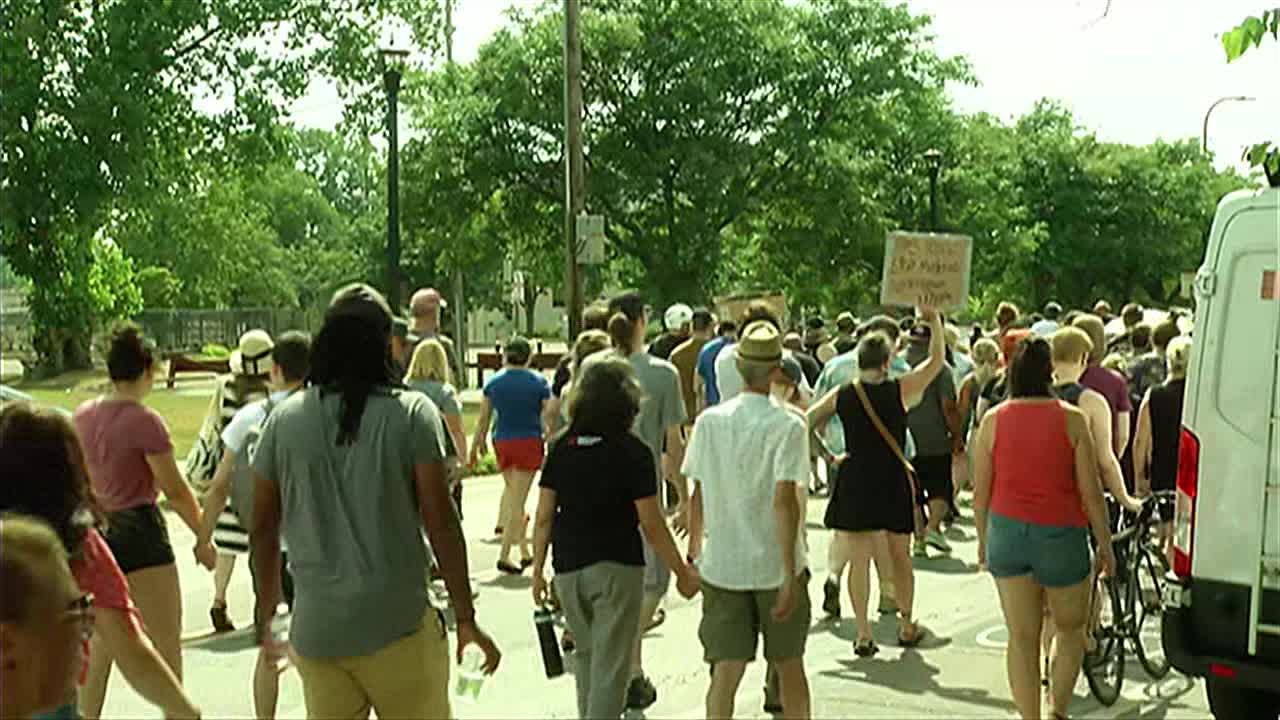 Protestors marched near the apartment of a deadly police shooting on Saturday (KSTP).

Yarbrough says she was cooking dinner for her children Wednesday night, when Sundberg began shooting.

“He started in the hallway shooting bullets into my unit,” she recalls. “Made his way into his unit and started firing while police were trying to get me and my kids. I literally almost died. You can see all the bullets he left in my unit.”

A neighbor who identified himself only as “Marcus,” says he heard the gunshots.

“She gets rescued by the police. She comes out and she looks petrified,” he remembered. “He shot into her apartment, missed her somehow with the grace of God, her and her kids.”

Minneapolis police say they responded after receiving information that Sundberg was firing shots inside the building.

Court documents say officers found multiple live and spent rounds in the hallway, and bullet holes in the walls.

Sundberg’s parents expressed sorrow and apologized for what happened.

“I wish I could wrap my arms around her and tell her I am so sorry,” Cindy Sundberg added. “I’m so sorry for her pain I just grieve for her also.”

A statement by the City of Minneapolis says negotiations between police and Sundberg went on for six hours, before the police snipers shot him.

Police aren’t saying what prompted the sniper officers to open fire when they did.

In a statement, Jeff Storms, the Sundberg’s attorney, says the family has been given very little information — in his words, “why Tekle’s mental health crisis became a death sentence.”

Storms — who says the 20-year-old struggled with his mental health — says he has questions about the official narrative.

In a release, Minneapolis police say they are working with the attorneys of Sundberg’s family, to enable them to view video associated with “the police response to the calls of shots fired, the active shooter situation, and the standoff that followed.”

The department says its personnel are reviewing hundreds of hours of body cam video and audio.

Storms says he’s requested some of that footage, which he says could be released as early as next week.

“(Yarbrough) was scared, man,” Marcus explains. “I understand it was a mental health breakdown, I do, I understand that. But he was also putting this family in jeopardy shooting into their unit.”