A 6-year-old girl who was hit by gunfire while riding in a vehicle late Monday night has died, according to family.

The family of Aniya Allen told 5 EYEWITNESS NEWS she suffered a gunshot wound to the head during the shooting, which happened near 35th and Penn avenues.

Wednesday, KSTP’s Eric Chaloux learned from family that Aniya had died after being hospitalized.

We have learned from family that 6 year-old Aniya, has lost her battle after being struck by a bullet Monday night. Heartbreaking. pic.twitter.com/E4YHFmOSsX

"It went from sadness to madness, I went from being sad to being angry and furious, because now it’s been two days that somebody or somebodies … shot and killed our loved one, and there has been no call, ‘hey I apologize, it was an accident … or whatever to turn themselves in," KG Wilson, Aniya’s grandfather and community activist, said.

"You murdered our loved one … a 6-year-old baby, a precious little girl, you murdered her … I don’t know who you are, or whoever where you’re at but I hope you are watching this," he added. 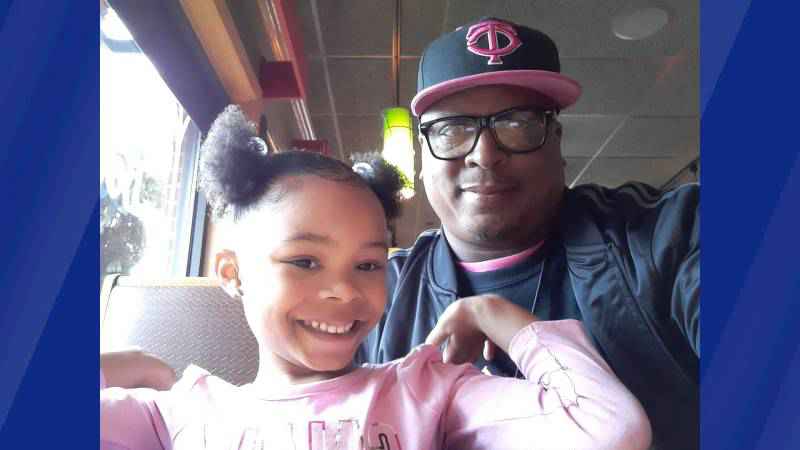 Kay G. Wilson (left) with his granddaughter, who was shot Monday night in Minneapolis.[Courtesy of Kay G. Wilson.]

Aniya was the third child in just over two weeks to be treated for gunshot wounds in Minneapolis. Their families and community members have gathered this week to call for an end to the violence. However, city leaders are facing disagreement on how to address it, which has frustrated some.

"Merge that stuff before the end of the week and bring back marching orders to your people because right now, you guys are creating just as much division as we got on the block," community member Jerry McAfee said during a gathering.

Minneapolis Mayor Jacob Frey’s office issued a statement, which read, in part, that the mayor "briefed a majority of the city council prior to publishing his plan and will work to earn their full support. There are, however, significant elements of the plan that are simply incompatible with defunding the police department as some on the council have pushed to do."

Aniya’s family has established a GoFundMe page for her treatment and funeral expenses.

Minneapolis police are still investigating and urge anyone with information to report it to them or CrimeStoppers at 1-800-222-8477. Tips are anonymous and can be eligible for a reward.

The department said they have assigned six detectives to handle the case.

"KG needs the community’s help right now, so we can find who did this, and bring them to justice," Lt. Richard Zimmerman, of the Minneapolis Police Department Homicide Unit, said.

Stay with 5 EYEWITNESS NEWS and KSTP.com for updates on this news.