Experts weigh in on heat safety tips for people and pets

Minnesota is heating up this weekend.

The National Weather Service is already issuing an excessive heat warning, with a 106-degree heat index by Sunday.

“Oh man, it’s hot, but I enjoy this,” declares Hassan Yusuf, from Minneapolis. “I like to go for a run every day. I can’t do this in the winter, so I’ve got to enjoy it.” 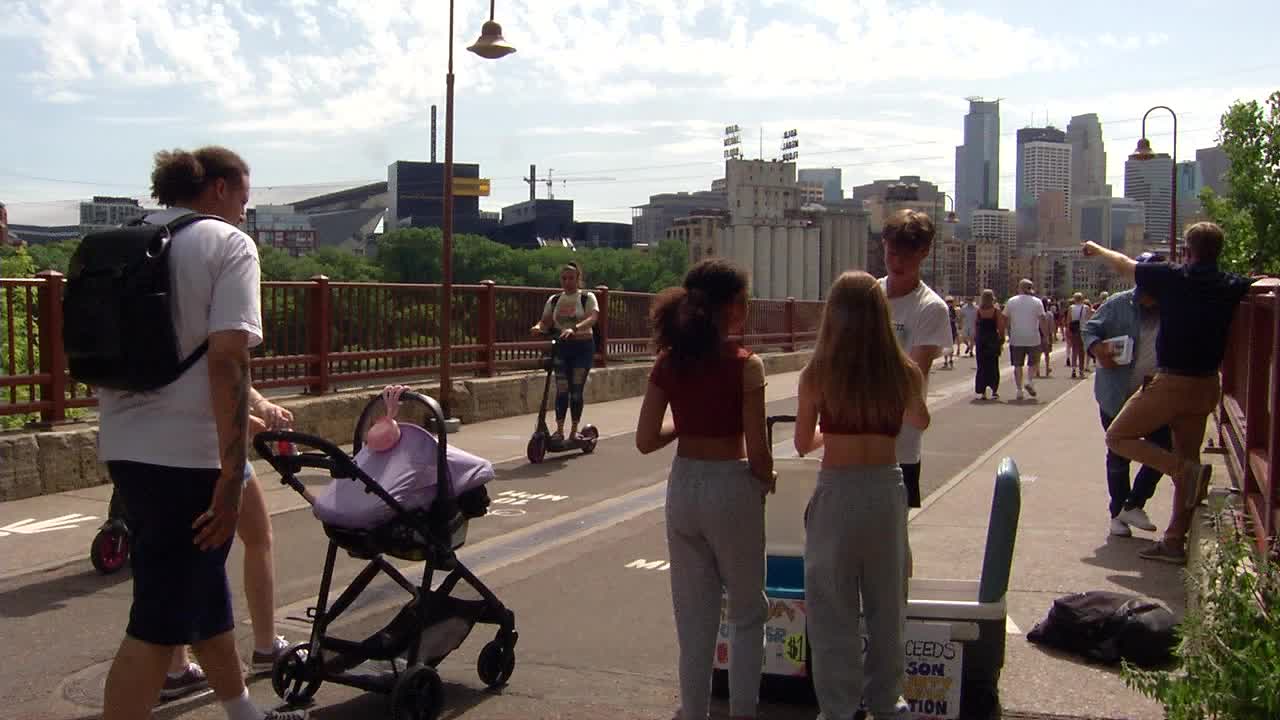 “Your body is incredibly sensitive to being dehydrated,” she explains. “Even if you don’t think you’re dehydrated because you’ve had enough to drink. If you have that sensation, follow the lead of what your body is telling you and get some extra fluids in your body.”

On Saturday — your phone might say it’s 82 or 83 degrees in the metro.

We decided to use a digital thermometer to measure temperatures on the ground.

111-degrees on a blacktopped surface.

A sidewalk in the sun measures about 102 degrees.

But a bricked walking area in the shade measures only 87 degrees.

Experts say the change in temperatures is a big deal to our canine companions.

“If you take your shoes off or take your socks off and walk on asphalt, and you can’t walk on it, don’t walk on it with your dogs,” he advises. “What it does, it just heats up the dog faster and they’re already in a situation where they’re hot. So I don’t necessarily see third or second degree burns, but it just exacerbates the dogs that are already warm.”

Ruhland says owners should consider taking plenty of water along on walks — ice water, he says is even better.

He adds your dog will likely be panting more in the heat — a way to cool off.

“When they do that, they’re actually passing warmer air that’s in their capillaries in their lungs, and that’s actually cooling them,” he says. “Just like the way we sweat the evaporation that’s pooling off of us as a cooling process.”

Ruhland also cautions against leaving your pet inside a car.

“It only takes a matter of ten to fifteen minutes in a black truck or SUV — the inside of those cars can get up to 170 degrees,” he notes.

Along St. Anthony Main, we met up with Nicole Johnson, who was keeping close watch on ‘Tribe,’ her ten-year-old corgi.

“He’s a dog with two coats of fur, so he gets especially hot,” she says. “His weather is in the winter. He loves to roll in the snow and sunbathe in it.”

Johnson’s plans for the next few days?

Scheduling cooler times for walks — and lots of water.

“We just walk him early in the morning and then maybe late in the afternoon, quickly, and then his longer walk in the evening,” Johnson says. “Just to take care of him, because he’s panting. We bring water, too.”

“Definitely I’d say, trying to get as much water as you can,” he says. “I’ll go out for a quick workout, a quick run, then to the lake.”

With the dog days of summer just around the corner, Minnesotans are trying to beat the heat, while staying safe.

“Just keep going,” Yusuf says. “You know I feel like that’s part of the journey. This is fun, being in the heat, burning more calories. Just make the most of it.”