Floyd’s brother, nephew and girlfriend all spoke before Lane was sentenced but the former officer offered no comment.

Floyd’s family asked for Judge Paul Magnuson to sentence Lane to the maximum penalty allowed but Floyd’s girlfriend offered some words of encouragement for Lane in her statement and said she doesn’t believe he’s a bad person.

“I believe that if you could go back in time, you would change what happened, not just for you but for Floyd as well,” Courteney Ross said.

Ross added that she believes Floyd would tell him, “… When you get out, find that hero inside you to make sure this never happens again.” 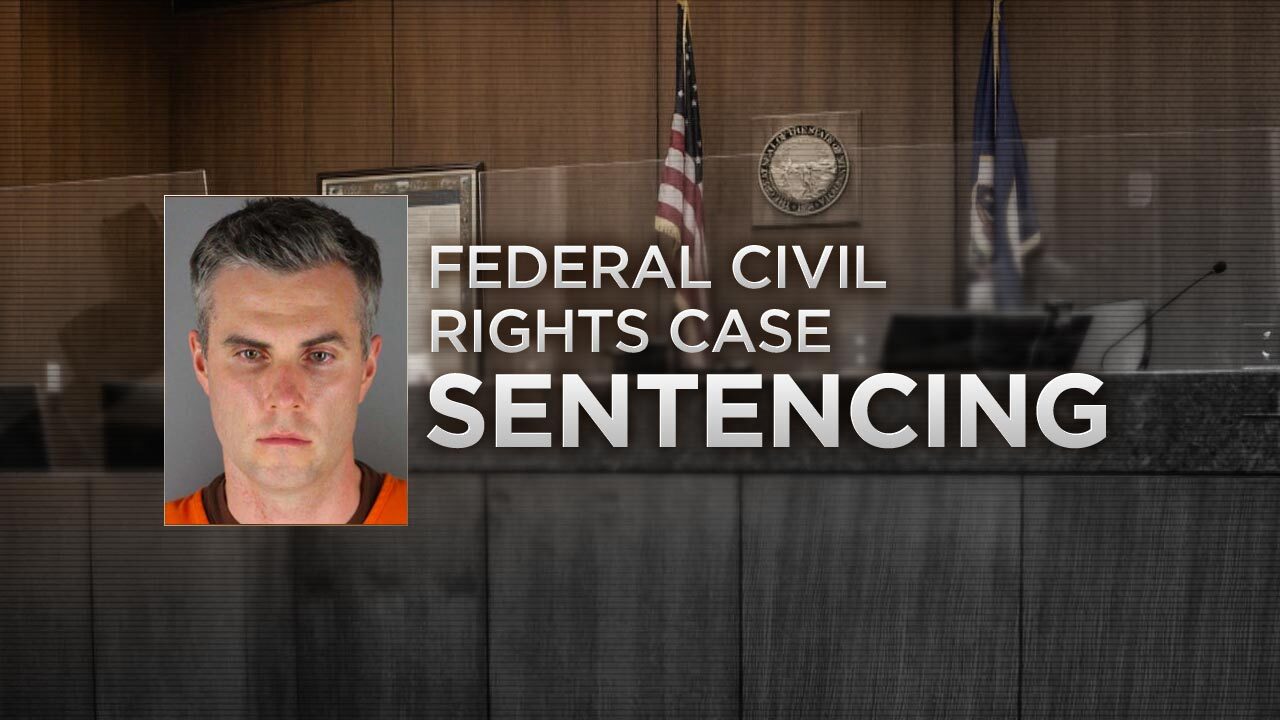 Prosecutors argued that Lane didn’t deserve any downward departure given his training, his actions that showed he knew what was supposed to be done but his inaction in doing any of those things, and the fact that he never accepted responsibility for his actions. The government asked for a sentence between 63 and 78 months.

“Even if the death wasn’t intended, a serious punishment is warranted,” prosecutor Manda Sertich said.

Just before handing down his sentence, Magnuson said, “The fact that you did not get up and remove Mr. Chauvin from Mr. Floyd when Mr. Floyd became unresponsive is a violation of the law, and for this violation, you must be punished,” but then noted his rookie status and the difficult position he was in as a new officer.

The judge also noted the number of letters he received on Lane’s behalf.

Judge Magnuson said he set a voluntary surrender date for October, which will follow the sentencing date set for the state case. Lane has also pleaded guilty to the state’s charge of aiding and abetting second-degree manslaughter in Floyd’s death. He is expected to be sentenced for that charge on Sept. 21.

After the sentencing, Ross and Floyd’s brother and nephew expressed disappointment in Magnuson’s decision.

“I think it’s insulting that he didn’t get the maximum amount of time,” Philonise Floyd, George Floyd’s brother, said.

Philonise went on to say Lane didn’t show empathy or compassion and called it terrible that he still got a lighter sentence than the guidelines called for.

“The problems still are going to exist until we take the corruption out of these courts,” he said.

Brandon Williams, George Floyd’s nephew, was more pointed in his criticism of Magnuson’s decision, noting that Lane performed CPR on Floyd when he was in the ambulance, so he knew what to do, but didn’t do it when George was alive.

“I’m angry and fed up,” Williams said multiple times after the sentencing.

Ross, too, was unhappy with the sentence handed down, saying that despite her statement in court that she doesn’t believe Lane is a bad person, she still believes he needs to be held accountable and shouldn’t have gotten as low of a sentence as he did.

She added that everyone should be held accountable for their actions and, “I believe officers should be held to an even higher standard, and once again we’re disappointed by the verdict today.”

“In the critical last minutes of George Floyd’s life, former officer Lane understood the seriousness of the situation,” U.S. Attorney Andrew M. Luger of the District of Minnesota said in a statement. “He knew that Mr. Floyd was in grave need of medical care, but he chose passivity rather than action. As a sworn law enforcement officer, he failed to uphold his duty to step in and save a man’s life.”

“The tragic death of George Floyd makes clear the fatal consequences that can result from a police officer’s failure to intervene to protect people in their custody,” Assistant Attorney General Kristen Clarke, for the Justice Department’s Civil Rights Division, added. “Had this defendant and other officers on the scene with Derek Chauvin taken simple steps, George Floyd would be alive today. This sentence should send a message that protecting people in custody is the affirmative duty and obligation of every law enforcement officer, regardless of one’s rank or seniority.”

“This was right around what I expected,” said Rachel Moran, an associate professor of law at the University of St. Thomas. “It’s a little bit on the lower side in terms of what the prosecution was asking for versus what the defense was asking for and that’s what Judge Magnuson did with Derek Chauvin as well.”

In May, Lane pleaded guilty to a state charge of aiding and abetting second-degree manslaughter in connection to Floyd’s murder. The sentencing is scheduled for September.

“I do think that could’ve affected the Judge’s decision,” said Moran. “Lane has already reached an agreement in his state conviction for a sentence of three years, assuming the judge accepts that agreement. What the judge did today will require Mr. Lane to serve a little bit more than two years in prison, which is about the same amount of time.”

Lane is the second of the four former officer involved in Floyd’s death to be sentenced in federal court. A sentencing date has not been set yet for Tou Thao and J. Alexander Kueng, who were convicted of two counts of violating Floyd’s civil rights.

“I think if Mr. Thao and Mr. Keung are watching this, they’re now seeing two officers in a row who got sentenced to less than what the government was requesting so they probably see a little bit of hope in that,” said Moran.

Thomas Lane, a former officer of the Minneapolis Police Department, will be sentenced Thursday for violating George Floyd’s civil rights in May of 2020.

A court docket states Lane will be sentenced at the federal courthouse in St. Paul Thursday at 10 a.m.

Lane was convicted of violating Floyd’s civil rights in February of 2022, and was found guilty of seeing Floyd in need and failing to help him.

Two other former officers – Tou Thao and J. Alexander Kueng – were convicted of the same charge. However, Thao and Kueng were also convicted of willfully failing to try to stop former Minneapolis police officer Derek Chauvin from using unreasonable force on Floyd.

Lane has also pleaded guilty to the state’s charge of aiding and abetting second-degree manslaughter in Floyd’s death. He is expected to be sentenced for that charge on Sept. 21.

CLICK HERE for full George Floyd coverage. A timeline can be found below of the events following Floyd’s death.

5 EYEWITNESS NEWS will continue to update this article as Lane is sentenced. Check back for updates.