At the State Emergency Operations Center (SEOC), phones are being boxed up and the tables are empty. It’s a sign of a calmer time after a record-setting activation.

In July, the SEOC ended its longest activation — 475 days.

“We didn’t know what we were up against,” said Joe Kelly, the director of Minnesota’s Division of Homeland Security and Emergency Management. “If I could pick one word, I would probably say relentless. It was always the next thing.”

Kelly coordinated the state’s multi-pronged response to the COVID-19 pandemic while managing the response to unrest after the murder of George Floyd in May 2020 and the subsequent trial of former Minneapolis police officer Derek Chauvin. In addition, the state experienced a dozen natural disasters. 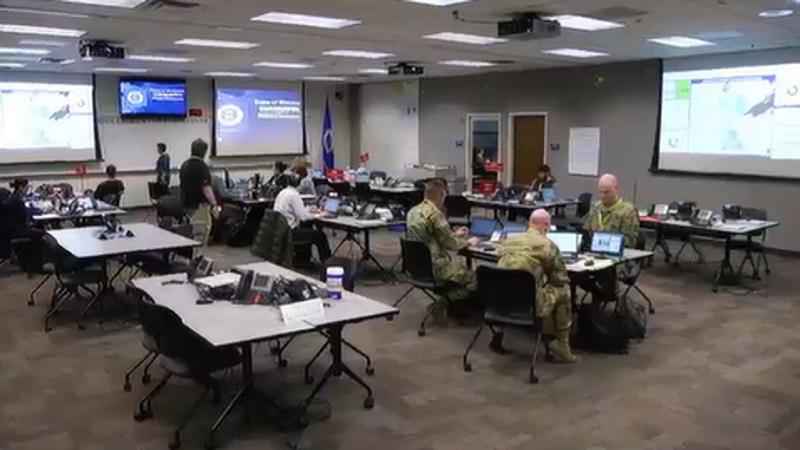 The SEOC activated on March 15, just about a week after the first COVID-19 case was discovered in Minnesota. Gov. Tim Walz, the Minnesota Department of Health, the state Department of Employment and Economic Development, Minnesota Management and Budget, and other state agencies came together with the Minnesota National Guard and Federal Emergency Management Agency to respond.

“We knew we had to bring everyone together to coordinate this well,” Kelly said. “At the beginning, we had nothing. We didn’t have masks, we couldn’t find hand sanitizer, and hospitals were short of what we eventually called critical care supplies. We had to figure out what do we do if hospitals get filled to capacity, where we have overflow capacity, and we had to figure out […] in nursing home residents and congregate living settings and how do we keep staff there?”

He said their strategy was based on the expertise of a health department team.

“And then just took human capital, energy, imagination and determination and just started doing the work,” he said.

There were as many as 250 to 300 people working in tandem at times, with some in the center, others working virtually and some out in the field.

“They were running a testing center at an armory someplace, or they were working in a warehouse that was procuring and storing and distributing face masks and shields and gowns and gloves," Kelly described.

Amid the pandemic, George Floyd was murdered on May 25, 2020. The unrest that followed moved to the forefront.

“I will never forget when it became obvious that things were going to get difficult on the street following the killing of George Floyd,” Kelly said. “I stood in the middle of the room and said, ‘OK, listen up everybody. If you are here only for the coronavirus response, I need you to leave by 3 o’clock. If you are here as part of the general team and you can help with the civil unrest, take a break and we’ll reconvene as soon as this place clears out.’"

He said their primary role was facilitating the activation of the National Guard and its mission. They also helped provide basic supplies to the law enforcement members that were called in to respond to the riots, according to Kelly.

5 EYEWITNESS NEWS asked Kelly whether there was a security concern at the SEOC during the unrest.

“I would say no, other than just generally because there was a lot of activity downtown,” he said. “We brought in a small team of National Guard to provide security here.”

Due in part to general security challenges, his team is currently in the process of designing and building a new SEOC in a metro suburb, a more strategic location. According to Kelly, the current SEOC in St. Paul is also too close to the Capitol. The Legislature approved $29.5 million for the new facility during the fall of 2020, and it’s expected to open in about two years.

As the historic activation continued, the team working out of the SEOC supported the response during Chauvin’s trial.

“We can fight coronavirus on the one hand and we can help keep the peace in the streets of Minneapolis, St. Paul on the other hand, but it’s going to be hard, and of course it was,” Kelly reflected.

During the spring of 2021, they also helped distribute and administer the vaccine. Kelly considers that a turning point in their operations.

“As we experience another surge in cases because of the delta variant, we’re much more capable of dealing with it,” Kelly said. “Health care, the doctors, the staff know how to treat COVID patients better, smarter, more effectively. We have the vaccines out there that are blunting and taking some of the energy out of it.”

When 70% of Minnesotans 18 and older received at least one shot of a vaccine, the activation ended. Testing volumes were also considered as part of the decision.

“Those volumes went down, the activity level went down to the point where we thought we can close this and get off this emergency footing and turn it over to the Department of Health,” Kelly said. “We can’t be in an emergency mode all of the time, we can’t sustain that effort so we have to learn how to get it to a point where we can manage it on a daily basis.”

The activation officially ended on July 2, 2021.

Kelly feels grateful as he reflects on the last year and a half.

“Just gratitude for just everybody — my fellow state employees, the governor and his leadership, people working in health care,” Kelly said. “My wife and two daughters all work in health care. Just gratitude for the historic effort everybody put into it and everyday Minnesotans who had to close their businesses, keep their kids home from school. We got through a truly historic event and I think Minnesota did well.”

Kelly is hopeful they won’t have to reactivate the SEOC, regardless of the rise in cases connected to the variants, pointing to increased supply levels and improved infrastructure.

"I think we have advanced far enough," he said.