For three-year-old Jordan Hampton and his family, this past holiday season has not been easy.

“It was very overwhelming for us,” recalls his mother Kristine. “Christmas Day, we just knew something wasn’t right.”

“For what he’s gone through, he’s a champ,” Jordan’s father, Dan declares, as he bows his head, wiping away a tear.

Jordan’s parents say during the week before Christmas, he wasn’t feeling well.

They note he had an up-and-down fever, that his skin was discolored, and that he was fatigued. 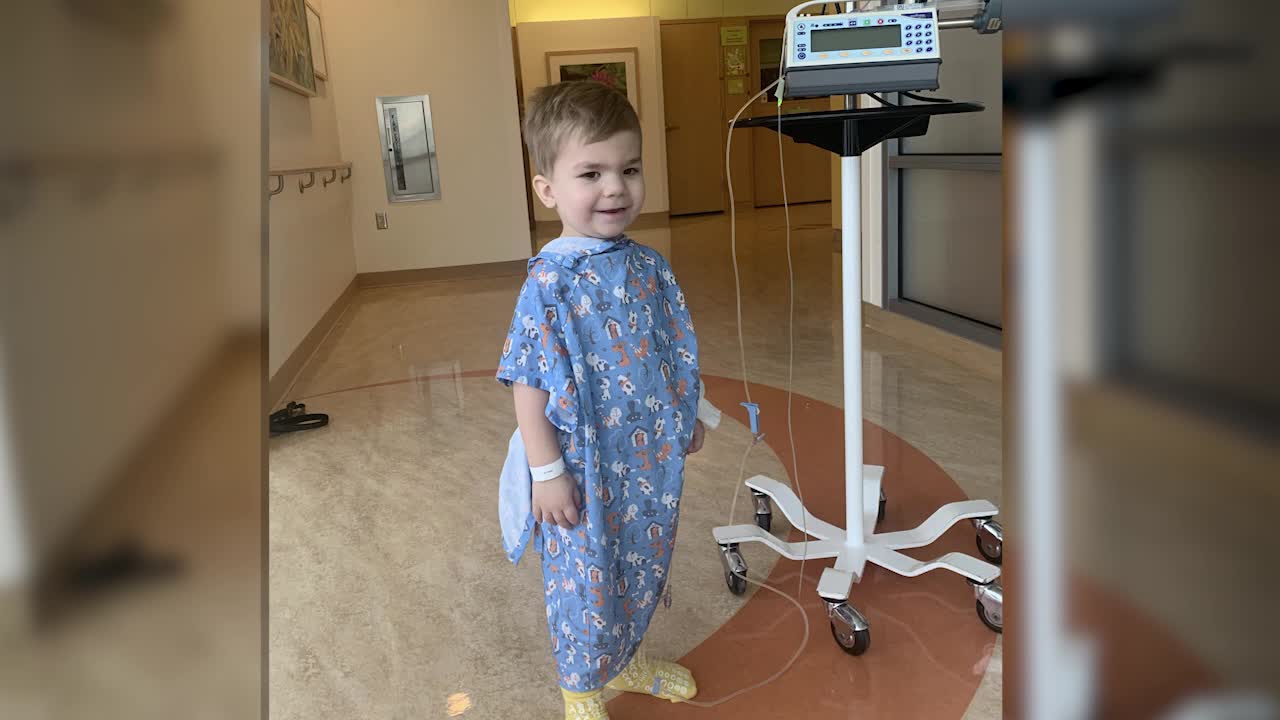 “We ended up bringing him on Christmas Eve to urgent care,” Kristine says. “We just didn’t feel like this was just a normal virus lasting as long as it did. The urgent care doctor said his skin doesn’t look right. They did some nasal swabs, some tests for COVID or influenza… they came back negative.”

She says by Christmas, he still wasn’t feeling well.

“We had a lot of emotions prior to the diagnosis,” Kristine recalls. “Scared, worried.”

He was diagnosed with acute lymphoblastic leukemia — or ALL, for short.

“This is something new to us,” Kristine says. “Cancer, we have not had to deal with, especially with our child. And so this was a hard pill to swallow. Is he going to survive? What’s the prognosis?”

Instead of Christmas at home, Jordan and his parents spent eight days at the hospital.

He began chemotherapy, and underwent more tests and blood work.

“Most people are not coming to the emergency room thinking their child’s going to have cancer,” explains Dr. Lucie Turcotte, an M Health Fairview Pediatric Oncologist. “They’re coming thinking they’re going to get treated with a course of antibiotics and go home.”

Turcotte, part of Jordan’s medical care team, says ALL is the most common type of cancer in children.

She adds about 3,000 children nationwide are diagnosed with ALL every year — and that there are about 45 cases annually in Minnesota.

“Fortunately, we’ve made huge strides in being able to cure these kids and allow them to live long healthy lives,” Turcotte notes.

She says with chemo and other treatments, the survival rate can be 85% or higher.

Those numbers are a sign of hope for the Hamptons.

“You look for belief in these situations, wherever you can get it,” Dan says quietly. “So that was a positive among a lot of negatives for us.”

These days, you’ll find Jordan playing with his mom and his six-and-a-half year-old sister Brooklyn.

He takes a half-dozen medicines daily to ward off pain and nausea — and will initially undergo 28 days of at-home and in-clinic chemo treatments.

Turcotte says Jordan has a challenging road ahead.

She notes those initial rounds of chemo will be critical to see if his body is responding to treatment.

After that, he’ll face two-and-a-half years of maintenance-type chemotherapy.

But Turcotte says there are other treatment therapies as well.

“We’ve developed ways to target the specific cancer cells with what we call immune-therapies or targeted therapies,” she explains. “We have new intensive therapies where we actually use the body’s own immune system to engineer cells and target the cancer cells. There’s a lot of very hopeful options, even if that first month doesn’t go as we hoped.”

Meyers, a neighbor of the Hamptons and a neonatal ICU nurse, is coordinating a GoFundMe effort to help with Jordan’s medical and other expenses.

She says the Elk River community is rallying around the Hampton family, including at the fire department, where Dan is a volunteer.

“You have nothing else but to just hope that people can relate and find it in their heart to find a way to help,” Meyers says. “You know you need a village… it takes a village. If you couldn’t give, just prayers and thoughts. But for my co-workers, I was like two to five dollars, anything that can help for a family that now has to go to one income.”

“It gives me goosebumps,” Turcotte adds. “It’s amazing to hear that one small child can bring together so many people. People want to help kids and help families.”

For now, Kristine has put her home daycare business on hold, to care for Jordan.

Meanwhile, the family expects Jordan’s hair will likely begin falling out in a few weeks.

So his father and several other family members are planning to shave their heads as a way of supporting him.

There is a lot of love in this house — and hope.

Perhaps the best medicine of all.

“It’s highly treatable, very high success rate,” Dan notes. “And a three-year-old versus a teenager, whatever, they do quite well, being quite young. Their bodies are very resilient. You’ve got to be optimistic every day, and it’s really your only choice.”

“He’s been so brave — that just shows us how amazing he’s going to be through this,” Kristine says. “Our support and staying positive is only going to help him — and just knowing that the prognosis is looking good for him, that keeps us extremely hopeful.”

You can find out more about the GoFundMe for Jordan here.