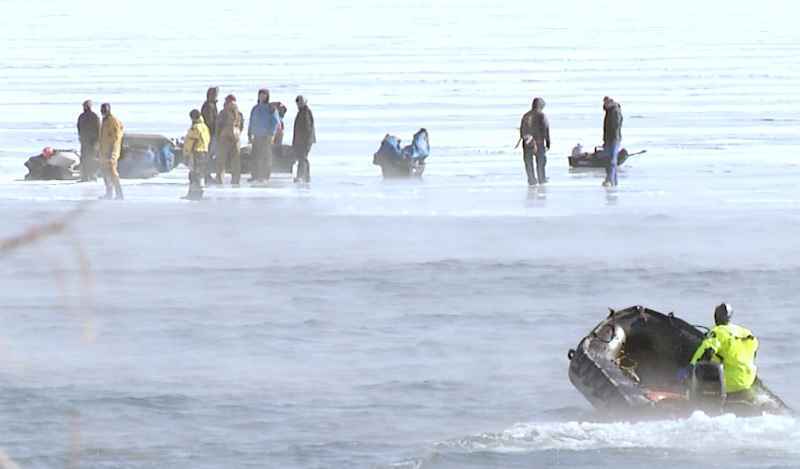 Anglers getting rescued from ice that broke off. [WDIO]

Duluth firefighters rescued 26 anglers who became stranded on Lake Superior off the Endion neighborhood late Tuesday morning when the ice cracked and shifted.

One fisherman told reporting partner WDIO that they heard a few small pops followed by a loud crack. Some anglers got off the ice right away but others stayed.

"We’ve gotten these calls before. Firefighters are prepared. They know the drill, and they did another excellent job," shared assistant chief Dennis Edwards.

He cautioned that you have to watch the ice thickness, wind direction, and how far the ice is out on Lake Superior. There are a lot of different factors.

Some of the anglers on Tuesday had never been out on the big lake before for ice fishing.

Phil Besonen made it off before the rescue. "We heard a few cracks, and a pretty good pop. We looked out the window and saw a crack, and then in a matter of minutes, saw it was wide open."

He and his friend packed up as quickly as they could and made it to shore. "It was my first and last time out on the big lake," he said.

Firefighters rescued the anglers with a boat as the crack continued to widen. The department explained that their crews used a boat without a motor along with a motorized inflatable boat to get the group to safety.

Some called it scary while others called it just a boat ride.

The fishing gear was left on the ice as boats pick up the anglers to bring them to shore.

There have been no reports of injuries. According to the department, within an hour of the original call, the fire department had rescued 26 anglers.

One angler had started walking towards Park Point. The St. Louis County Rescue Squad responded with their airboat and picked up the person.

Lake Superior as a whole is just 10% covered with ice, well below average for this time of year, according to the National Oceanic and Atmospheric Administration. That allows ice along the shore to suddenly drift toward open water depending on weather and water conditions.