As Aaron Kania walks slowly along a dirt road that borders McDougal Lake, he gazes at a forest that’s been reduced to black, charred earth.

"It’s something you’ll never forget in your lifetime," Kania said.

The area south of State Highway 1 was one of the hardest-hit areas in the Greenwood Fire’s footprint. Exposed soil is mixed with ash and other debris. The air still smells as though a campfire is burning nearby. Trees that grew for hundreds of years are now sticks and stumps.

Kania, a forest ranger, was working on Sunday, Aug. 15, the day a lightning strike sparked the massive wildfire in Superior National Forest. 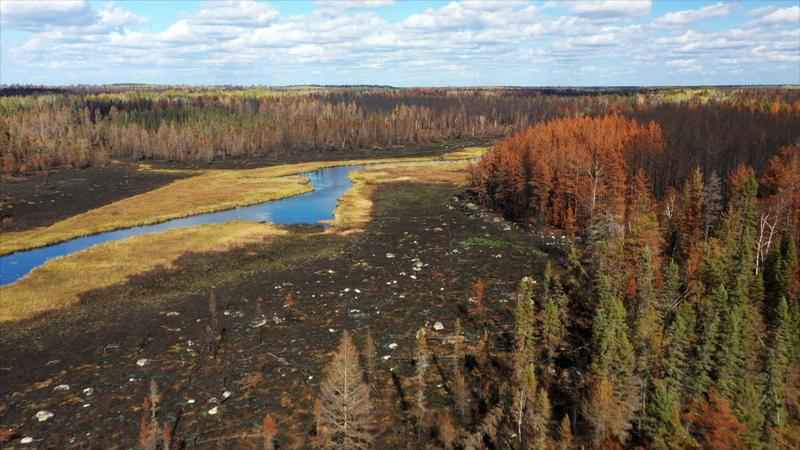 "We saw a cloud and it was the only cloud in the sky," he said, quickly realizing that cloud was a column of smoke. "Right from the time this began, we knew we were going to need extra resources out here."

The wildfire grew quickly in areas of the forest that were difficult to get crews into, Kania said. Dry conditions and fast-changing winds pushed the fire into new territory and forced evacuations of more than 280 structures.

By the end of its run, the Greenwood Fire burned 26,797 acres, or more than 41 square miles. The blaze destroyed 15 homes and cabins and leveled more than 50 sheds and outbuildings.

While fire crews had the majority of the flames knocked down in early September, officials predict the fire won’t be completely out until winter hits the Arrowhead and snow coats the landscape.

With the fire now at 80% containment, federal and state officials are working to survey the land and assess the environmental impact of the fire. Cabin and home owners are starting to sift through what’s left of their property.

But aerial images show just how sporadically the fire burned through the forest.

Kania said the patchwork of healthy and damaged forest is thanks, in part, to previous land management and prescribed burns that helped thin out dry and dead trees.

On the fire’s northernmost edge, only a few large trees stand in an open area of reddish dirt. Kania points out that the fire damage only goes about 4 feet up the tree from the ground.

"You can see on the base of these trees, how far up the fire climbed, and there’s no branches for it to connect to the top of the tree," he said. "When that catastrophic wildfire came in this direction, its intensity dropped down significantly."

Kania said, at that point, firefighters were able to control the fire from spreading further north. Using defensive burning tactics and other firefighting strategies, crews were able to slowly build containment lines around the edges of the fire.

Down the road, Edgar walked along a narrow path of turned-up dirt that a hotshot crew dug between the road and the river.

The control line helped slow the fire but Edgar said high winds carried embers across the water into an area where homes and cabins stood.

Pat Prochaska owns a cabin on McDougal Lake. The house’s surveillance cameras captured dramatic images of the fire burning onto his property.

"I felt like the cabin must be fine even though everything looked, like, crazy and destroyed," he said during an interview at his home in Minneapolis.

Prochaska’s cabin survived the fire with minimal damage but the rest of the family’s property was demolished.

"We were just amazed at how the shed … just totally was gone," he said. "I had this huge woodpile and, I mean, that was just totally gone."

In spots where the wildfire burned the hottest, Kania said there are signs of life returning to the area and evidence that the fire is helping the forest evolve.

Rivers are flowing stronger than at any point this summer. Wildlife has made its way back into the fire footprint to gather food for winter.

"Even where we’re standing, there’s pretty intense fire. But right here are trees that are alive," Kania said, motioning to the large trees that stand next to McDougal Lake. "Some of these trees here in a few years will be taller than us and then, eventually, they will become that next forest."