KSTP and The Associated Press

Authorities in western Wisconsin are trying to sort out multiple crashes along Interstate 94.

The State Patrol said in a statement that freezing rain early Thursday morning left the interstate between Menomonie and Black River Falls icy.

At about 5:45 a.m. a semi-trailer apparently slid in the median near Hixton and caught fire with two cars underneath it. Other crashes and run-offs occurred around the semi-trailer.

No one was seriously hurt but the crashes forced authorities to close both eastbound and westbound lanes.

Authorities add there were many other secondary crashes and run-offs in the same vicinity, and passengers of those vehicles were taken to a safe location by bus. 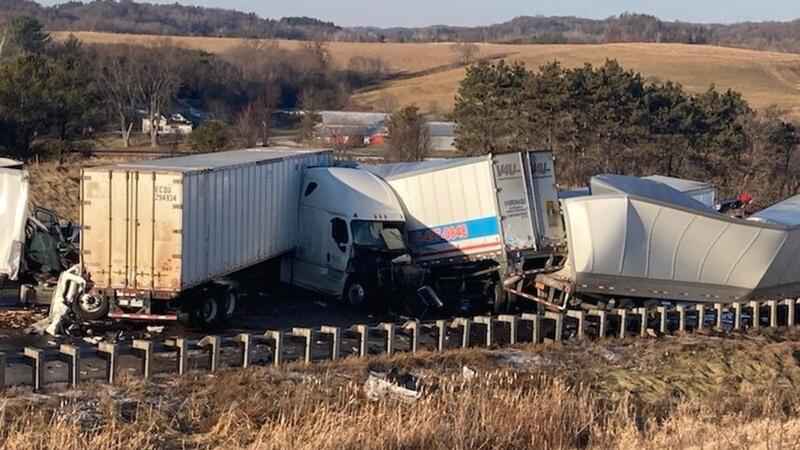 More than 100 vehicles were involved in a pileup on I-94 in western Wisconsin Thursday morning. [WQOW]

WITI-TV initially reported more than 100 vehicles were involved in a pile-up but State Patrol Lt. Tim Weiberg told Wisconsin Public Radio the number was closer to 40.

There were no fatalities and only minor injuries reported, he told the Journal Sentinel Thursday afternoon. Authorities hope to get both lanes open by early evening.

A re-route was created due to both east and westbound lanes of I-94 being closed. Eastbound lanes are closed from US 10 in Osseo County to WIS 95 in Hixton, while westbound traffic is closed from County HH in Foster to US 12/WIS27 at Black River Falls.

An earlier version of this story can be found below.

INITIAL REPORT: Authorities in western Wisconsin are trying to sort out a massive crash on Interstate 94.

The Jackson County Sheriff’s Department and the Wisconsin State Patrol didn’t immediately return messages from The Associated Press seeking details. Jackson County Emergency Management Director Kristina Page said in a brief telephone interview that she didn’t have any information but expected the State Patrol would issue a news release soon.