Former Minneapolis Police officer Derek Chauvin has been sentenced to 22½ years (270 months) in prison for the murder of George Floyd.

The punishment — which fell short of the 30 years that prosecutors had requested — came after Chauvin broke his more than yearlong silence in court to offer condolences to the Floyd family and say he hopes more information coming out will eventually give them "some peace of mind."

With good behavior, Chauvin, 45, could be paroled after serving two-thirds of his sentence, or about 15 years.

In imposing the punishment, Judge Peter Cahill went beyond the 12 1/2-year sentence prescribed under state guidelines, citing "your abuse of a position of trust and authority and also the particular cruelty" shown to Floyd. 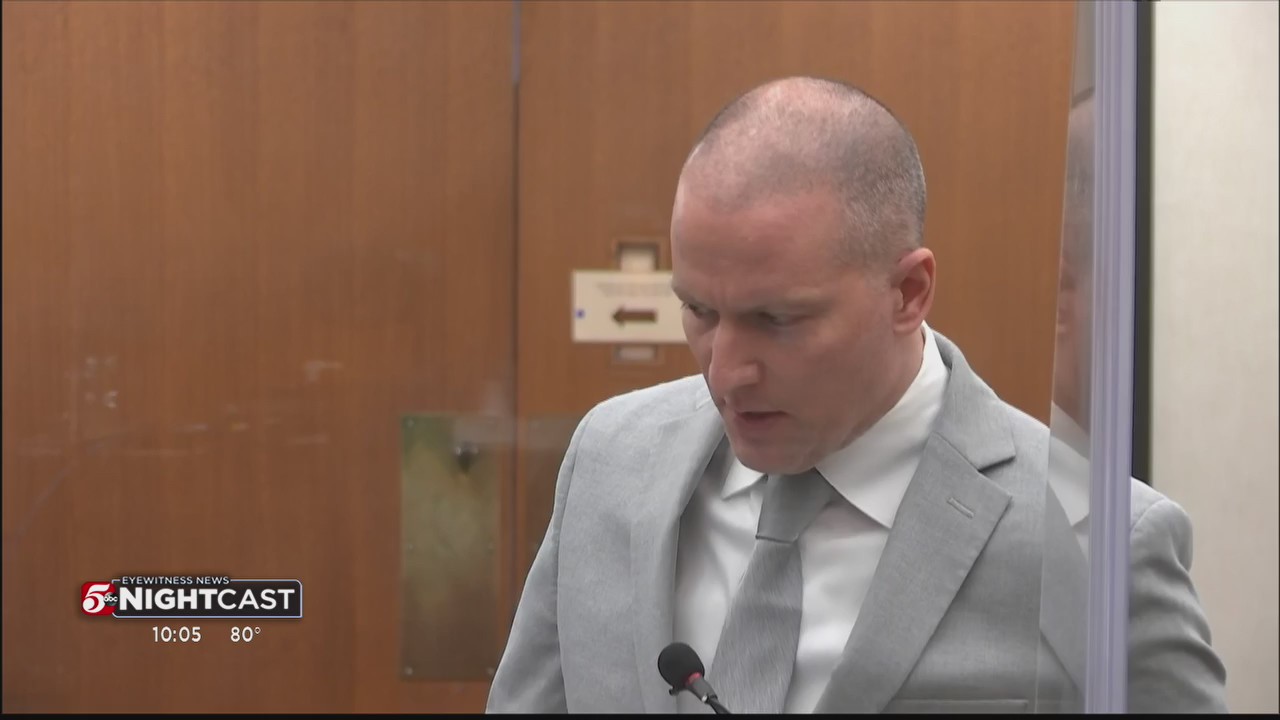 Chauvin was immediately led back to prison. As with the verdicts in April, he showed little emotion when the judge pronounced the sentence. His eyes moved rapidly around the courtroom, his COVID-19 mask obscuring much of his face.

Chauvin was convicted of second- and third-degree murder, as well as second-degree manslaughter.

Cahill handed down the sentence Friday afternoon in a Minneapolis courtroom. He noted that Chauvin has 199 days of credit already served. He is also prohibited from possessing any firearms, ammunition, or explosives for the rest of his life. Chauvin will also be required by law as a predatory offender.

On Friday, Chauvin, who did not testify at his trial, removed his mask and turned toward the Floyd family, speaking only briefly because of what he called "some additional legal matters at hand" — an apparent reference to the federal civil rights trial he still faces.

"But very briefly, though, I do want to give my condolences to the Floyd family. There’s going to be some other information in the future that would be of interest. And I hope things will give you some peace of mind," he said, without elaborating.

In asking that Chauvin be left off on probation, defense attorney Eric Nelson called Floyd’s death "tragic" and said that Chauvin’s "brain is littered with what-ifs" from that day: "What if I just did not agree to go in that day? What if things had gone differently? What if I never responded to that call? What if, what if, what if?"

Floyd’s family members took the stand and expressed sorrow about his death. They asked for the maximum penalty.

"We don’t want to see no more slaps on the wrist. We’ve been through that already," said a tearful Terrence Floyd, one of Floyd’s brothers.

Floyd’s nephew Brandon Williams said: "Our family is forever broken." And Floyd’s 7-year-old daughter, Gianna, in a video played in court, said that if she could say something to her father now, it would be: "I miss you and I love you."

Prosecutor and Assistant Attorney General Matthew Frank asked the judge to exceed sentencing guidelines and give Chauvin 30 years in prison, saying "tortured is the right word" for what the officer did to Floyd.

"This is not a momentary gunshot, punch to the face. This is 9½ minutes of cruelty to a man who was helpless and just begging for his life," Frank said.

Chauvin’s mother, Carolyn Pawlenty, appeared in court to plead for mercy for her son, saying his reputation has been unfairly reduced to that of "an aggressive, heartless and uncaring person" and a racist.

"I can tell you that is far from the truth," she told the judge. "I want this court to know that none of these things are true and that my son is a good man." She added: "Derek, I want you to know I have always believed in your innocence, and I will never waver from that."

"I will be here for you when you come home," she said. She added that Chauvin is a "good man."

According to the Associated Press, Philip Stinson, a criminal justice professor at Bowling Green State University, said 11 non-federal law officers, including Chauvin, have been convicted of murder for on-duty deaths since 2005. The penalties for the nine who were sentenced before Chauvin ranged from six years, nine months, to life behind bars, with the median being 15 years.

In addition to the conviction and sentencing by the state of Minnesota, Chauvin also faces federal charges.

Floyd was killed on May 25, 2020, while being arrested on the corner of E. 38th Street and Chicago Avenue in south Minneapolis. Chauvin held his knee on Floyd’s neck for nine minutes and 29 seconds, all stemming from Floyd allegedly using a counterfeit $20 bill.

Ensuing protests erupted around the world in response to the incident. The Minneapolis Police Department’s Third Precinct was burned down a few days after the death of Floyd.

The trial consisted of multiple testimonies from the witnesses who were at the scene that day outside of Cup Foods, as well as some current and former officers, use of force experts, and medical professionals. On April 20, he was convicted of all three charges by the jury.

The other three officers involved in the incident — J Alexander Kueng, Thomas Lane and Thao Tou — are set to have their trial take place in March 2022.

"Minneapolis has been at the center of a centuries-in-the-making reckoning around racial justice. The guilty verdicts handed down in the trial of former officer Chauvin for the murder of George Floyd marked an important step toward accountability from law enforcement that has been far too rare in our criminal justice system. As today’s sentence delivers an additional layer of legal accountability, the work underway to advance meaningful police reforms and structural change must and will continue in full in Minneapolis."

"Today, Judge Cahill gave Derek Chauvin a historic sentence. This is a positive step toward justice, but our work is not done. We’ve known all along that accountability in the courtroom is not enough.

"The statements today from George Floyd’s family and members of the community were painful but powerful. Now, as Derek Chauvin faces years behind bars, we must come together around our common humanity and continue on towards justice for all."

To see the full, 22-page sentencing document submitted by Cahill, see below or click here if on a mobile phone.

This is a breaking news story. KSTP is working on confirming more details and will update this story. Be sure to refresh your page for the latest information.