The Richfield Police Department said they arrested two suspects in connection to the deadly shooting at the South Education Center in Richfield.

Officers said they also recovered a handgun, according to a news release sent Tuesday night.

Police said they are not searching for any additional suspects, but continue to process evidence.

Additional information is expected to be shared on Wednesday. 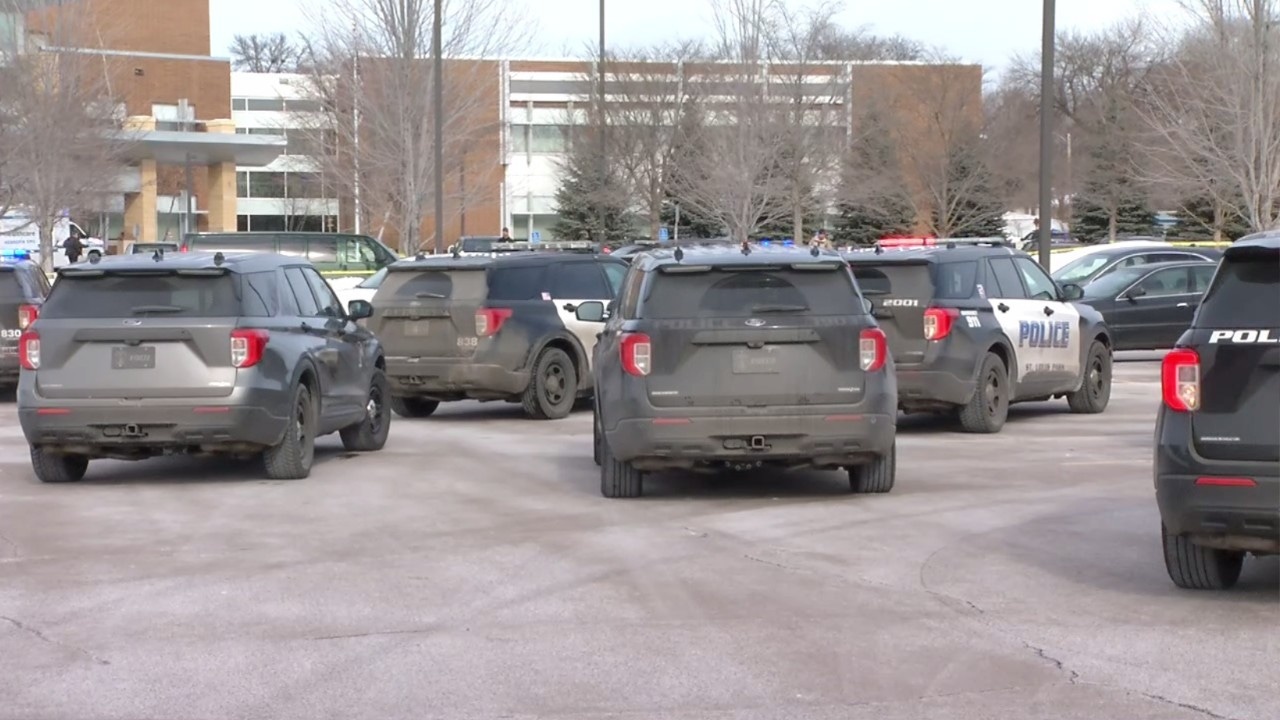 Squad cars are parked outside South Education Center in Richfield after two students were shot outside the school Tuesday, Feb. 1, 2022. (KSTP)

Officers responded to the shooting just after noon in the area of West 75th Street and Penn Avenue South. Officers arriving at the scene found the two students on the sidewalk outside the school, Richfield Police Chief Jay Henthorne said in a news conference.

The students were transported to Hennepin County Medical Center, Henthorne said, where one student later died and the second remains in critical condition.

Law enforcement officials have not released the names of the victims, but friends and classmates identified the deceased student as sophomore Jahmari Rice.

Henthorne said the suspects had fled the scene right after the shooting.

Henthorne said area schools were placed on lockdown. Those lockdowns have since been lifted.

Law enforcement officials have determined there is not an ongoing threat to the public.

Around 5:10 p.m., the Richfield City Council released this statement regarding the incident:

“Like everyone in Richfield and the region, we are still processing the tragic school shooting that took place just after noon today at the South Education Center. These headlines appear far too often, and our hearts sink that such a tragedy has landed in our community. We join our partners at Intermediate School District 287, South Education Center, all Richfield families and students who are grieving.

“We were heartbroken to learn that one of the students was killed in the incident, and another is in critical condition. We offer our condolences to the family of the victim who was killed and our compassion to the victim in critical condition and to those directly impacted by the shooting.  We thank the brave school staff, teachers, police officers, firefighters and all cooperating jurisdictions for their assistance in responding to this incident.

“Richfield has long been a close-knit, safe and welcoming community. Everyone in our community deserves to feel safe in their schools and in their community, and today this safety was threatened. Please check-in on your neighbors, hug your children and be there for your friends and family.

“As more information develops on the situation, we will be updating the community.”

At about 2:30 p.m., Intermediate District 287 issued the following update:

“Earlier this afternoon a reported school shooting took place at the South Education Center. While this tragic situation did not involve any of our Transition Plus students or staff, it is something we are watching closely. District 287, which operates out of the South Education Center, is one of our partners. At this time, we do not have any additional information. We have communicated with our families who have students in Transition Plus and will ensure our SEC students and staff have additional mental health support this week. We will communicate more information when we have it.“

South Education Center will be closed Wednesday and Thursday to give students “time and resources to process the trauma from today’s events,” Principal Deb Carlson-Doom told families in a letter Tuesday evening. The school will have “robust mental health support waiting” when students return to class on Friday.

Earlier, a 5 EYEWITNESS NEWS crew that arrived at the scene reported Hopkins, Eden Prairie and St. Louis Park police were among the law enforcement officials at the scene.

FBI agents and special agents from the St. Paul division of the Bureau of Alcohol, Tobacco, Firearms and Explosives (ATF) were also at the scene.

A Hennepin County Medical Center ambulance was visible, as was a Richfield Fire Department engine.

Crime scene tape had been strung up in the area.

Gov. Tim Walz said he was being briefed on the situation.

“Our Department of Public Safety is in touch with local law enforcement and we are monitoring the situation closely,” Walz said in a statement via social media.

As a dad, I know that hearing of a shooting by a school is a parent’s greatest fear. Minnesotans deserve to know that when they send their kids to school, they will come home safely.

My prayers are with the students, parents, and teachers whose confidence in that expectation has been shaken today. We need more than words, though—we need action. We need action to get guns off the streets and prevent violent crime in the first place. I remain committed to working with officials at all levels of government to seek needed change.

We know that one young person will not come home to their family tonight. My heart breaks that a young life was lost as the result of gunfire.

Thank you to the police officers and school personnel who rushed to the scene and helped ensure the students’ safety.

We are coordinating with local law enforcement and have offered the assistance of additional state resources as we continue to gather information.