On Wednesday, the jury-selection process continued in the trial of Derek Chauvin. Two more jurors have been added, totaling five. Nine more seats remain to be filled.

Court was in session as of 8 a.m., and the jury process began at 9 a.m. Nine jurors were addressed on Wednesday, with one of them choosing to opt-out due to age. The potential juror is in her 80s. Judge Peter Cahill said it is a right for her to be excused of jury duty, as anyone 70-plus has that option.

Cahill seated two more jurors to go with the three picked Tuesday for Chauvin’s trial on second-degree murder and manslaughter charges. It’s been a grinding process during which attorneys ask prospective jurors one by one whether they could keep an open mind, what they think of the criminal justice system and racial justice issues, how they resolve conflicts and much more.

In a separate development, the Minnesota Supreme Court declined to hear Chauvin’s appeal to block a third-degree murder charge from being reinstated. At issue is whether the conviction of another former Minneapolis police officer in the unrelated killing of an Australian woman established a precedent for prosecutors to restore a third-degree murder count that the trial judge dismissed earlier. The Minnesota Court of Appeals last week said it settled the law with its ruling last month affirming the conviction of Mohamed Noor in the 2017 shooting death of Justine Ruszczyk Damond.

Late Wednesday night, the Minnesota Court of Appeals offered clarity to a decision issued by the Minnesota Supreme Court earlier in the day, meaning the trial will proceed and Judge Peter Cahill will decide on the third-degree murder charge. 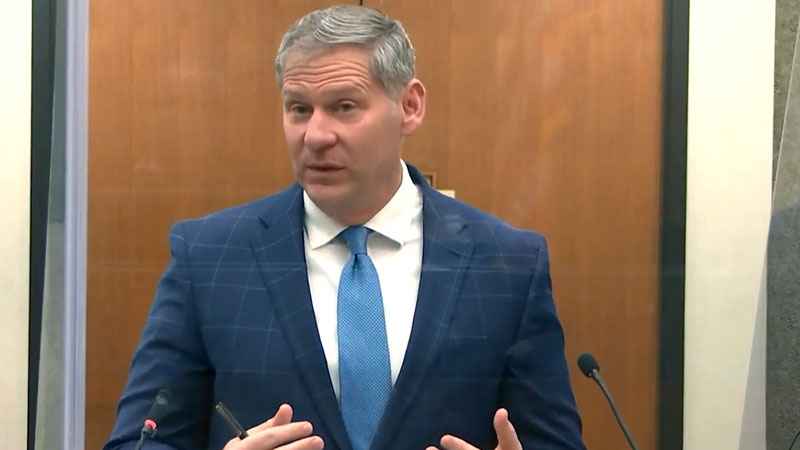 In this image taken from video, prosecutor Steve Schleicher questions a potential juror as Hennepin County Judge Peter Cahill presides over jury selection at the Hennepin County Courthouse in Minneapolis, Minn., Wednesday, March 10, 2021, in the trial of former Minneapolis police officer Derek Chauvin, accused in the May 25, 2020, death of George Floyd. [Court TV/Pool via AP]

The Minnesota Court of Appeals ruled the Minnesota Supreme Court’s decision to not review the potential reinstatement of a third-degree murder charge against former officer Derek Chauvin has nullified the state’s motion to stay the trial.

The new decision from the state’s highest court left open the possibility that Cahill could add the charge back, lessening the chances that Chauvin’s trial would be delayed over the dispute. The conventional legal wisdom is that giving the jury another option for convicting Chauvin of murder raises the chance of a conviction.

Cahill noted the ruling during a break and told the prosecution and defense that they will discuss next steps Thursday morning before jury selection begins for the day. He noted that there are still some legal issues left to be decided before resolving that dispute.

Two more jurors were added to the jury. They include a white man in his 30s and an African immigrant in his 30s or 40s.

Here is a more detailed look at the two new jury members:

Juror No. 20 became the fourth confirmed member of the jury on Wednesday.

He is described to be a white man in his 30s originally from central Minnesota. The man works in sales management. He said he was aware of the trial happening but doesn’t know specific details of the case other than witnessing the video of Chauvin kneeling on George Floyd’s neck. Despite forming his opinion from the video alone, he says he is willing to set aside differences in favor of facts and evidence presented.

The man mentioned he has a wedding scheduled in Florida, which to his and his fiance’s dismay could be moved due to the trial. However, he said it was going to be a chance anyways with the COVID-19 pandemic.

"We’ll do our best to get you to your wedding," Cahill said as he informed the man he was on the jury. "Go ahead and throw me under the bus with your fiancée."

In regards to the Black Lives Matter movement, he says he doesn’t understand why others "wouldn’t support the fact that Black lives do matter." In comparison, he stated that the "Blue Lives Matter" mantra is "a rip-off" of Black Lives Matter. However, he believes that entire police departments shouldn’t be to blame for things completely, but acknowledges that there are "bad cops" that exist within the criminal justice system. He thinks that police don’t get the respect they deserve.

"Are there good ones? Yes. So I don’t think it’s right to completely blame the entire organization," he told the court under questioning from prosecutor Steve Schleicher.

He also said he would be more inclined to believe an officer, all things being equal, over the word of another witness. But he maintained he would be able to set aside any ideas about the inherent honesty of an officer and evaluate each witness on their own.

When asked a question about being a season ticket holder for the Minnesota Vikings and the social justice stances the team has made, he responded that all players should feel free to express whatever protest or statement they want to make.

He also believes that white people and Black people are treated differently when it comes to justice.

Juror No. 20 was the first potential juror seen on Wednesday.

Juror No. 27 became the fifth member to serve on the jury. He is described to be an African immigrant in his 30s or 40s.

The man, who came to the United States 14 years ago and is multilingual, works in informational technology. He moved to the Midwest and completed his schooling in the region. He moved from Nebraska to Minnesota in 2012. The man says he holds a management position with his company and overlooks eight other employees. He says he deals with a lot of conflict and problem solving because of his job. His first language is French, followed by English.

The man said in court that he does not use social media, as he prefers a private life and protection of his data. He said he was shown the viral video of Floyd’s death from a friend’s phone, and said from that video alone, he formed a negative opinion of Chauvin. But, he added in court, "I didn’t know what happened before the video." He reassured the court that he could be impartial during the trial.

When asked if he had spoken to anyone about the incident, he said he did with his wife, saying to her "it could be anyone — you, me or anyone else."

He said the aftermath of the unrest and riots that ensued had people in his community "not OK with the looting." He added that people in his community were understanding of the protests, however. On the questionnaire, he said he was in favor of the Black Lives Matter movement, saying that they matter more because they are a marginalized community. He says that police lives matter as well, as he believes that all lives have meaning and purpose. He added that police need to feel safe to do their jobs.

He said in court that he is against defunding police, as he thinks police are necessary for communities.

"While I necessarily might not agree with the police action in some situation, I believe that in order for police to make my community safe they have to have the money," he said.

He strongly agrees that police in his community makes him feel safe. His community wasn’t specified — jurors are being drawn from all over Hennepin County, which includes Minneapolis and many of its suburbs.

"In my community, I think when there is suspicious activity the police will stop by, they will ask a question," he said. "I think that sense of community is all we want right? We want to live in a community where we feel safe regardless of race, color and gender."

The jury now consists of three white men, one African immigrant, and a woman, who is a person of color.

Schleicher used a peremptory challenge Wednesday to remove from the panel a woman who has a nephew who’s a sheriff’s deputy in western Minnesota. She said she was dismayed by the violence that followed Floyd’s death.

“I personally didn’t see any usefulness to it,” she said. “I didn’t see anything accomplished by it, except I suppose bring attention to the frustrations of the people involved. But did I see anything useful coming out of the burning of Lake Street and that sort of thing? I did not.”

The court will reconvene with nine more potential jurors Thursday starting at 8 a.m.