Monday marked the sixth of the Derek Chauvin jury-selection process. Two more jurors were selected, filling nine spots on the jury. Five more selections are needed, with two of those serving as alternatives.

The two selected on Monday include a Black man in his 30s and a white woman in her 50s.

Juror No. 52, described to be a Black man in his 30s, is a youth sports coach, works in banking and often finds himself keeping busy with sports, music and creative writing. He is the eighth juror picked to be seated. 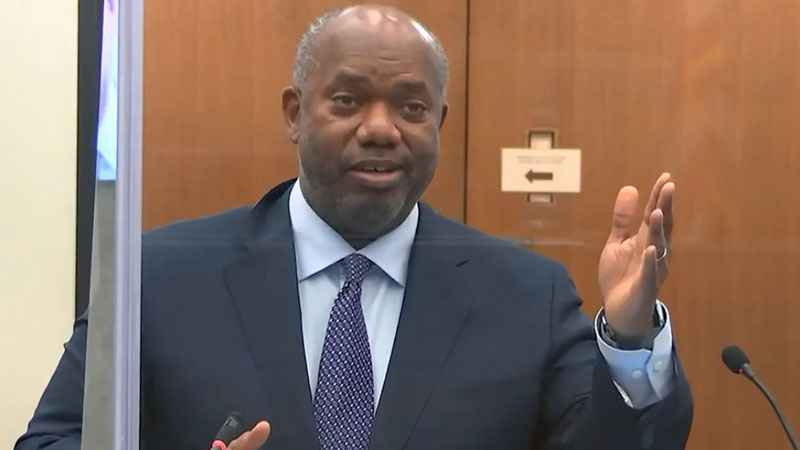 In this image taken from video, prosecutor Jerry Blackwell speaks as Hennepin County Judge Peter Cahill presides over pre-trial motions, prior to continuing jury selection, Monday, March 15, 2021, in the trial of former Minneapolis police officer Derek Chauvin, at the Hennepin County Courthouse in Minneapolis, Minn. Chauvin is charged in the May 25, 2020, death of George Floyd. [Court TV/Pool via AP]

He said he isn’t concerned for his safety if he were picked to serve on the jury.

Regarding the case, he knows "many basics" of it, including two autopsies being done on Floyd. He has a neutral opinion for Chauvin and George Floyd. He says he doesn’t think Chauvin had the intention to end Floyd’s life, but he was curious as to why the three other former officers did not intervene. The man says he has seen "about a minute" of the Floyd video.

"Why didn’t the other officers stop Chauvin?" he asked in court, adding that even if Chauvin didn’t mean to do what he did, someone still died.

The man says he witnessed a Minneapolis police officer "slam down someone for not cooperating quickly enough and use more force than was necessary." He adds he was walking by and acknowledges he doesn’t know the whole story from that isolated incident.

He said he doesn’t know enough information on defunding the police to form an opinion on it. Regarding the Black Lives Matter movement, he said he has a favorable opinion of them.

"Black lives just want to be treated as equals and not killed or treated in an aggressive manner simply because they are Black," he answered in the questionnaire. He further states that he believes Black Lives Matter is a statement, doesn’t see them as a movement or organization.

He also believes Blue Lives Matter was created to refute Black Lives Matter. He said he doesn’t think there should be a competition.

Juror No. 52 says he does not judge those who struggle with a drug abuse issue.

"That’s just something they’re struggling with… but they’re still like anybody else," he said to the state prosecutor on Monday.

Juror No. 55, described as a white woman in her 50s, is a single mother, works as an executive assistant at a health care clinic, sells Pampered Chef as a side hobby and rides a motorcycle.

She said she is a single parent. She states she has two children, one of them being an older teenager. She called it "kind of a thrill" to be selected for jury duty.

In regards to how she would view this case as a juror, she is willing to see all sides and make a decision based on facts. She is willing to reexamine her own views. She says she is in a position to uphold the law.

The woman said she learned of the Floyd video through the news media. She said she saw a short clip of the incident. She didn’t watch the full video. After watching the video, she couldn’t watch it any further, saying it involved a "human-to-human" fatal situation.

She agrees with the defense in saying the video is just a part of the story.

She states she won’t be able to form an opinion until she learns of all the facts. After initially answering the questionnaire that she viewed Chauvin in a "somewhat negative" way, she says "he’s innocent until proven otherwise."

The woman mentioned an incident where she saw police harass a young white man where she lives. In regards to that prior incident, she says it won’t factor into this case because they are separate incidents. She also empathizes with officers by saying "it’s a tough time" for them to work. She says it’s their job to keep people safe. She adds police should treat everyone the same.

She believes that all lives matter, and says it shouldn’t matter what race people are or what background they have for it to matter.

The woman says she understands the difference between a protest and a riot. She defined a protest as people walking around with signs and defined a riot as when harm to buildings is done to get attention. She was concerned the unrest could have filtered into her neighborhood.

Derek Chauvin trial: Get to know the jurors

She believes that the Black Lives Matter movement was started because "Black people didn’t feel heard." She adds it’s hard for her to say because she isn’t Black. In regards to Blue Lives Matter, she says she doesn’t know what it means. She initially thought it meant "everybody else." She had just been informed of what it meant Monday in court.

The woman noted during the incident where she saw the boy being "harassed" by police, she was told to "stay back" twice after showing concern for the situation. She told the state prosecutor that she felt like she "didn’t matter" to the police in that situation.

The first potential juror questioned Monday was quickly dismissed after volunteering that she had heard about the settlement and presumed it meant the city didn’t feel it would win the civil case.

"When I heard that, I almost gasped at the amount," she said, adding that she couldn’t promise she could disregard it.

Potential jurors questioned later didn’t mention hearing of the settlement, and neither attorneys nor the judge directly asked if they were aware of it, though the judge asked one prospective juror if he’d heard about civil litigation. The man said he did not, but ultimately was dismissed because he could not presume Chauvin innocent.

Thirty-seven total jurors have been addressed at this time.

Earlier Monday, attorney Eric Nelson asked the judge to delay the trial, saying the announcement of a $27 million settlement for Floyd’s family could make a fair trial impossible.

Nelson also raised the possibility of renewing his previously unsuccessful motion to move Chauvin’s trial to another city.

"I am gravely concerned with the news that broke on Friday," Nelson said, adding that the announcement "has incredible potential to taint the jury pool."

“We’ve got a mayor who is a lawyer by trade, he should know better,” Nelson said. “And obviously, Mr. Ellison’s son is a city council member and I’m not accusing Mr. Ellison of anything, I just want to make that very clear, but it is profoundly disturbing to the defense.”

“I know counsel is stating that he’s not accusing the attorney general of anything and for good reason because there’s nothing to accuse him of,” said Steve Schleicher, a member of Ellison’s prosecuting team. “His son’s on the city council, they’re not coordinating anything in this regard. The mayor is a lawyer, the mayor has a job to do and he certainly doesn’t take direction from me … In terms of the sort of inference that this was somehow coordinated by the state of Minnesota, it wasn’t.”

Schleicher told Cahill they “cannot and do not control the civil aspect of the case.”

He argued there is no reason to believe that jurors won’t be able to set their opinions aside as those already seated have done.

“Like everything else, take a step back, look at the actual effect,” said Schleicher.

Cahill pressed Schleicher about whether he agrees it’s unfortunate timing.

“It’s certainly not my preference, Your Honor,” said Schleicher. “I don’t even know which way that cuts, if that cuts for us. If that cuts against us.”

Cahill responded, “It cuts, that’s the concern. And I think the defense has a legitimate concern. I think even the state has a concern.”

Cahill said he would take the motion to delay the trial under advisement. He also agreed to bring the first seven jurors seated back to be questioned about the settlement, as requested by Nelson.

“I wish people would, the city officials would, stop talking about this case so much, but at the same time, I don’t find any evil intent that they’re trying to tamper with this criminal case," Cahill said.

Cahill told the prosecution and defense teams he believes it was a decision based on an analysis of the cost of a settlement.

University of St. Thomas School of Law professor Rachel Moran doesn’t believe the settlement news gives either side a clear advantage or disadvantage.

“If that information does get out to the prospective jurors, on the one hand, they could say the family has now been compensated, the criminal trial is less significant. While on the other hand, you could take this as an admission Derek Chauvin was guilty even though the standards are different,” Moran. “I don’t think it’s so obviously favorable to one side or another that it necessarily biases the jury in any particular direction.”