On Thursday, three more jurors were seated for the Derek Chauvin trial. The total stands at 12, with two more seats to fill. The remaining seats will serve as alternatives.

The white registered nurse in her 50s assured the court that she wouldn’t draw on her medical knowledge at Chauvin’s trial. The Black woman in her 60s said she didn’t watch the entire bystander video of Floyd’s arrest and didn’t know enough to form a firm opinion of Chauvin or George Floyd.

The 12th juror, a white woman who works in the commercial insurance business, said she has experience with someone who struggled with alcohol and might view someone who uses drugs "cautiously." She said she might be fearful they could act violently or aggressively when under the influence. 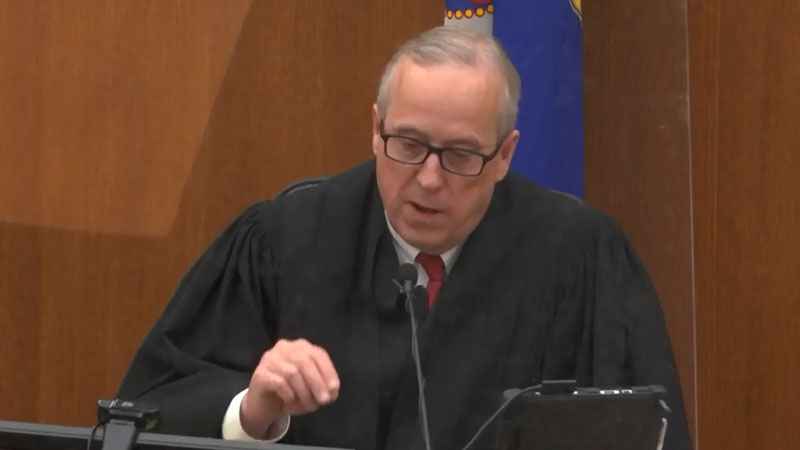 In this screen grab from video, Hennepin County Judge Peter Cahill presides over jury selection, Wednesday, March 17, 2021, in the trial of former Minneapolis police officer Derek Chauvin, in the May 25, 2020, death of George Floyd at the Hennepin County Courthouse in Minneapolis, Minn.[Court TV, via AP, Pool]

Still, the woman said she doesn’t ascribe to the sentiment that someone who uses drugs or doesn’t cooperate with police should be treated poorly. "If someone uses drugs, I don’t think there should be ramifications of violence for that," she said.

The first juror selected Thursday was questioned extensively by attorneys and Judge Peter Cahill about her experience as a nurse, whether she has ever resuscitated anyone and how she would view medical evidence in the case.

The woman said she would draw upon her knowledge to evaluate medical testimony and that she recognizes the amount of time a person can be without air before going unconscious. At one point, Cahill told her: "You can’t be an expert witness in the jury room."

She said she could refrain from relying on her knowledge.

The second juror, who worked in marketing before retiring and currently volunteers with underserved youth, said she watched the bystander video of Floyd’s arrest for about four or five minutes, then shut it off because "it just wasn’t something that I needed to see."

She somewhat agreed that Black people and other minorities do not receive the same treatment as white people in the criminal justice system. She had a very favorable view of the Black Lives Matter movement, writing in her questionnaire "I am Black and my life matters."

She has a neutral view of Blue Lives Matter, saying everyone is important and that she has a relative who is a Minneapolis police officer.

Potential jurors excused Thursday included a woman who said she had been constantly exposed to news of Floyd’s death and that the city’s settlement pushed her to favor the state’s position, and a man who had a deep mistrust of police and couldn’t weigh police testimony as credible.

Another potential juror was dismissed because she is acquainted with a central witness in the state’s case.

Earlier in the day, prosecutor Jerry Blackwell argued that a forensic psychiatrist should be allowed to testify on how Floyd’s behavior, as officers attempted to put him into the squad car, was consistent with any reasonable person’s anxiety or panic during a traumatic event. Officers pointed a gun at Floyd after he allegedly tried to pass a counterfeit $20 bill at a convenience store, and he struggled and told them he had claustrophobia as they tried to force him into the car.

Prosecutors want to show that Floyd might have been unable to comply with the officers’ orders, and wasn’t actually resisting arrest — something Blackwell said he was certain that Chauvin’s attorney Eric Nelson intended to do.

"The defense is doing a full-on trial of George Floyd, who is not on trial, but that is what they’re doing," said Blackwell, adding that the defense also planned to make arguments about Floyd’s drug use.

Nelson said that if the prosecution gets to present that evidence to the jury, the defense should be able to tell the jury about Floyd’s drug arrest in May 2019, when he did not resist getting put into a squad car.

Nelson also has said there are striking similarities between the two encounters that could show a pattern of behavior.

Hennepin County Judge Peter Cahill said he’ll rule on the forensic psychiatrist’s testimony on Friday, when he plans to issue a broader ruling on the admissibility of Floyd’s 2019 arrest and on the defense’s motions for delaying or moving the trial.