After a judge on Wednesday dismissed two jurors who had been seated for the trial of former Minneapolis police officer Derek Chauvin over concerns of the announcement of a $27 million settlement with Floyd’s family, the court picked up two more jurors to serve.

Hennepin County Judge Peter Cahill recalled seven jurors who were seated before the settlement was announced last week, on the request of former officer Derek Chauvin’s attorney, Eric Nelson. Cahill questioned each about what they knew of the settlement and whether it would affect their ability to serve. 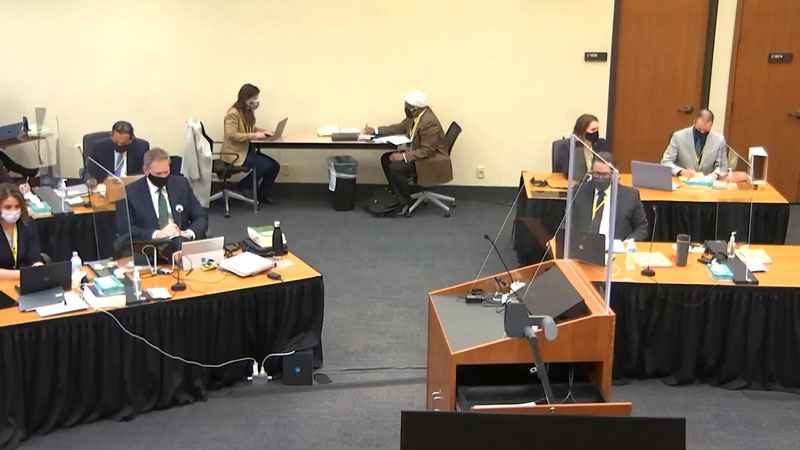 In this image taken from video, participants listen in court as Hennepin County Judge Peter Cahill presides over jury selection, Wednesday, March 17, 2021, in the trial of former Minneapolis police officer Derek Chauvin at the Hennepin County Courthouse in Minneapolis, Minn. Chauvin is charged in the May 25, 2020, death of George Floyd.[Court TV/Pool via AP]

The dismissal of only two jurors suggested the impact of the settlement on the jury pool was less than feared, likely reducing the chance of Cahill granting a defense request to delay the trial. The judge has set March 29 for opening statements if jury selection is finished by then.

Cahill was careful to ask jurors if they had heard about the settlement without giving details, asking if they had been exposed to the "extensive media coverage about developments in a civil suit between the city of Minneapolis and the family of George Floyd."

The first dismissed juror, Juror No. 20, said he heard about the settlement. "I think it will be hard to be impartial," he said.

"That sticker price obviously shocked me," the second dismissed juror said. Juror No. 36 said he thought he could set the news aside, but wasn’t sure, and after a long pause, Cahill dismissed him.

Nine jurors have been seated, including five men and four women. Four are white, two are multiracial and three are Black. Their ages range from 20s to 50s. Fourteen jurors, including two alternates, are needed.

Derek Chauvin trial: Get to know the jurors

The first added on Wednesday, Juror No. 79, said he works in management and has lived in the Twin Cities area for about two decades after immigrating to America. He expressed neutral opinions on several topics, including his view of Chauvin, and said he could start with a presumption of innocence.

He said he trusts police, but when asked if it’s fair for a jury to evaluate the officer’s actions, he said yes.

"I would say it’s another pair of eyes and a new mind just looking at the action," he said.

The man is a father who said he lives in a suburb.

Regarding interactions with police, he says he once had someone break into his house and the suspect was never caught. He doesn’t hold any resentment for the police after the fact.

He answered "somewhat agree" to racial minorities not receiving equal treatment in the criminal justice system. He explained, saying when mistakes are made, "most of them tend to be [concerning] Black people."

Regarding Black Lives Matter and Blue Lives Matter, he says "every life should matter and not be disrespected. We all have family to go back to at the end of the day."

The other juror added, Juror No. 85, is a hockey mom who hasn’t seen much for details involving the case.

She says her job includes "serving clients" and her company is willing to let her serve for awhile. She discussed her work, which is a management consultant position, and how they help companies navigate things like technology and cultural changes. She added that she worked with one company that was about to go out of business, which would have affected "thousands of employees." Regarding if she has consulted a company on diversity and inclusion, she responded no.

She has some concern about when juror’s names would be released at some point. However, she doesn’t have any immediate concerns but said the government center’s set-up was "unnerving." She understands the reasoning behind it.

State vs. Chauvin: Who’s who in the courtroom?

The juror says she would stand her ground when it came to her personal belief on which way she would decide in a jury.

She said she saw clips of the video shown on the news. She did not seek out the entire video. The woman stated on the questionnaire she formed a "somewhat negative" opinion on Chauvin. She formed a "neutral" opinion on Floyd.

She told Nelson she is able to put her opinions to the side if she were to serve on the jury.

"Negative was obviously there… a lot of damage done to businesses and probably homes… the positive things I see that came out of it were really giving people a voice that maybe didn’t feel heard," she said about the unrest that followed Floyd’s death.

The woman says police make her feel safe in her community. She adds that police officers are humans and make some mistakes when asked about her opinion on defunding the police. She adds she doesn’t have a personal experience with police mistreatment of others, but she is aware of incidents relating to that from the media.

"I feel like as humans they can make mistakes as well and if there’s a case in which people feel like anyone was mistreated in any way, I think they should be asked about it," she said. She also stated that "there is always room for improvement" when it comes to the justice system and anything else.

She told the state prosecution team that she would agree that if you don’t cooperate with police, and if something negative happens to you, you have yourself to blame. She is willing to look at a situation where police may be in the wrong with a "level head."

The judge said they will have discussions over one of the state’s experts Thursday and address the change of venue request, continuance and the May 2019 arrest incident involving Floyd on Friday.