A judge said Friday he won’t delay or move the trial of a former Minneapolis police officer charged in George Floyd’s death over concerns that a $27 million settlement for Floyd’s family could taint the jury pool, but he’ll allow limited evidence from a 2019 arrest.

Meanwhile, a 13th juror was seated Friday — a woman who said she has only seen clips of the video of Floyd’s arrest and needs to learn more about what happened beforehand. The jury will include 12 jurors and two alternates, but Judge Peter Cahill said he intends to pick at two more for a total of 15 in case one drops off by the start of the trial.

Jury selection was halfway complete last week when the Minneapolis City Council announced it had unanimously approved the massive payout to settle a civil rights lawsuit over Floyd’s death. Chauvin’s attorney, Eric Nelson, subsequently sought to halt or move the trial, calling the timing of the settlement deeply disturbing and saying it jeopardized Chauvin’s chance for a fair trial. Chauvin is charged with murder and manslaughter.

But Cahill, who has called the timing "unfortunate," said he thought a delay would do nothing to stem the problem of pretrial publicity. As for moving the trial, he said there’s no place in Minnesota that hasn’t been touched by that publicity. 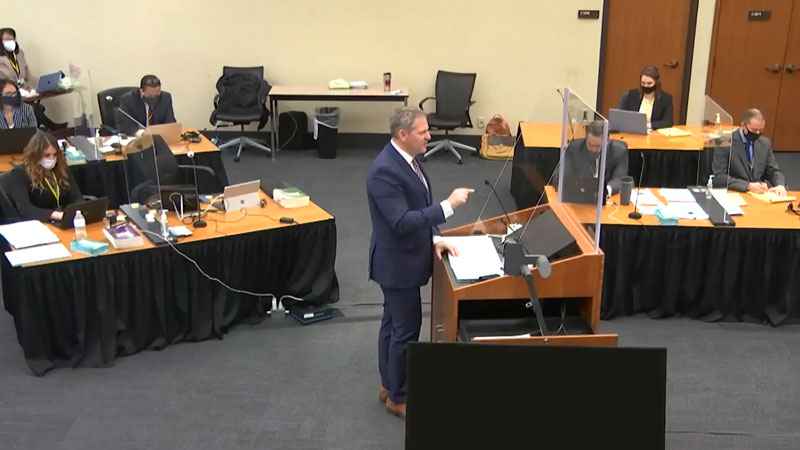 The judge handed the defense a victory by ruling that the jury can hear evidence from Floyd’s 2019 arrest, but only that possibly pertaining to the cause of his death in 2020. He acknowledged there are several similarities between the two encounters, including that Floyd swallowed drugs after police confronted him.

The judge previously said the earlier arrest could not be admitted, but new evidence made him reconsider: Drugs were found in January in a second search of the police SUV that the four officers attempted to put Floyd inside last year. The defense argues that Floyd’s drug use contributed to his death.

Cahill said he would allow medical evidence of Floyd’s physical reactions, such as his dangerously high blood pressure when he was examined by a paramedic in 2019, and a short clip of an officer’s body camera video. He said Floyd’s "emotional behavior," such as calling out to his mother, won’t be admitted.

But Cahill said he doesn’t plan, for now, to allow the testimony of a forensic psychiatrist for the prosecution. Floyd said he had claustrophobia and resisted getting in the squad car before the fatal encounter last year, and the state wanted Dr. Sarah Vinson to testify that his actions were consistent with a normal person experiencing severe stress, as opposed to faking it or resisting arrest.

The judge said he would reconsider allowing her as a rebuttal witness if the defense somehow opens the door, but that allowing her to testify could usher in all of the evidence from Floyd’s 2019 arrest.

"Clearly there is a cause of death issue here, and it is highly contested," Cahill said, noting that both arrests involved Floyd’s cardiac problems and ingesting drugs.

The county medical examiner classified Floyd’s death as a homicide, with an initial summary that said he "had a cardiopulmonary arrest while being restrained by police." Floyd was declared dead at a hospital 2.5 miles away from where he was restrained.

The full report said he died of "cardiopulmonary arrest, complicating law enforcement subdual, restraint, and neck compression." A summary report listed fentanyl intoxication and recent methamphetamine use under "other significant conditions" but not under "cause of death."

The earlier arrest "adds a bit more weight" to the defense’s plan to argue that Floyd put his life in danger by swallowing drugs again and that, combined with his health problems, caused his death, said Ted Sampsell-Jones, a professor at the Mitchell Hamline School of Law.

"Jurors are not supposed to be influenced by that sort of thing, but they are human," Sampsell-Jones said.

Local defense attorney Mike Brandt said it also could hurt prosecutors’ attempts to portray Floyd as a "gentle giant" whose reaction to the 2020 incident was due to the stress of the encounter, and that Chauvin escalated it.

Floyd, who was Black, was declared dead May 25 after Chauvin, who is white, pressed his knee on his neck for about nine minutes while he was handcuffed and pleading that he couldn’t breathe. Floyd’s death, captured on a widely seen bystander video, set off weeks of sometimes violent protests across the country and led to a national reckoning on racial justice.

The 13 jurors seated through Thursday are split by race: seven are white, four are Black and two are multiracial, according to the court.

Legal experts and local defense attorneys said the last two jurors chosen are almost always alternates, and some said they had never seen it done any other way. But the court said that wouldn’t necessarily be the case for Chauvin’s jury. Spokesman Kyle Christopherson said alternates could be chosen "many different ways," but declined to give details.

"You can see in this case why (Cahill) might want to do something different, like draw numbers from a hat," said Ted Sampsell-Jones, adding that the judge needs all jurors to pay attention for the duration of the trial. "If it’s the last two, and that’s published in the press, then the last two might find out that they are alternates. Which is what Cahill needs to avoid."

The woman picked Friday morning — a white woman in her 50s — is between jobs, said she has volunteered with the homeless and wants to work on affordable housing issues.

She said she has never personally seen police officers respond to Black people or minorities with more force than white people and that a person should have nothing to fear from police if they cooperate and comply with commands. She stopped short of saying that means a person deserves to be harmed.

"If you’re not listening to what the commands are, obviously something else needs to happen to resolve the situation," she said of officers’ actions. "I don’t know how far the steps need to go."

Opening statements are March 29 if the jury is complete by then. That process is on track to finish nearly a week early. The judge noted the opening statements would begin on the date mentioned, regardless if the jury-selection process finishes early or not.