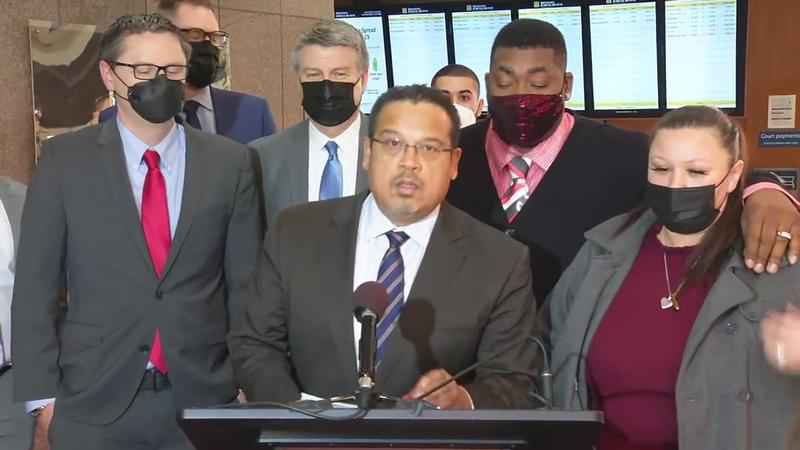 The conviction of Brooklyn Center police officer Kim Potter on charges of first- and second-degree manslaughter Thursday was received with relief, with many calling for continued accountability for police officers’ actions.

Minnesota Attorney General Keith Ellison spoke briefly at the courthouse while flanked by Daunte Wright’s mother and father and their attorney, Jeff Storms.

Ellison spoke to the significance of the verdict but lamented Wright’s death.

"Accountability is not justice. Justice is restoration. Justice would be restoring Daunte to life and making his family whole again," he said. "Justice is beyond the reach that we have in this life for Daunte. But accountability is an important step. And a critical and necessary step on the road to justice for us all."

"My thoughts are also with Ms. Potter today," Ellison said. "She has gone from being an esteemed member of the community and an honored member of a noble profession to being convicted of a serious crime."

Katie Wright, Daunte’s mother, recalled feeling "every single emotion that you could imagine, just running through your body" as Judge Regina Chu read the verdict.

"And now we’ve been able to process it, we want to thank the entire prosecution team, we want to thank community’s support," Katie Wright said. "Everyone that’s been out there that has supported us in this long fight for accountability."

"The family of Daunte Wright is relieved that the justice system has provided some measure of accountability for the senseless death of their son, brother, father and friend. From the unnecessary and overreaching tragic traffic stop to the shooting that took his life, that day will remain a traumatic one for this family and yet another example for America of why we desperately need change in policing, training and protocols. If we are ever going to restore the confidence of Black and marginalized Americans in law enforcement, we need to have accountability and a commitment to listening and to creating meaningful change. We must now turn our attention to ensuring that Kim Potter receives the strongest and most just sentence possible. It is also imperative that we focus on the conduct of Brooklyn Center and pinpoint its systemic failures that contributed to Daunte’s unlawful death."

In a tweet, Minnesota Gov. Tim Walz said, "No verdict can bring Daunte Wright back to his loved ones. Minnesota has to work to do to ensure that a tragedy like this never happens again, and I am committed to continuing that work."

No verdict can bring Daunte Wright back to his loved ones. Minnesota has work to do to ensure that a tragedy like this never happens again, and I am committed to continuing that work.

The Interim Executive Director for the ACLU of Minnesota, Ben Feist also expressed gratitude for the ruling.

"Today, for only the second time in state history, a white police officer has been held accountable for killing a Black man. The jury found former Brooklyn Center police officer Kim Potter guilty on all counts for killing Daunte Wright during a routine and unnecessary traffic stop. We thank the jury for the care and seriousness with which it approached this grueling case.

The DFL People of Color and Indigenous Caucus also responded to the ruling.

"We hope that this is a step in the right direction, bringing police accountability and the safety of Black lives forward as a value that we all share as the people of Minnesota. However, this change comes too slowly, while the pain our neighbors have endured in losing a beloved father, son, and brother to avoidable violence is ever-present. Our thoughts are with the Wright family today, and every day as we continue our work to end police brutality. Today’s verdict is just a step towards accountability for the loss of Daunte Wright. We will continue to fight for a just society where our public safety system values the sanctity of all life."

"Flawed public safety policies put Kim Potter and Daunte Wright into a situation that never should have occurred. Minor violations like air fresheners and expired tabs shouldn’t form the basis for a stop for police officers bearing deadly weapons. Missing a court date doesn’t have to lead to an in-custody arrest."

Potter’s defense team declined to comment. Her sentencing date is set for Feb. 18. According to Minnesota sentencing guidelines, Potter will only be sentenced on the more serious charge of first-degree manslaughter, which typically carries a seven-year sentence. Prosecutors said they will seek a longer sentence.