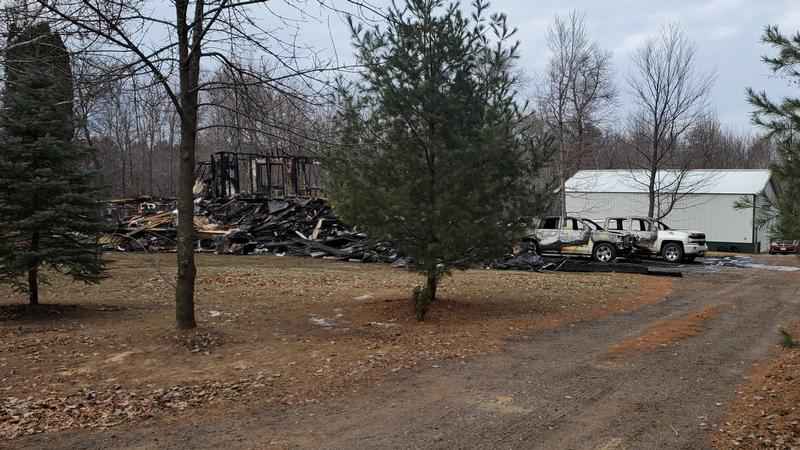 On Thursday evening, a fire decimated the Christensen family’s home in Linwood Township — and they were left with nothing but the clothes on their backs, friends said.

However, due to the power of social media and a tight-knit community, the family hasn’t been left out in the cold.

Carrie Sogge, a close family friend, quickly took to a local Facebook forum to spread the news and ask for help. Sogge organized the gathering of donations such as clothes, food and gift cards as locals expressed their desire to contribute.

The Linwood Country Store & Pizza employees were happy to help when Sogge reached out about making the locale a drop-off site.

“We got the call this morning that the family lost their home and that they lost everything and the neighborhood started rallying around them right away,” Denise Seaver, who works at the country store, said.

Bags of donations soon began to pile up.

“We just have a wonderful community out here that’s very supportive, everybody pays attention to this Facebook community page and we all responded,” Seaver said.

The family of five — with a baby on the way — was displaced by the blaze. Sogge said they all made it out uninjured but lost their beloved family dog in the commotion.

Whiskey, a mastiff, disappeared as the family fled their home. But a nearby neighbor knew who to contact to help get her back.

“I received a phone call from [the Christensen’s] neighbor,” local dog trainer Tessie Glazek said. “She knew that I would have the resources and know where to go to help find the dog.”

Glazek didn’t see the fire but knew something was afoot when traffic became heavy in the neighborhood, which she said was abnormal.

“Then we started kind of looking around, we noticed the lights,” Glazek said.

Glazek, who doesn’t know the Christensens personally, and other volunteers put out flyers and searched the neighborhood for Whiskey.

“My goal was to take the stress of their lost dog off of their mind to be able to be the main contact so that they didn’t have to deal with the floods of phone calls and people asking questions,” she said.

Just minutes after Glazek spoke with 5 EYEWITNESS NEWS, Whiskey was found and reunited with her family.

The Linwood Fire Department, which is a volunteer department, said the blaze was escalated to a 5-alarm fire, with Linwood, East Bethel, Isanti, Stacy and Wyoming fire departments — 40 firefighters, including 17 from Linwood — responding. The house was deemed a complete loss when they arrived at about 4:45 p.m.

The house was completely engulfed and the windy conditions led to embers and a grass fire extending flames onto a nearby home, "so we basically had two fires going at one time," Chief Darryl Ballman said. Firefighters were able to put out the secondary blaze and avoid severe damage to the other home.

Flames were out on the Christensen’s house by 5:30 p.m., but the building had "pancaked," and crews called in an excavator to pull apart the home in order to extinguish hot spots.

The demolition revealed a small miracle.

"We were able to save most of their Christmas presents," Ballman said. They, and a number of family pictures, were tucked into a corner of the basement and mostly unharmed.

Ballman said the fire was especially difficult to fight due to slick road conditions; the county had to come out and salt and sand the roads for trucks to get through. There were also no hydrants in the area, so crews had to water shuttle. Crews left the scene at about 10:30 p.m.

No injuries to any firefighters, family members, or Whiskey were reported, and the cause of the fire is under investigation.

Carrie Sogge organized a GoFundMe for the family to help with expenses and continues to update the community in the Linwood Township Log Facebook group.

Mom Staci, dad Geno, and their 12-year-old son and two daughters, 4 and 14, are feeling the love from the community.

“Our entire family is beyond grateful for the prayers, well wishes, and donations,” the family wrote in a Facebook post. “Our hearts are full!”