The Hartland, Minnesota community started cleanup efforts on Thursday after a tornado ripped through the area Wednesday night.

People expected to be cleaning up snow in the middle of December, but instead, it was tornado debris.

In the face of destruction, the Hartland community remains resilient.

People who live nearby were pitching in from every direction to help the community move forward.

In the heart of Hartland, snapped branches, uprooted trees and debris are what’s left behind after severe weather. 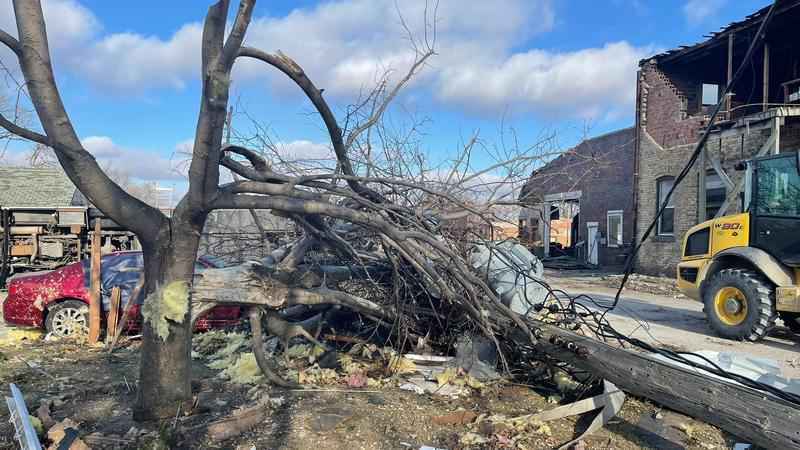 "Everything went dark. The power went out when everything hit the wall,” Henderson said. "I didn’t think it would hit. I could hear it. I was looking for it. You could hear it coming. When I opened the door that’s when it all hit."

High winds ripped through his home shattering windows and knocking his wife to the ground.

A tornado warning was issued for Freeborn County on Wednesday night. Severe weather with wind gusts of 70 miles per hour ripped through the area and the National Weather Service said Thursday that a tornado had caused damage.

Officials said the city of Hartland received the most storm damage in the county. The downtown area was hit the hardest.

"I knew there was damage, but I didn’t expect to the extent of this,” Travis Routh said.

Routh is a business owner in downtown Hartland. The roof of his building was ripped off in the storm.

"It’s kind of a bummer. We have a damaged building that we have to use every day,” Routh said.

But he has help to pick up the pieces.

"It’s a lot, but It’s a small community. Everyone helps each other,” Drew Harguth, volunteer, said.

For hours, people banded together cleaning up debris and boarding up buildings.

Volunteers said the community puts the heart in Hartland.

“Helping each other. You have to do what you have to do because any one of these people would have done the same for you if it happened to you,” Harguth said.

Freeborn County Highway Department will help clear large debris from the roads on Friday, the county sheriff said. Crews are working to get the electricity back on for residents, who are still In the dark.

Xcel Energy officials said some people will have power restored Thursday night, but others may be without until Friday because of the extensive damage.