There were calls for a Columbia Heights City Council member to resign during a special council meeting on Wednesday. An independent investigation found Councilmember KT Jacobs violated the Council’s code of conduct when she lied about an offensive phone call a candidate received.

City Council candidate Justice Spriggs announced he was running in April. The 26-year-old shares his family’s history on his campaign website, including that his grandfather is a World War II D-Day veteran and one of the first African-Americans to graduate with a PhD from the University of Minnesota.

“In our city’s 102 year history, we’ve only elected one person of color and that was our mayor,” said Spriggs. “As someone who is a person of color and biracial, I use that in my campaign as a point to where I want to bring this diverse voices to the table who have not been at the table before.”

In July, he said he received a request from a potential future constituent who was hoping to talk on the phone about the focus of his campaign.

“I think initially I had a feeling something was up when the name that had been on the form on my website that was filled out when they wanted to talk to me didn’t match up to the caller I.D.,” said Spriggs, who said it identified Councilmember KT Jacobs as the caller. 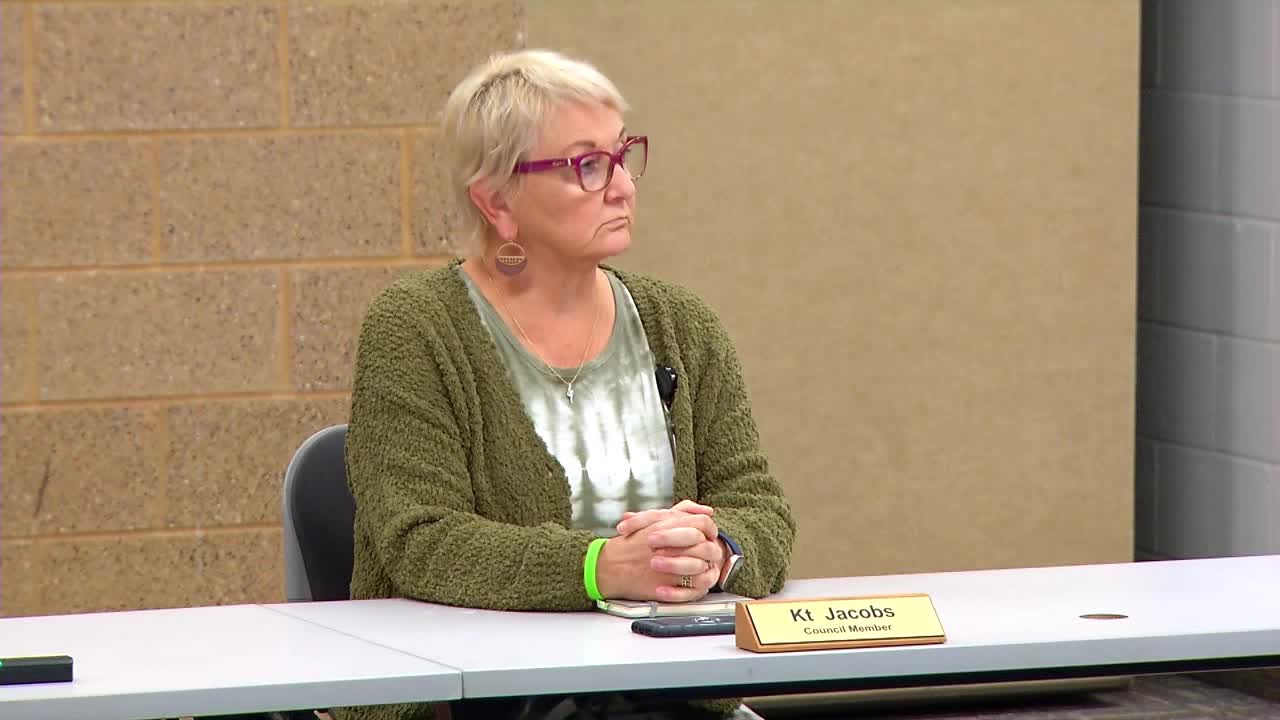 A Columbia Heights city council member was censured for a phone call that was made to a city council candidate (KSTP).

He found the ensuing conversation so concerning that he reported it to the city, which brought in an outside firm to investigate the call.

A report from Red Cedar Consulting, which was presented at the City Council’s Wednesday meeting, details the call.

The report says on the morning of July 24 “Based on Justice and Dan Spriggs’ unrefuted descriptions of the call, the caller asked Justice Spriggs questions about his policy positions and questioned whether Justice Spriggs was old enough and had enough experience to be on the City Council.”

It goes on to say, “The caller then asked Justice Spriggs if he was “really biracial” and whether he had been raised in a white or black household. Justice Spriggs explained his heritage, including that his grandfather on his father’s side had been black. The caller commented that “that’s not how that works”.”

Jacobs denied making the phone call, according to the investigation.

In a Facebook post on July 27, she claimed the call was made by a family member. Jacobs also said “The behavior of my family member is unacceptable. I’m deeply sorry that the incident took place.” She told her Facebook followers that she contacted Spriggs to apologize.

Red Cedar Consulting, however, found discrepancies in her story.

The report said, “Both prior to and during this investigation, KT Jacobs has repeatedly maintained that she did not make the July 24, 2022 phone call to Justice Spriggs. As discussed in detail above, based on a full consideration of the evidence in the record, it is more likely than not that KT Jacobs’ assertions regarding the July 24 phone call have been untruthful. This Investigator finds that by making these repeated untruthful statements — and in addition to her conduct during the phone call itself — KT Jacobs has failed to conduct herself ethically and in accordance with the City Council Code of Conduct.”

Investigators determined she likely made the call.

“It’s so disappointing to see it and the hurt it has caused our community, not to mention Justice Spriggs,” said Mayor Amáda Márquez Simula. “I would like to formally recommend that we censure and remove Councilmember Jacobs from any appointments that we’re able to and I would also like to request Councilmember Jacobs to step down from office.”

Councilmember Connie Buesgens added, “I will be asking even though we don’t have the power, I think the Council has the right to make a motion to request that KT Jacobs resigns […] based on her outrageous racist behavior and lying to the residents of this community and the council, to me, is abhorrent.”

Jacobs did not speak during the meeting and left as soon as it ended. She did not respond to 5 EYEWITNESS NEWS’ request for comment.

The council is expected to take action on the Mayor’s recommendations at an October meeting.

“I really appreciated their words of condemning what happened and strongly coming out against it,” said Spriggs.

He told us he was taken aback when he received the call back in July.

Spriggs, who is a medical student, said “With my background in science, genetics, medicine, all of that. explaining my family heritage and lineage and to get push back and say that’s not how it works was invalidating to my family, especially as my grandfather did experience a lot of racism growing up and had a lot of challenges.”

He told 5 EYEWITNESS NEWS he hopes Jacobs reflects on this incident and that it sets an example for how the city moves forward.

“There have been a lot of people of color in our community and a lot of diverse verses that we’ve wanted to bring to the table in terms of our different boards and commissions and city councils but they haven’t felt welcome to run because of the tone or atmosphere they’ve experienced in Columbia Heights,” said Spriggs. “Something I want to bring out is that this this incident happened in our community but it’s not who we are as a community. We’re a diverse city, we’re one of the most diverse cities in the state and really welcome that and I think it makes us stronger.”