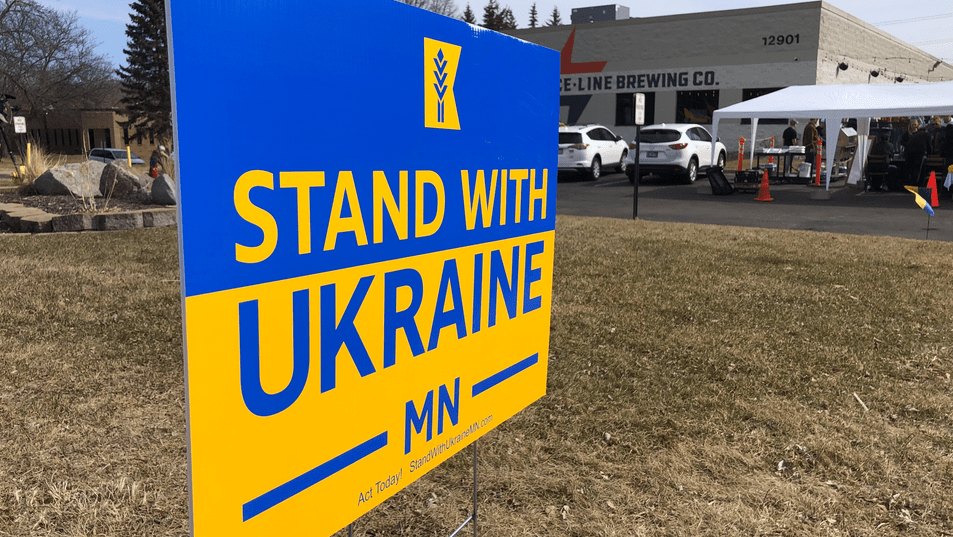 Cold beer, hot food—and a show of support for Ukraine.

Ukraine, now the focus of much of the world, has endured six weeks of destruction and bloodshed.

“The genocides and atrocities that the Russian troops are doing to the Ukrainian citizens, they’re not attacking the army, they’re attacking civilians,” Jablonsky said. “They don’t seem to want to engage the Ukrainian army, instead, they’re taking the easy way out.”

But Naumann wanted to do more than display signs.

“Basically one day I was watching the news and saw what was happening in Ukraine,” he recalled. “It wasn’t the first time I had seen something but it just hit me, we could do something.”

So joining forces with the Ukrainian American Community Center—and Kramarczyk’s deli—Naumann and his staff organized a Ukrainian festival of sorts, with a purpose.

There was traditional music, beer, of course, and pierogis, but also something else on the menu: awareness.

With the hope that more people would understand what’s going on in Ukraine and help out.

For every beer poured, $1 was to go toward the center’s humanitarian aid efforts.

Proceeds from food sales were being donated as well.

For Maria Doan, this fundraiser is personal.

Her brother Mykola, his wife Nadia, and their three kids, live in Chernivtsi, Ukraine, along the Romanian border.

She said for right now, they are OK, but are well prepared to evacuate.

“They still have air raid sirens but no major bombing or shelling just yet,” Doan said. “A car is fully loaded and they’re ready to do at any point, and they’ve been in that state since early February.”

Jablonsky says since the Russian invasion, the center has raised $250,000 in humanitarian aid.

“When you have family members in-country in the cities that need help and their friends are calling they grew up with, ‘What can you get us with medical supplies?,’ You take action,” he explained. “In fact, we have two people right now that hand-carried trauma team medical supplies like tourniquets, compression bandages, and so forth to specific areas that need it.”

Doan says the Ukrainian community is grateful for the support from Minnesotans, but says more help is needed.

“I definitely feel the support and solidarity of Minnesotans. A lot of people have reached out and are personally asking how can I help,” she said. “Hopefully the world is waking up and hopefully western leaders are going to do more to provide more weapons and anti-aircraft installations, so that Ukrainians can protect themselves.”

Jablonsky said efforts like this are making a difference.

You can find out more about the Ukrainian American Community Center here.