The ceiling above Jaime Steffenson’s bed was cracked and sagging. Burn marks on an electrical socket had her afraid to plug anything into it.

Ron Miller says conditions in his makeshift bedroom in the basement of the same house in Minneapolis were even worse. A lawsuit he filed against the owner this year documented blocked windows, standing water and raw sewage.

The final straw — a fire in December last year while Miller was sleeping.

“Luckily I woke up and I saw the fire actually starting,” Miller said. “If I didn’t catch it, the fire probably would have went up the wall.”

The city of Minneapolis is aware of the issues at the house on Erie Street near the University of Minnesota campus. Inspectors have issued hundreds of code violations, thousands of dollars in fines, and revoked the owner’s rental license more than a decade ago. 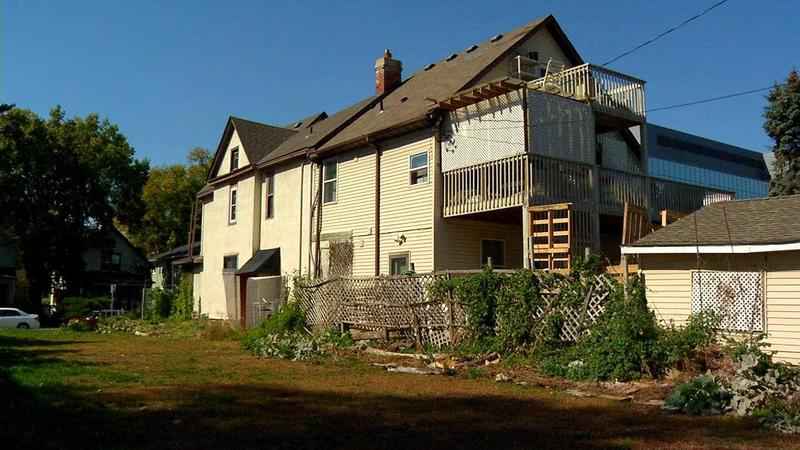 But a review of public records shows the city did not file criminal charges against Mohammed Shahidullah until after 5 INVESTIGATES started asking questions last month.

Until that point, the city allowed Shahidullah to keep renting out rooms and bringing in new tenants who complained of substandard and unsafe living conditions, according to city and court records.

“A whole lot of promises”

When Steffenson moved into a bedroom on the second floor of the house in June, she said she had just landed a new job and was looking for something affordable nearby.

She agreed to pay Shahidullah $475 a month.

“It sounded like a good deal at the time,” Steffenson said. “He made a whole lot of promises.”

She says red flags quickly arose when her new landlord asked for more money and failed to make basic repairs she had requested.

When she complained to the city, Steffenson says she was surprised to learn Shahidullah had lost his rental license in 2009 and still doesn’t have one.

“He is actively doing something illegal,” Steffenson said.

Despite repeated requests in person, by phone, and email, 5 INVESTIGATES has been unable to interview Shahidullah about the allegations.

Not a “primary enforcement tool”

Shahidullah may have been able to continue operating without facing criminal consequences because the city rarely pursues charges against homeowners and landlords cited for housing violations.

Only a dozen cases have resulted in convictions for violations of the Minneapolis housing code since 2017, according to data obtained from the Minnesota Court Information Office.

When 5 INVESTIGATES first contacted the Minneapolis City Attorney’s Office in September to ask why Shahidullah had not been charged criminally, a spokesperson wrote that “filing a criminal case is not a primary enforcement tool” when dealing with rental property owners.

“Administrative enforcement provides for faster enforcement of the code violations,” wrote media relations coordinator Sarah McKenzie in an email. “Additionally there was a reluctance to charge people criminally for housing code violations where homeowners would then have the burden of having a criminal record.”

As violations at Shahidullah’s property mounted in 2013, the city agreed to a settlement in which it wiped away more than $10,000 in fines in exchange for Shahidullah’s promise to stop renting rooms without a license and to operate the house “exclusively as a bona-fide single family, owner occupied home.”

When confronted with breaking that promise earlier this year, civil court records show Shahidullah testified to a judge that he “did not remember when he signed the settlement agreement with the City.”

The city still had not charged Shahidullah even after an inspector testified earlier this year that the basement bedroom occupied by tenant Ron Miller was “not a legal sleeping room.”

Miller sued Shahidullah after a fire in that same bedroom in December 2020. Inspectors documented “illegal and hazardous electric wiring” as well as a lack of adequate heat.

“It was illegal all the way through,” Miller said. “If it happened to me it can happen to someone else.”

Miller won a judgment of more than $7,000 but says he still has not been paid.

“You can’t operate a restaurant if you don’t have a license because people can get sick and people can die. And the same is true for landlord properties,” Grundman said.

He applauds the work of the individual inspector who documented the problems at the house but says the city could have been doing more.

“It is a criminal violation to rent without a license,” Grundman said. “And if there were ever a case where those sanctions should apply, to me, this seems like absolutely the case.”

The Minneapolis City Attorney’s Office declined repeated interview requests, but two days after 5 INVESTIGATES began asking questions about the property, the city filed a criminal complaint charging Shahidullah with renting without a license — a misdemeanor punishable by up to 90 days in jail and a $1,000 fine.

On Tuesday, the city returned to Shahidullah’s house with police to try to enforce its latest order to vacate but ultimately allowed one tenant to temporarily remain at the property because he had recently moved in.

“City staff will be working with him to connect him to other housing and legal support services,” a city spokesperson said.

In emails to 5 INVESTIGATES, Shahidullah said he was “willing to participate” in an interview, but he has yet to agree to a date or time to share what he called “very important facts.”

He wrote that he “obtained about 20 permits for various improvements,” resolved issues of “hazardous wiring,” and blamed the city for problems with sewage in his basement.

Jaime Steffenson says she worries Shahidullah will not stop seeking new tenants to replace her and others who have finally left.

“I hope the city continues to move forward,” she said. “He’s not going to stop. It’s going to take an act from the city to enforce it.”