Admired by teammates and fans alike for her fierce determination, Carli Lloyd played her last game for the United States on Tuesday night as the team beat Korea Republic 6-0 at Allianz Field in St. Paul.

Lloyd, who memorably scored three goals in the opening 16 minutes of the U.S. victory in the 2015 Women’s World Cup final, is retiring from soccer after a decorated career that includes two World Cup titles and a pair of Olympic gold medals.

She ranks second in the world for most international appearances ever after having played in 315 career games. She has scored 134 goals with the U.S., third-most in the history of the women’s team.

With her family in the stands, Lloyd subbed out of the game in the 65th minute to a standing ovation and hugs from her teammates.

“It’s been emotional. But there’s just a sense of peace and contentment that I feel — it’s just joy and happiness,” Lloyd said. “It’s been an amazing journey and I gave it all I had, and now I can walk away into the next chapter.” 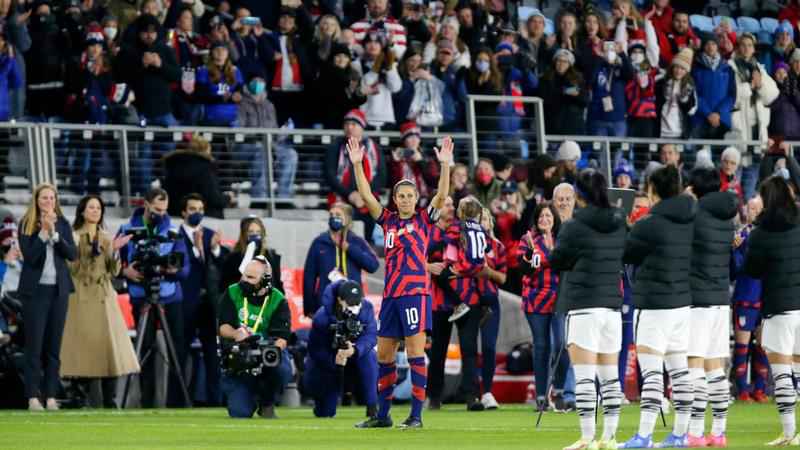 “Somebody said that Carli is the U.S. women’s national team. She’s brave. She’s relentless. She’s determined, intense and just doesn’t take no for an answer,” U.S. coach Vlatko Andonovski said. “She just pushes through and finds a way. So I think that she’s a great representative of what this team is all about.”

“I’m excited to see the future of this team. I’m saying goodbye on the field, but I want to continue to help in any way possible,” Lloyd added. “I’m going to be the biggest fan, biggest cheerleader, and I want to see this team continue to succeed.”

“Carli’s my favorite player so that’s why we literally just booked this last minute last week, I’m like ‘We’re going, we gotta go’, “ said Nicole Poole, who traveled from Seattle to see the game.

Other fans made the trip from across the country.

“We would never in a million years miss out on this match,” said Brittany Scally, from St. Louis. “There’s never been a player like her, I don’t think there will be again.”

Wearing a Carli Lloyd shirt, Scally was joined by her friends from St. Louis, Chicago and Denver. Soccer has been at the foundation of their friendship.

“We grew up watching Mia [Hamm], and Brandi [Chastain] and Michelle Akers,” she said. “And throughout the years, this team has give us a lot more incredible world class athletes, role models, just women to grow up and watch. They’re the gift that keeps on giving"

Meredith Karnes celebrated her 10th birthday cheering on Number 10 from the front row.

She and her older sister made signs to support their favorite player, which spelled out C-A-R-L-I.

“She’s Courageous for doing this how long she is and how old she is, and then she’s very Athletic – more athletic than me and I’m younger than her,” explained Allison Karnes. “She is Relentless, she never stops, she’s out-running 18 year olds .She’s Legendary, she’ll go down in history, that’s why posters are everywhere and she’s Inspiring because she inspired her and me and a bunch of other kids all over the country.”

Kendra Karnes said they are celebrating Lloyd’s achievements. She’s been a powerful role model for her daughters.

“Just the amount of work she’s had to put in to be still be playing at her level, at this age, is incredible,” said Karnes. “It’s really cool that they have a team that they can look up to and that they can come and watch. We flew from Oklahoma but that seems like a pretty small trip to see the amount of star athletes that are on one single team.”

Allison Karnes added, “They’re really hard working and they deserve everything they’re getting, the pride that they’ve earned and the hard work that Carli Loyd has put into this team, and all the other players."

This was the National Team’s second visit to Minnesota in just two years. Their last match at Allianz Field was in 2019, after the World Cup win.

“We are ready for more soccer and specifically more women’s soccer,” said Andrea Yoch, the president and co-founder of the new women’s soccer team in the Twin Cities.

She credits the U.S. Women’s National Team with building the energy needed to create the new pre-professional team, which has yet to be named. There is a vote underway to pick the name. Play is set to begin in May 2022.

‘If it wasn’t for Megan Rapinoe and Crystal Dunn and Jessica McDonald and Carli Lloyd and there’s just so many of them, women’s soccer wouldn’t even be a household name,” said Yoch. “The fact that they have outperformed the men, they have brought home these trophies for the United States that we all want, allows us to almost jump on their backs and say okay let’s just do this everywhere.”