Elliott said he was pushing for accountability for the death of 20-year-old Daunte Wright since Potter killed him.

The mayor was joined by activists in the community at a Thursday afternoon press conference in Brooklyn Center City Hall.

Elliott said this verdict is an important moment for accountability, but that no verdict can deliver true justice for Daunte Wright because he’s not alive today. 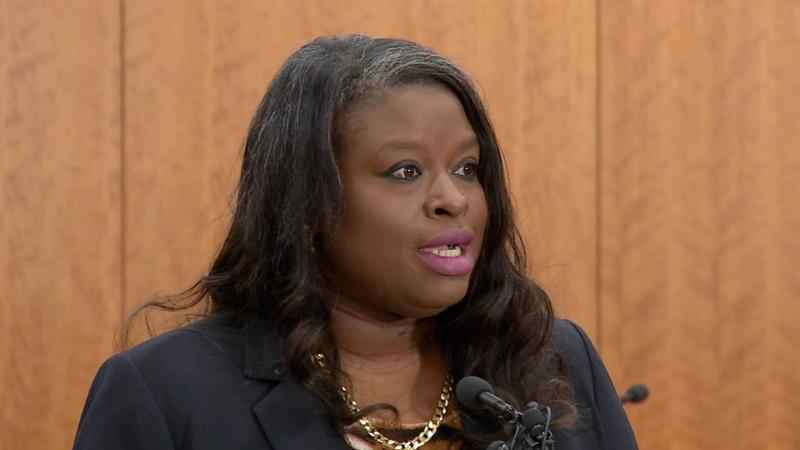 Nekima Levy Armstrong speaking after the verdict in the Potter trial was read.[KSTP-TV]

"Our community continues to grieve alongside Daunte’s family and alongside all families with lost loved ones to police violence," Elliot said. "After this tragedy, we must all fully commit ourselves to creating a city where everyone can thrive and everyone is safe from police violence."

Community activists also reacted to the verdict, calling it a step in the right direction — but a small victory.

"We are grateful for the decision of those members of the jury who looked past all of the shenanigans in the courtroom, who looked past folks who were trying to blame Daunte Wright for his own death, and who at the end of the day saw Daunte’s humanity and reached a just verdict by holding Kim Potter accountable under the law, which is exactly what should have happened," Nekima Levy Armstrong, community activist and attorney, said.

Levy Armstrong said racial profiling in the Twin Cities has been a major problem for decades. She said lawmakers need to come up with policies to solve the ongoing issue.

"We hope that this is a call to action, and we hope that members of law enforcement will think twice before they pull someone over for an air freshener or for expired tabs or based on a so-called hunch," Levy Armstrong said. "We deserve to be able to drive through the Twin Cities just as a white resident would."

The mayor mentioned a community safety and violence prevention resolution that was passed in Brooklyn Center earlier this year that he said could be a product of real change.

"Fully implementing this transformative resolution will prevent more deaths at the hands of law enforcement and create a community where everyone has the resources and is supported in a way necessary to thrive," Elliott said. "It’s the best way to honor and to begin delivering justice for Daunte Wright and his family."

Elliott said he’s calling on the governor and state legislature to direct more state funding to Brooklyn Center to fund initiatives to make plans a reality.