Protests erupted Sunday in Brooklyn Center after a police officer shot and killed a man during a traffic stop. Mayor Mike Elliott issued a curfew until 6 a.m. Monday morning for anyone in the city, with exceptions for those traveling for work or emergency situations.

Members of the community first started gathering throughout the afternoon near the scene where Daunte Wright was pronounced dead at 63rd Avenue North and Lee Avenue.

What started as a couple dozen protesters grew to more than a hundred. People waved Black Lives Matter flags, blasted music and chanted at the police. As the crowd grew, police reinforcements in tactical gear started showing up to secure the area.

At one point, people started jumping on a squad car at the scene, and some were seen throwing concrete blocks. Police in riot gear then began advancing toward the crowd to maintain order. Katie Wright, the mother of the victim got on a speaker and asked people to calm down.

This was taken at 7:15
Police SUVs were getting damaged – one was throwing a concrete block to smash windows, others were stomping the roof.

Police moved in to try and keep order.

The mother of the shooting victim got on speaker asking everyone to stop the violence. pic.twitter.com/RAbMxaSSel

After marshals formed a line at the front of the demonstration, police eventually backed away from the protesters, got in their vehicles and drove away, according to social media reports from the scene.

Around nightfall, protesters regrouped at 63rd and Lee. Activists were giving speeches and led the crowd in song and chants as they gathered around a makeshift memorial of chalk art and candles. 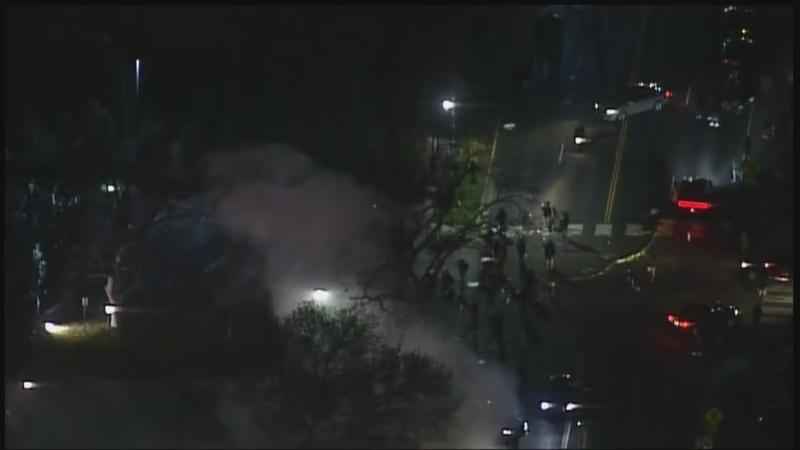 A cloud of gas from police munitions hangs in the air Sunday, April 11, 2021, outside the Brooklyn Center Police Department after officers told protesters to disperse.[Chopper 5]

Around 9 p.m., the crowd of protesters began making their way toward the Brooklyn Center Police Department headquarters. Aerial footage appeared to show police forming a perimeter around the building.

Just after 9:30 p.m., officers declared the demonstration outside the police station an unlawful assembly and gave them a 10-minute warning to clear out. About 25 minutes later, officers started firing less-lethal rounds and flash-bang grenades to disperse protesters remaining in the area.

The crowd moved across the street from the police station and continued chanting. Social media reports show officers periodically launching flash-bangs and less-lethal rounds at protesters who approach the line of police.

Around 10:15 Metro Transit said it was shutting down public transit in Brooklyn Center at the request of law enforcement.