The Brooklyn Center City Council is expected to vote on a resolution Saturday that aims to reshape public safety in the city.

The special meeting comes one month after Daunte Wright was shot and killed during a traffic stop. Former Brooklyn Center police officer Kim Potter is charged with second-degree manslaughter in Wright’s death.

The proposal before the City Council was crafted by Brooklyn Center Mayor Mike Elliott.

"Our community has made it very clear: Enough is enough. It’s time for real change," Elliott told 5 EYEWITNESS NEWS on Friday. "We think this is a common-sense approach to public safety that’s going to expand our toolbox so police are not the only available response to emergencies." 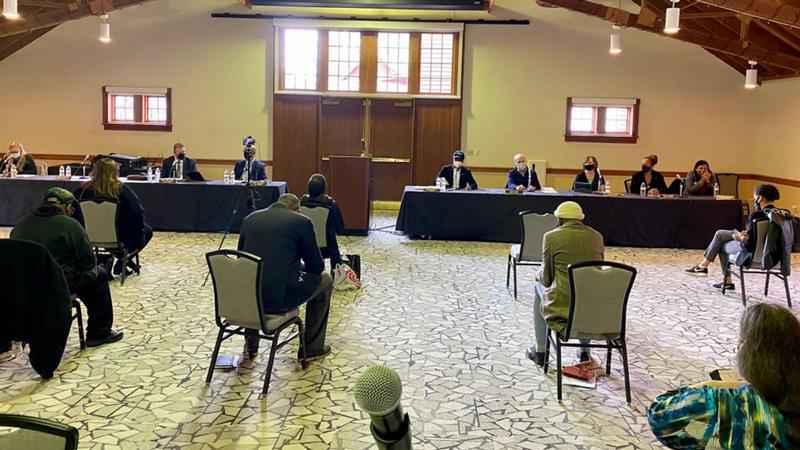 The resolution would make several significant changes to the city’s policing model, which would include:

Elliott said a similar model, relying on mental health teams, is in use right now in Eugene, Oregon.

"They get I think somewhere around 27,000 calls per year. They call for police backup only about 1% of those calls and they’ve had zero deaths," Elliott said. "So it’s shown to be incredibly safe, incredibly successful."

But law enforcement groups are voicing concerns over the proposal.

"This is a recipe for disaster how this resolution is written," said Jim Mortenson, executive director of Law Enforcement Labor Services, the labor union for Brooklyn Center Police Department.

Mortenson said some of the current proposals are not legal under Minnesota law.

"To put unarmed citizens out there making traffic stops, that just can’t happen," Mortenson said. "It’s against the law. There’s a state statute that says you have to be a licensed peace officer to stop a car, so for them to come out in that resolution and go do a vote on that, it’s just inappropriate."

The Brooklyn Center city attorney provided a statement to 5 EYEWITNESS NEWS Friday, which said, in part:

"There are clearly a range of legal issues that will need to be considered as part of developing the recommendations. It will be valuable for the Implementation Committee to hear a variety of voices to help identify and address, to the extent possible, the legal and practical issues as part of developing its recommendations. Once recommendations are made, my office (together with the prosecutor’s office) will need to review them to identify if there are any legal concerns that need to be brought to the Council’s attention. Input from law enforcement and the other stakeholders will be extremely valuable to the Implementation Committee as well as to help inform the legal review of its recommendations."

"On mental health calls, those are a complete unknown. You don’t know what’s going on, the level of violence, whether they’re armed or not armed," Mortenson said. "If we lived in a society where there was no evil or crimes being committed, maybe that would work. The reality of it is that’s not how society is."

Mortenson said they support having extra resources, such as social workers, when it comes to mental health or substance abuse calls. But he believes the proposed changes put the public at risk.

"Violent crime rates in the metro are through the roof right now," Mortenson said. "We are traveling down a path of lawlessness and there are so many holes in their plan."

He wants the mayor and City Council to include law enforcement groups in the conversation surrounding changes to policing.

"This is not the way to do it. There’s been little to no conversation," Mortenson said. "Whenever you rush significant change, you have the potential of having a significant failure."

Elliott said this is simply the first step in a multi-year process to transform public safety. He said he plans to get input from all stakeholders, including law enforcement partners and the community.

"This is a result of listening to our community and it’s a first step towards taking action. We have the ability to start making the change now, and with this resolution, we’re doing just that," Elliott said.

Saturday’s special City Council meeting is set for 3 p.m. The meeting is open to the public.

The mayor expects City Council will vote on the resolution Saturday.