The Brooklyn Center City Council held a special meeting Saturday to consider a proposed top-to-bottom overhaul of the city’s approach to policing and public safety.

The resolution is named after Daunte Wright and Kobe Dimock-Heisler and proposes a number of organizational and policy changes to Brooklyn Center’s public safety apparatus, including the introduction of an unarmed traffic enforcement division and rerouting some emergency calls to trained medical and mental health professionals instead of the police.

Mayor Mike Elliott stressed that the resolution isn’t setting anything in stone, but it gives the city a process for moving forward on much-needed reforms.

"This work is going to take a year or more to actually implement," Elliott said. "Statistically, if we don’t get to work right now, we’re going to have another killing before this all gets implemented."

The council heard testimony from policing experts, family of Wright and Dimock-Heisler, community activists and local residents, who all weighed in on the prospective public safety model. 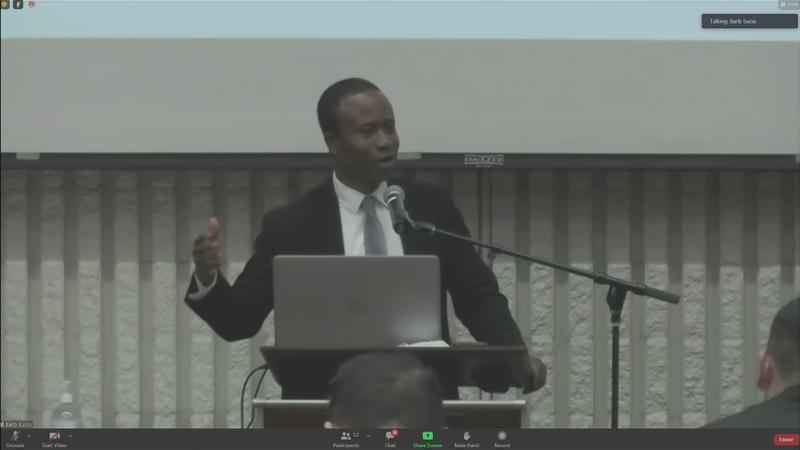 Brooklyn Center Mayor Mike Elliott speaks during a special meeting of the City Council on Saturday, May 8, 2021.[KSTP]

"When people in the community are asking for our help, what we are supposed to do is give them help," said Amity Dimock-Heisler, whose son Kobe was shot and killed by Brooklyn Center police in 2019. "We are all one community. We are not to go in there, terrorize them, and then murder them in their own home in front of their grandmother."

Traffic stops, in particular, have come under new scrutiny in the past month after Brooklyn Center police shot and killed 20-year-old Wright after he got back into his car during a traffic stop that turned into an arrest for an outstanding warrant. Police say they tried to pull him over for having expired license plate tabs.

Under the City Council’s resolution, all non-moving traffic violations would be handled by an unarmed Traffic Enforcement Department, and the city would look to pare down the traffic infractions that armed police officers can enforce.

All calls pertaining to medical, mental health, disability-related or behavior or social needs would be handled by a Community Response Department consisting of medical and mental health professionals, social workers and other volunteers. The resolution states only a small portion of all 911 calls for service were related to a concern about a crime and that a more targeted response that leaves out armed police officers would help avoid ineffective or deadly outcomes.

Dimock-Heisler, the resolution’s other namesake, was a 21-year-old man with autism who was shot and killed while Brooklyn Center police were responding to a domestic disturbance in September 2019. Dimock-Heisler suffered from a severe psychiatric disorder, and he had a hearing six months before his death to determine whether his mental illness warranted a prolonged hospital commitment.

Part of the resolution calls for the creation of the Department of Community Safety and Violence Prevention, an umbrella department for police and firefighters and the new divisions for traffic enforcement and community response.

The resolution also proposes the creation of a committee composed of people who have direct experience with being arrested, detained or having other encounters with Brooklyn Center police that would make suggestions regarding police response and would review draft collective bargaining agreements between the police department and the city.

Another committee appointed by the mayor composed of local, state and national experts on public health-oriented approaches to community safety would draft amendments, ordinances, resolutions, policies, guidelines and other formal recommendations for the council to vote on.

The City Council will also address changes to how police use force during encounters. The resolution would put an emphasis on de-escalation and cutting out the use of force in certain situations, such as firing at a moving vehicle or using force during protests and assemblies.

Saturday’s meeting did not end with a vote; after two and a half hours, Elliott decided to continue the discussion to next Saturday so council members have more time to look over the resolution.