The Brooklyn Center City Council has passed a resolution that would reshape the city’s approach to policing.

Council members passed the resolution by a 4-1 vote during a special meeting Saturday. The measure does not make any sweeping changes right away; rather, it gives city leaders a roadmap for overhauling its public safety departments.

The proposal is named after Daunte Wright and Kobe Dimock-Heisler, two Black men who were shot and killed during encounters with Brooklyn Center police officers. Wright’s death during a traffic stop last month precipitated conversation on police reform locally and statewide.

“Brooklyn Center did not look to be in the national spotlight on these issues, but here we are,” Mayor Mike Elliott said. “And given the tragic incidents that occurred here, including those taking the lives of Daunte Wright and Kobe Dimock-Heisler, we must respond with a commitment to do better, and today’s vote is part of that response.”

The proposal calls for the establishment of an implementation committee comprised of experts on public health-oriented approaches to community safety that would draft specific changes for the city council to vote on, as well as an oversight committee of people who have dealt directly with the Brooklyn Center Police Department. 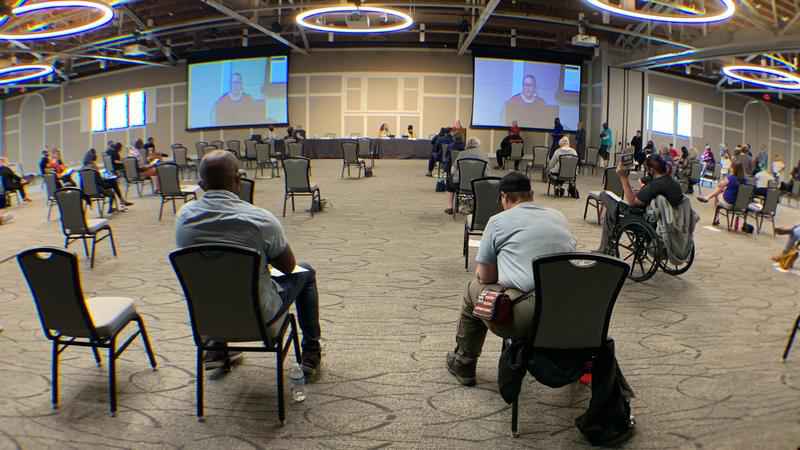 Members of the community gather Saturday, May 15, 2021, at the Earle Brown Heritage Center in Brooklyn Center for a special meeting of the City Council.[Michael Soe/KSTP]

Specific measures proposed in the resolution include the formation of an unarmed traffic enforcement division, an unarmed community response team that would assist with mental health and medical crises the implementation of a "citation and summons" policy that would prohibit officers from making arrests or searching vehicles for non-moving traffic violations.

Katie Wright, Daunte Wright’s mother, said her son would still be alive if these measures were in place on April 11.

"I don’t wish this on anybody in the room, and in order for this to not happen, we need this resolution," she said.

Jaylani Hussein, executive director of CAIR-MN, said the proposals in the council’s resolution could go far in preventing the types of police encounters that are most likely to go sour.

“It’s about saving lives and protecting the most vulnerable in our community, individuals who are dealing with mental health crises and their families and those who are poor in this city, work hard every day, and pulled over by police for no reasons.”

Some law enforcement groups, however, had pushed the City Council to reject the resolution.

Jim Mortensen, executive director of Law Enforcement Labor Services, the union representing Brooklyn Center police officers, says it would be dangerous for civilians to take on some policing duties.

He thinks some departments are turning toward partnerships with cops on patrol and mental health workers.

“I’m not saying we couldn’t have a co-partnership on that — in fact, many departments are heading in that direction," Mortensen said. "We think that’s a good idea.

"But for just a social worker to drive over to a house on a mental health call — they’re going to run into a complete unknown, and even in today’s world, whether it’s at some fire scenes, ambulance calls, they all wait for law enforcement to secure the scene before they come in.”