Flames tore through a Dodge Neon, trapping two western Wisconsin teens after a head-on collision Monday afternoon at the crest of a hill near Hay River Township in Dunn County.

The 18-year-old male driver had been rescued as well from the wreckage.

"There was so much smoke and flames in that vehicle we couldn’t really see inside," Deputy Gates said.

Sgt. Rud broke the windows to get into the burning car while both officers used their fire extinguishers to knock down the flames. 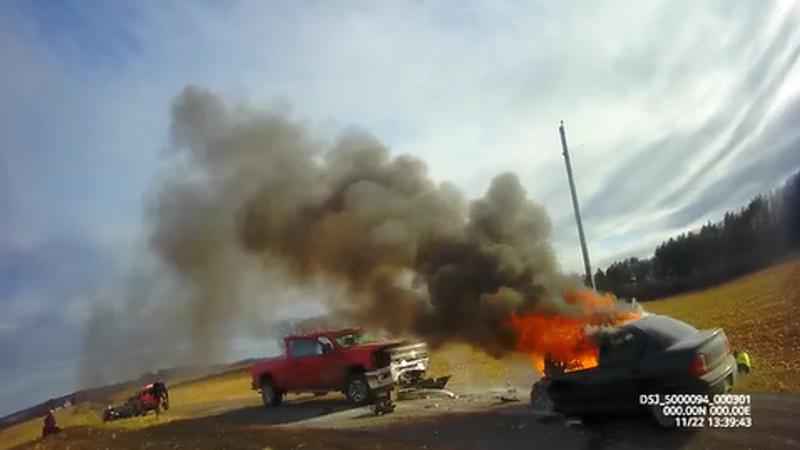 A nurse and nurse anesthetist were passing by and helped attend to the victims before medics arrived.

The two teens were taken by air ambulances to the hospital, where they remained, according to the Dunn County Sheriff’s Office.

"I’m thankful both of the kids are alive — at least they have a long way to go — but hoping everything works out for them," Lamkin said.

“You go into law enforcement to help people," Gates said. "This is just one of those incidents. It makes you feel good going home."

Lamkin plans to name Rud for an award. It will be Rud’s second life-saving award in the last year. The police chief suggested to the Dunn County Sheriff’s Office that Gates should be honored as well.

The woman driving the other vehicle was taken to the hospital with non-life-threatening injuries.

The cause of the crash remains under investigation.