Over 700 crashes, spinouts in under 24 hours as bitter cold, strong winds impact state

UPDATE 4:45 p.m. – After plenty of snow fell across the state Wednesday, it’s the cold and wind that are the issue Thursday.

Tofte ended up with the most snow in Minnesota, getting an even foot, followed closely by its neighbor just north, Lutsen, at 11.7 inches. Totals closer to the metro include:

However, Thursday’s frigid temperatures and strong winds are creating dangerous travel conditions, including blizzard-like conditions in some areas.

At Minneapolis-St. Paul International Airport, at least 80 flights had been canceled and another 66 delayed, as of 4:30 p.m. Flight delays and cancellations at MSP can be found here. 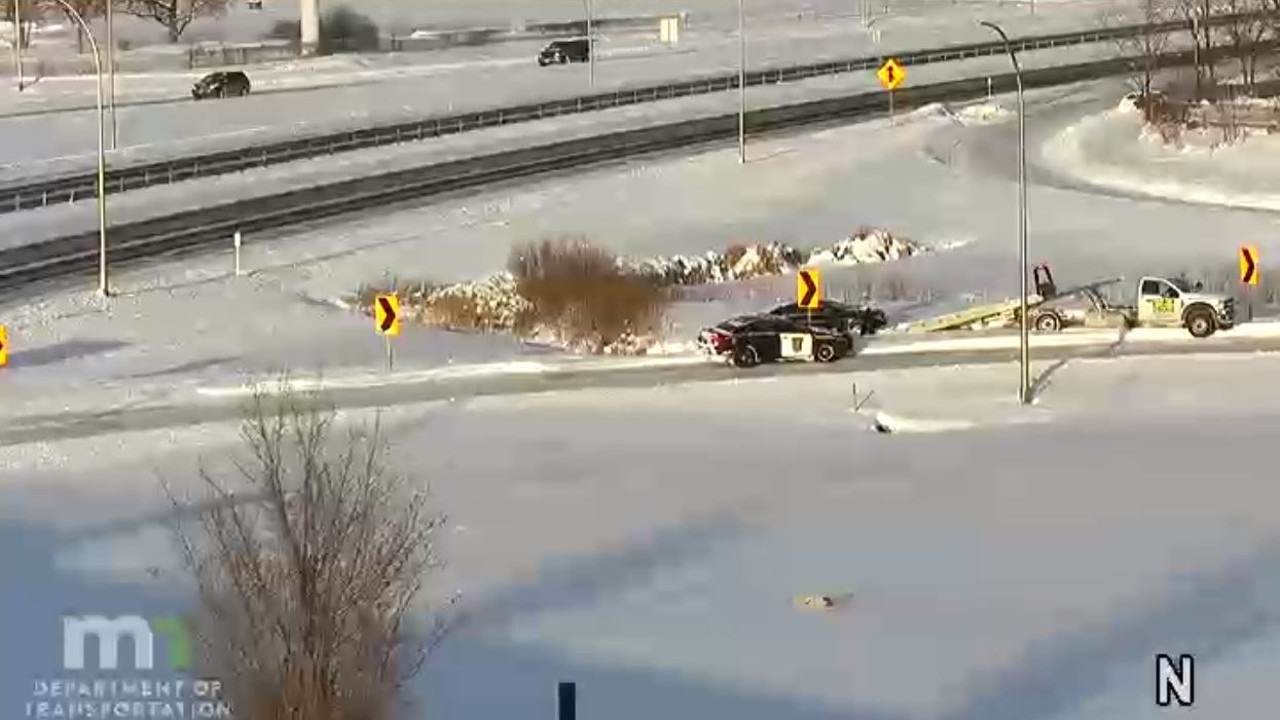 A Minnesota trooper is seen by a vehicle that slid off the road near MN 100 and Brooklyn Boulevard on Dec. 22, 2022. (MnDOT TMC)

UPDATE 12 p.m. – Travelers will be in plenty of company Thursday at Minneapolis-St. Paul International Airport, as officials there say it’s expected to be the busiest day of the holidays.

This comes as the snow, bitter cold temperatures and strong winds take hold of much of the Midwest.

However, misery loves company – more than 12,000 flights have been canceled across the United States so far due to the system. As of this update, a total of 65 flights had been canceled and another 38 had been delayed at MSP – CLICK HERE for the statuses of flights coming in and out of MSP.

An MSP spokesperson says the impact from the storm could get even worse with ice and high winds moving in.

According to the National Weather Service, 8.1 inches of snow fell at the airport. Here are some of the top snowfall reports, according to the agency:

An interactive map from the agency with snowfall totals can be found by CLICKING HERE.

As previously reported, the airport was packed Wednesday morning since many people changed their flight to get out of town to avoid flight cancellations or delays. Several airlines have already offered travel vouchers ahead of the storm.

“Our first flight cancelation – we got to the gate in Winnipeg, and you could see the plane and they were like, we can’t board, your flight is canceled. So, we figured okay, they’ll put us on another flight, but that didn’t happen, so we decided we would hop in the car and drive south to Minneapolis to try and catch a flight to Phoenix,” said Kandace and Kristi, whose flight was canceled due to the winter weather.

That flight to Phoenix was also, unfortunately, canceled so they are now going to attempt to fly out Friday.

Conditions aren’t much better on the roads – the latest data from the Minnesota State Patrol says from 7:30 a.m. to 11:30 a.m. Thursday, there were 125 crashes, with 10 involving injuries. None of those crashes involved serious injuries or fatalities, according to the agency, which also reported 94 vehicle spinouts and one jackknifed semi.

Those numbers were in addition to the 47 crashes that happened from 9:30 p.m. Wednesday to 7:30 a.m. Thursday, and an additional 118 vehicle spinouts.

The latest video forecast can be found in the clip below, or by CLICKING HERE, which also includes a text version of the forecast. An earlier version of this report can also be found below.

INITIAL REPORT: More than a foot of light, powdery snow fell across parts of Minnesota Wednesday and overnight into Thursday, and with wind speeds expected to increase throughout the day, that snow will likely cause visibility issues throughout much of the state.

Here are the latest snowfall accumulations received by the 5 EYEWITNESS NEWS weather team as of 5:30 a.m. Thursday. *Please note these amounts may change since some areas haven’t measured since late Wednesday night:

Thursday morning, the Minnesota State Patrol reported between 9:30 p.m. Wednesday and 7:30 a.m. Thursday, there were nearly four dozen crashes across the state (47), of which four involved injuries, although no one was seriously injured, and no one died. In addition, the agency says there were 118 vehicle spin outs and one jackknifed semi.

Three previous crash updates issued by the State Patrol Wednesday gave a total of 266 crashes across Minnesota, with another 308 total vehicle spinouts and two jackknifed semis.

While no additional snowfall is expected, KSTP’s Chief Meteorologist Ken Barlow says visibilities are expected to be near zero at times in the areas covered by a Blizzard Warning, and down to half a mile in the Twin Cities area. CLICK HERE for the latest weather alerts.

In addition to the visibility issues, wind chills will be near 35-degrees-below-zero at times during the next couple of days. You can find the latest forecast by CLICKING HERE.

Due to the weather and road conditions, hundreds of school districts decided to either close or delay the start of classes. CLICK HERE for a list that will be updated throughout the day. An interactive traffic map can be found below, or by CLICKING HERE.

Plow drivers will be out Thursday to clear the roads. There are more than a dozen snow emergencies in effect throughout the metro area, including St. Paul and Minneapolis. CLICK HERE for a full list.

Flight delays and cancellations at MSP can be found by CLICKING HERE.