Arriving at the school by limo, Grant — wearing a blindfold — and then a broad smile — got his first glance at a brand new playground.

We asked him if the playground was his idea.

“Yeah,” Grant said, responding enthusiastically. “Because it was a fun idea when I think of it.”

“It was Grant who came up with this wonderful idea of being able to give back to the school and the community that has been so supportive of him,” says Kari Davis, the president and CEO of Make-A-Wish Foundation of Minnesota. “To be part of a wish reveal is just the ultimate part of my job. I love it.”

On his special day, this now active little boy is giving, instead of receiving — after a two-and-a-half year battle with Acute Lymphoblastic Leukemia, an aggressive cancer that attacks blood cells, primarily in young children, aged 2-5. 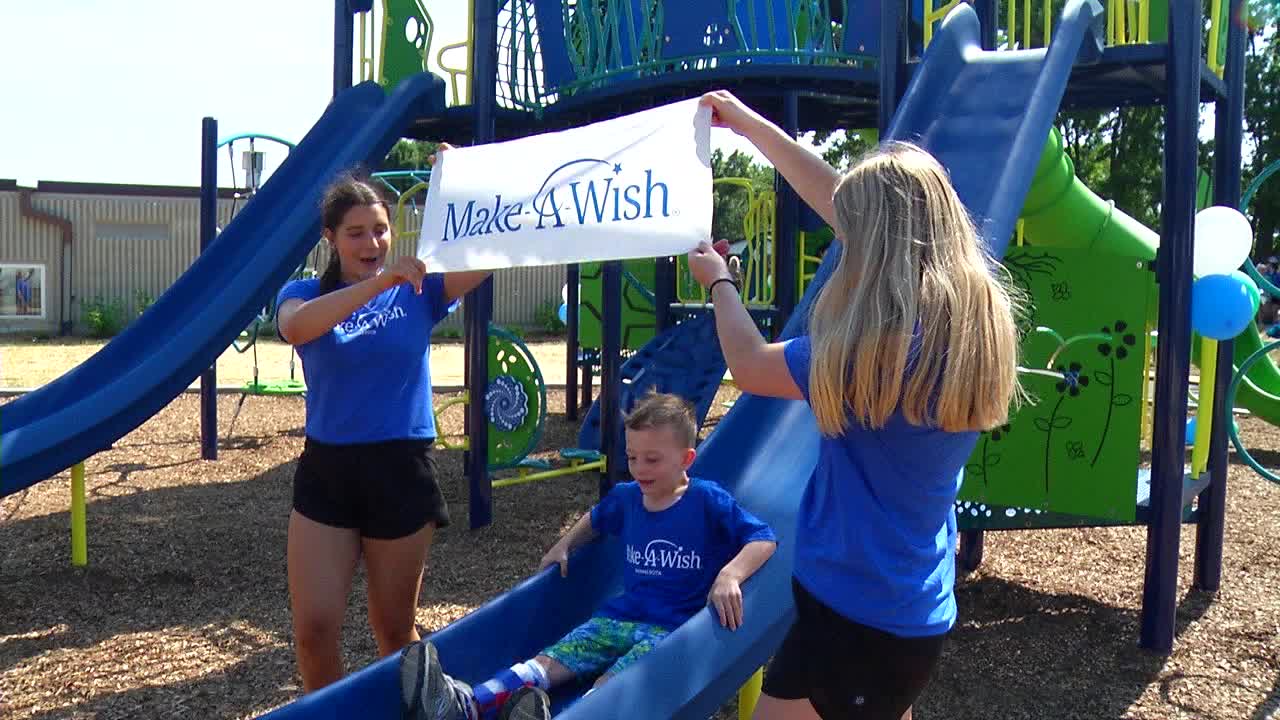 Grant Loven rides down a slide at a playground donated by the Make-A-Wish Foundation (KSTP).

“Lots of pokes and prods,” said Grant’s father, Jay, speaking to dozens of volunteers from the school and the community. “Holding down, and tethered, and IV’s and feeding tubes. Because it’s acute, you have to hit (the cancer) hard right away, so we kicked into action as soon as we found out.”

“We really believe that wishes help them through their journey in staying positive and having hope that they’re going to see the other end of it,” Davis explains.

When the foundation connected with Grant and his family, they learned his wish was for a new playground for all his friends he would meet, when he started kindergarten this fall.

The community jumped into action, rallying around Grant.

“We had labor donated, raw material. It’s just a beautiful story of our community coming together,” Dingels says. “We’re so grateful to have all the sponsors and volunteers that we did to make this possible for Grant.”

Next to the playground is a stone marked “Grant’s Wish.”

He and dozens of other kids certainly looked like they were enjoying the new playground, completed Monday night.

“I kind of like the top slide because it’s so fun to go down,” Grant smiled. “Because it takes a longer time and gives me a chance to do some checks before I go to the thing because I do not want to fall off.”

Loven says in the early 1980s, when Make-A-Wish was just getting started, the survival rate for Acute Lymphoblastic Leukemia was just above 35%.

He says with advances in medicine, the survival rate is now above 90%.

Grant’s parents say they hope someday he’ll return to the school to show his own children this very special playground.

“We are so blessed that he is, where he is health-wise,” Loven says. “And to be granted this wish is something that blows our mind. We are so blessed, that’s all I can say.”

You can find out more about Make-A-Wish Foundation of Minnesota here.