‘Banking While Black’: Police video shows how cashing a paycheck led to handcuffs

Joe Morrow had just finished a 12-hour shift as an "order picker" at a grocery distributor in Hopkins last year when he stopped at a U.S. Bank branch in Columbia Heights to cash his paycheck.

Despite having an account with the bank and showing his ID, that simple transaction led to a call to police, threats of arrest, and Morrow being placed in handcuffs.

A bank manager told officers he suspected the check was a fake, but police body camera video shows he only called Morrow’s employer for verification after the 23-year-old Black man was removed from his office.

The check was, in fact, real. 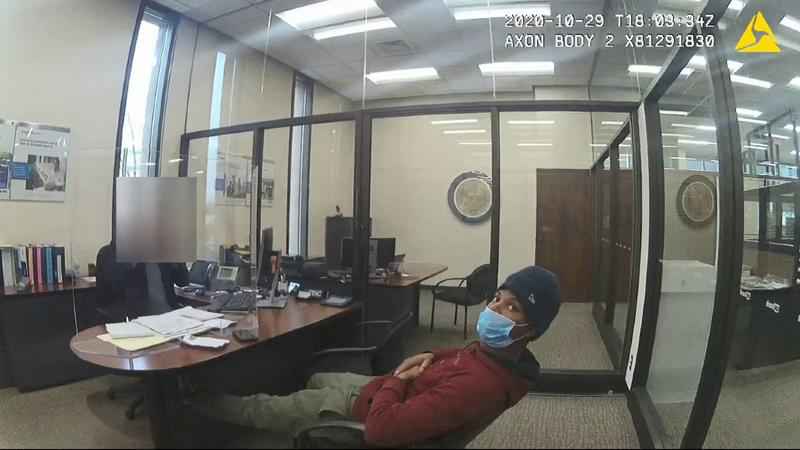 This is how police found Joe Morrow when responding to a call from U.S. Bank in Columbia Heights for a "possible fraudulent check" on Oct. 29, 2020.

Lawyers and advocates say Morrow’s experience raises questions about implicit bias and is part of a national phenomenon that more Black Americans have been documenting in recent years with the social media hashtag "Banking while Black."

"When I’m coming out of (the manager’s) office I was handcuffed… people were looking… like I’m a criminal or something," Morrow said.

U.S. Bank declined requests to share any video of what happened inside the bank before police arrived, but 5 INVESTIGATES obtained 45 minutes of footage from the body-worn cameras of the two officers who responded to the call for "a possible fraudulent check" and a suspect who was refusing to leave.

John Askwith, the bank manager who called police, is blurred and muted in the video, as required by state law, because he did not consent to its release.

In the first minute of the video, Morrow can be heard asserting his innocence.

"I work there, bro. And I’m going to report you too, bro. This is racial," Morrow said to Askwith.

The video does not appear to show Morrow raising his voice or using profanity, but his claim of racial profiling was immediately met with a warning.

"Joe, I need you to calm down, first of all, OK?" Pletcher said. "Don’t say anything stupid because you’re just going to get arrested for it."

Minutes later, after a second officer arrived, police say the manager asked them to move Morrow to an adjacent office.

The video then shows officers handcuffing Morrow after he appeared to stand up quickly from his chair.

In the incident report, Pletcher wrote that Morrow "flexed at John (Askwith) in a threatening manner."

"I didn’t threaten him. I got up, like, I’m mad," Morrow said. "The guy told the officer, can you get him out of my office? He might take something on my desk… that’s when I got super mad. I’m going to touch something on your desk?"

5 INVESTIGATES showed the police body camera video to Samuel Myers Jr., a professor at the University of Minnesota who has researched racial disparities in banking for more than 30 years.

Myers authored a report titled "Responsible Banking in the Twin Cities" in 2015 that looked at discriminatory lending practices.

The report also gave failing grades to many of the largest financial institutions for their performance in areas such as customer service provided to minorities.

"The fact is these are experiences that Black people disproportionately encounter and the evidence is indisputable," Myers said.

Morrow says his frustration began before police arrived when he first asked a teller to cash his paycheck for about $900.

"The manager? He came over and said, ‘Joe Morrow? Your check (is) fake.’ And I said, what?" Morrow said. "He said, ‘you people always coming in here with fake checks.’"

According to the police report, the bank manager told police he had received "a lot of fraudulent checks" using the UNFI logo.

Morrow says Askwith, the manager, told him he had already called the company and confirmed the check was a fake, but the officers’ body camera video confirms Askwith only made that critical phone call to UNFI after police arrived and had Morrow in handcuffs.

While still detained, he offered more evidence that his paycheck was real.

"I got the check stub and it’ll say what day it started and all that and how many hours I worked… I could’ve came in here and showed them that," Morrow told the officer.

A Mississippi native who moved to Minnesota earlier in 2020, Morrow says the experience was "degrading" and unlike anything he had ever encountered.

When he first sat down to speak with 5 INVESTIGATES in October, Morrow’s attorney, Rich Hechter, had sent at least two letters to U.S. Bank asking for a settlement and an explanation.

U.S. Bank declined multiple requests to interview Askwith or anyone else at the bank.

"At U.S. Bank, we’re committed to fairness toward everyone we serve regardless of race," spokesperson Lee Henderson said in his initial email to 5 INVESTIGATES in October, adding "we dispute the facts as they’re being portrayed to you."

U.S. Bank reached a confidential settlement with Morrow two weeks later, but continues to defend how its employees handled the incident.

"After a thorough internal investigation, there is nothing to indicate that the customer’s race or ethnicity played a factor in the service he received at this branch," Henderson said last week.

That conclusion is disputed by some of those who have now heard Morrow’s story and seen the video, including community leaders such as Tyrone Terrill, former director of the St. Paul Department of Human Rights and president of the African-American Leadership Council.

"There’s no question in my mind, had he been white, this would have never happened," Terrill said. "There are many things that happen in a store, in a bank, in a restaurant, in a hotel – you name it – that Black people get treated differently."

Myers, the University of Minnesota professor, cautions that such incidents rarely involve overt racism.

"What you frequently hear among whites in Minnesota is that ‘I’m not racist,’" Myers said. "The point is that you don’t have to be a conscious, insidious, hostile bigot in order to engage in actions that have a discriminatory effect."

Combating so-called "implicit bias" is the focus of the "Fair and Impartial Policing Training" program, which has been used by law enforcement agencies across the country.

Lorie Fridell is the founder of that program and agreed to review the body camera video of the incident at U.S. Bank in Columbia Heights.

"I did not discern anything in the video that showed Mr. Morrow as being threatening," Fridell said. "Maybe they saw things that I did not see or maybe this could be related to one of the implicit associations that’s well documented in the research. And that research shows that many of us see more threat in people of color."

Fridell, who is also a professor at the University of South Florida, says those biases are often unconscious – a point that’s highlighted in her training.

Fridell commended Sgt. Pletcher for doing what she called a "debrief" with Morrow after the bank confirmed his check was legitimate.

Morrow remained in an office at the bank for more than 10 minutes after officers removed his handcuffs.

Pletcher did most of the talking during that time, telling Morrow he wanted to speak with him "man to man" about the confusion over his paycheck.

"They’re making fake checks with that logo on it, right?" Pletcher can be heard saying to Morrow. "I need you to stay calm for that, OK? Because when you start acting like this, it makes you look guilty."

While Fridell said such a moment can help to reduce tension, others are critical of that particular interaction.

"So, the question is what is acting guilty?" Myers said. "You’re blaming (Morrow) for creating the racism that he feels."

Terrill also criticized Pletcher’s choice of words in the body camera video when the sergeant is heard telling Morrow that he should "wait to be validated."

"’Wait to be validated’ – That’s 450 years of history of slavery," Terrill said. "Do we got to still wait for white America to validate us? Come on."

"This incident has been reviewed and the officers’ actions in this situation were reasonable and they conducted themselves professionally," Chief Lenny Austin said in a written statement.

Sgt. Pletcher sent 5 INVESTIGATES links to stories from network news programs when Pletcher was praised on national TV for his handling of a call involving a Black state employee two days after the death of George Floyd.

"I think we need more police officers to speak up," Pletcher said on the Today Show in June of 2020.

He declined requests to speak on the record about what happened at U.S. Bank.

At the end of the body camera video, Pletcher can be heard apologizing to Morrow for his experience as they walk out of the bank.

It is unknown if Morrow received a formal apology from U.S. Bank since the two sides reached a confidential settlement.