At pop-up market in south Minneapolis, Black entrepreneurs share hope for the future

Along East Lake Street in Minneapolis, hit hard by the riots last spring, there was a special gathering Saturday

“I believe that there’s hope,” says Jacqui Ward, from Brooklyn Center. “We’re more together now than we ever were.”

The Midtown Global Market hosted a pop-up event for Black entrepreneurs. Organizers say it was a sort of new beginning for the neighborhood.

“It’s coming back,” says Amber Treelis, the event coordinator. “The heart and soul is so deep here. Everybody, the community is amazing.”

But the authors, artists, and small business owners weren’t just selling their work — they also have ambitious ideas to build a better future. 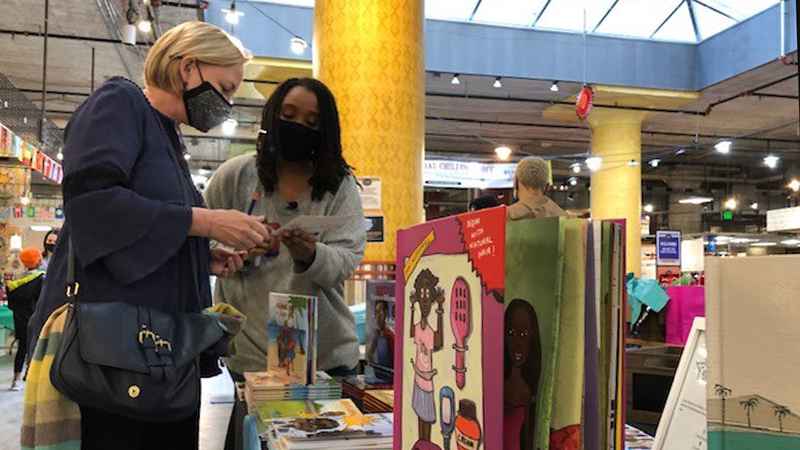 "We are all trying to work together and build our businesses up,” Ward says.

A year-and-a-half ago, she started marketing a clothing line out of her Brooklyn Center home. So far, she’s sold about 500 items of apparel.

“It’s setting a great example for the children that are coming up, and seeing this from the parents as a community,” Ward said.

The metro saw more than its share of hardship in 2020. The pandemic, the death of George Floyd and the riots that followed all impacted the community deeply.

“The biggest thing is representation,” Crown Shepherd, a children’s author, who published her first book in May of 2020. “Only 8 percent of the books that are coming out are for Black children.”

She and some friends started what they called "fighting literature," a campaign to get books to children of color with characters that reflected themselves.

Shepherd says she’s sold about 2,000 of her books and has given away hundreds more.

"We were handing out quite a few books you see on the table to kids at protests, at the George Floyd site,” Shepherd said. “And they’re in the middle of the street reading a Black book. And their faces light up because it’s like all this turmoil around them, but then they have this thing where they can be seen and be represented."

And then there’s Shanee O’Neal.

"Let’s get a really cute, unique, cheap, fashionable line coming for the little girls,” she said.

A restaurant server for several years, O’Neal started a girl’s clothing line last November, in the middle of the pandemic, called Regin Love, named after her cousin.

"The pandemic isn’t going to happen forever,” O’Neal said. “So when we get out of this, we need to let the kids know after this they’re pretty and they need to rock."

You likely have noticed a theme here: Many vendors were marketing toward children and their families.

Saturday’s event was in recognition of World Day of Social Justice, a time for frank talk about issues like poverty, gender equality, unemployment and human rights.

The Midtown Global Market is planning to do the pop-up market again next Saturday. It’s all part of a new season — and new beginnings — after a difficult year.

“The message is there’s always hope, that we’ve got to fight, but there’s always a brighter light at the end of the tunnel,” Shepherd said. “And that you can be whatever you need to be or want to be in life.”