As Title IX marks 50 years, woman who pioneered organized girls’ sports in Minnesota says ‘best is yet to come’

The next generation of athletes is warming up at Strike Zone Sports in Eagan. Dozens of young women sought out private softball lessons on Thursday as the nation celebrated the 50-year anniversary of Title IX.

The landmark legislation was signed into law in 1972. It reads, “No person in the United States shall, on the basis of sex, be excluded from participation in, be denied the benefits of, or be subjected to discrimination under any education program or activity receiving Federal financial assistance.”

The same year it passed, the first Minnesota State High School League girls competition took place. The chance to compete on every level has grown in the decades since.

“It gave us and all of our instructors here the opportunity to play in college and to get our degrees and to be able to dream about having a career doing this,” said Sara Moulton, the co-owner of Strike Zone Sports. “You can do anything you set your mind to now because of these opportunities and these doors that have been opened and all of the glass ceilings that have been shattered.”

Moulton competed as a member of the University of Minnesota’s softball team for four years and graduated in 2014 with a long list of accolades. She and co-owner Sam Macken won a Big 10 Championship title as teammates during her senior year. 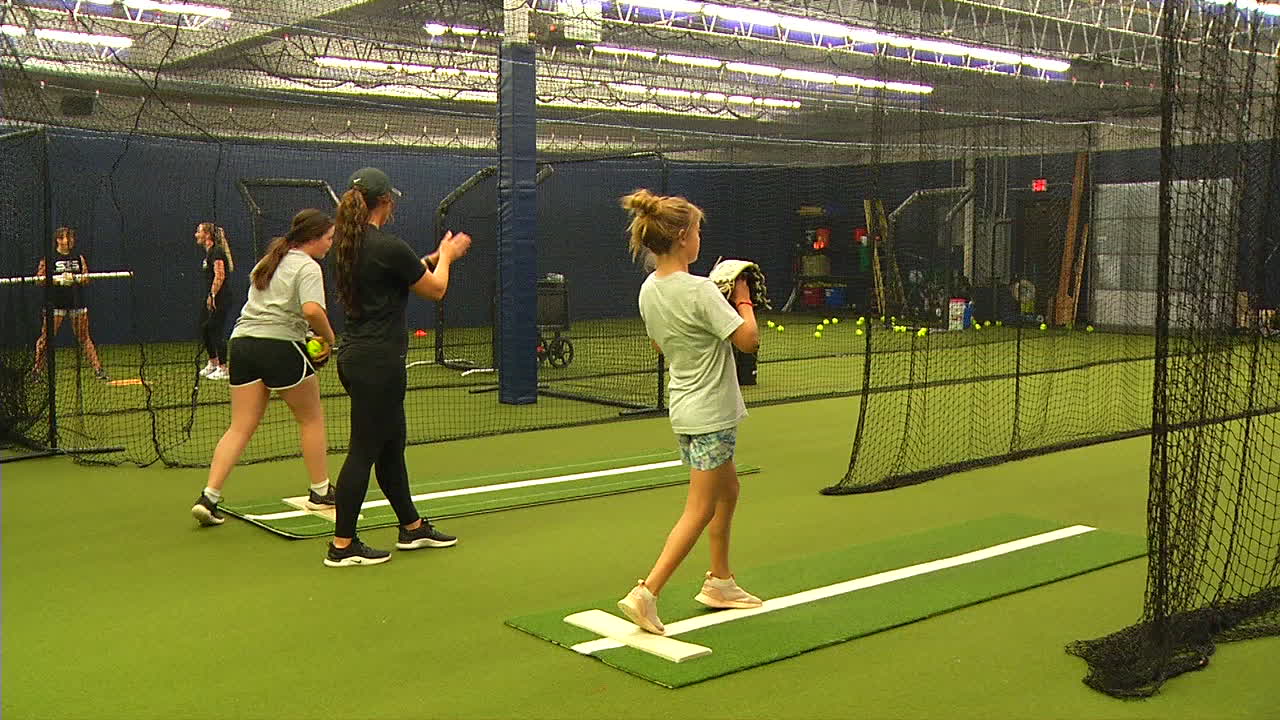 “We just hope we can reach as many kids as we can and help them in softball but also in life,” said Moulton, who played professionally with the Chicago Bandits after college.

Macken added, “I am so thankful for the experiences I had. I love giving back and helping those kids achieve or follow their dreams like we did.”

These athletes understand every pitch instruction, and every practice hit empowers the young women to achieve their goals.

“None of that would’ve been possible without Title IX being passed 50 years ago,” said Moulton.

When Title IX passed in 1972, Minnesota was already in the process of implementing a girls sports program.

Dorothy McIntyre was instrumental in advocating for women’s athletics statewide. The retired teacher and coach explained to 5 EYEWITNESS NEWS that there was a Girls Athletic Association in the 1960s for students, but it was limited to a recreational program.

“There’d be a knock on the door, and they’d say, ‘Ms. McIntyre, why can’t we do what the boys are doing?'” said McIntyre.

She pressed for more opportunities for women, gaining the support of the MHSHL executive at the time. According to McIntyre, the league agreed to sponsor a women’s program in the fall of 1968.

“A guy was standing in the doorway of the ballroom where I was, and he said, ‘I bet you a quarter it doesn’t pass,'” said McIntyre. “I think I might’ve given one of the better presentations of my life that day because when we got done, the vote was 32 to zero in favor of having girls sports in Minnesota.”

The passing of Title IX just a few years later underscored the responsibility of schools to get young women involved in competitive sports.

“It was nice to be able to say here are the reasons why — it’s good for your young women, it’s healthy, it’s going to make them into great strong young women and good citizens. But also, there’s a federal law that says you may not provide them with less opportunity than you do the boys in your school,” she explained.

She joined the MSHSL staff in 1970 and spent several decades with the league. McIntyre was instrumental in implementing the new law in Minnesota.

“This has not been an easy 50 years,” she said. “There were some hard core resistance to some of the things that were happening. There was a lot of what I call the old fashioned blood, sweat and tears that went into making changes. […] There were those that simply said ‘No, I’m not going to share’ and it took sometimes courts and state laws.”

Over the last five decades, McIntyre has been proud to see the accomplishments of the young women she coached. She said she’s also encouraged by the momentum of women’s athletics right now, including the U.S. Women’s Soccer team’s achievement of equal pay.

“When someone says, why do you want us to spend all of this time and money on girls and women? It’s because they are our future, and they are going to contribute to this world and are doing so now in a way we’ve never seen before,” she said. “We are only in the first 50 years, and I would say stick around because the best is yet to come.”

Moulton pledged to continue to fight for advancements in women’s sports and Title IX, recognizing the trailblazers that paved the way for her achievements.

“I would just say I’m so thankful and so grateful for everything they fought for and all of the opportunities it created, allowing us to dream and believe and achieve,” said Moulton.