A former Brooklyn Center Police Sergeant testified Friday that former Officer Kimberly Potter may have been justified in using her gun during a fatal traffic stop in April. Potter is charged with first and second degree manslaughter for the death of Daunte Wright.

“Based on these videos and the conduct of Daunte Wright, as far as you’re concerned, and you were there, Potter would’ve had a right to use a firearm, right?” asked defense attorney Earl Gray.

Mychal Johnson, who is now a major with the Goodhue County Sheriff’s Office, responded “yes”.

The question from Gray followed cross examination that argued Johnson could have been at risk during the attempted arrest. Johnson testified he was inside the vehicle, holding onto Wright’s arm to prevent him from driving away, when he heard ‘taser, taser, taser’.”

“If he had taken off with you in the car halfway, what would’ve happened to you? What do you think would be the worst that would happen?” asked Gray. Johnson responded, “Probably dragged” and added “seriously injured” and potentially killed while being questioned by Gray. 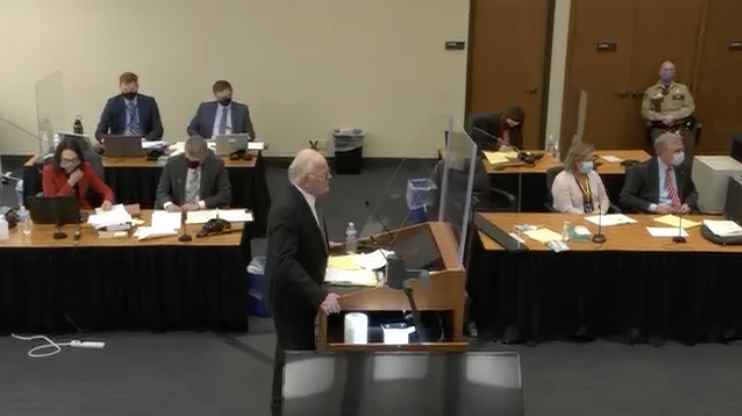 Experienced Twin Cities trial attorney Lee Hutton, who is unaffiliated with this case, said although the state called Johnson, “I thought Sergeant Johnson’s testimony was very significant with regard to helping Officer Potter.”

Johnson testified for about two hours on Friday. After he was brought to the stand, Assistant Attorney General Matthew Frank walked through his response to the traffic stop, his attempts to control Wright from the passenger-side of the vehicle, and his reaction in the aftermath of the shooting.

“Did you just stand up as the car pulled away?” asked Frank. Johnson said yes.

“When you had your hand on Mr. Wright, you had both your left and right hands on Mr. Wright’s arm, did the car move?” said Frank. Johnson responded “No.”

“I didn’t think the state did a good job when they were talking about the wrist lock of saying, ‘Well, if you thought you were going to be carried away, why wouldn’t you just let go?’ or, ‘Why would you kind of reach in the car?’, which they started going along those lines, but I think the objections actually threw him off,” said Hutton.

The defense was effective at interrupting the flow of the state’s questions, according to Hutton. He was also surprised prosecutors didn’t object to Gray’s questions about whether Potter was justified in firing her weapon.

“There wasn’t an objection from the state with regard to illegal conclusion,” explained Hutton. “Witnesses are not able to give certain conclusions on the law. While they are on the stand, the jury is supposed to determine whether the facts fit the law.”

The defense did object to Frank’s redirect, a question that led to Johnson confirming Potter could’ve shot him when she fired her weapon.

“There were a lot of objections by the defense which kind of broke up the routine of the prosecution,” said Hutton.

Jurors also learned that in the aftermath of the shooting, Johnson swapped guns with Potter. He testified that he took her firearm from its holder and placed it in his holster, and placed his gun in her holster. He said he wanted to ensure the evidence was preserved.

“What the state is suddenly using is this kind of the disgruntlement that the community has with the credibility of officers,” said Hutton. “I have to assume that the jury in the back of their mind says something doesn’t seem right for him to switch guns and for them to have that information. What are they trying to cover up? I don’t think that [prosecutors] eventually closed it home but I do think the jury has that lingering question.

In addition, jurors learned that Johnson later removed the ammunition from his gun. He testified there were concerns Potter might try to harm herself.

Hutton weighed in on how that piece of evidence could affect the state’s case.

“After the situation we see a very distraught Officer Potter, a very scared Officer Potter, an officer who seemed to admit that she did something wrong and even questioned whether or not she was going to go to prison,” he said. “Where that is important is that you have to think was Officer Potter, with all this training, in the best position to handle traffic stops? Let alone handle a loaded gun to make a decision to use deadly force? And that can be within recklessness itself.”

“I still think [the state] has a lot more to do,” said Hutton. “I think the discussion of whether or not this was reckless or a simple mistake, I think there’s a lot of people that have a big question mark.”

The Hennepin County Medical Examiner who performed Wright’s autopsy is expected to testify on Monday.

He expects prosecutors will now focus on police training and department policy, along with Wright’s injuries.