At North Community High School Saturday, the auditorium stage was transformed into a classroom of hope.

“It’s a respite, an artistic respite for the community,” declared Sean Garrison, a north Minneapolis artist. “Bad things are happening in north Minneapolis, unfortunately a lot of violence and whatnot. These performances are a coming together of a bunch of artists who are saying hey, just for a couple of hours, it’s time to be free.”

Poet Des Damona — among the participants — says this is an especially challenging time for young people.

“I think just the realization that your life can be gone in a moment, we all realize that — like how precious life is,” she explains. “It’s hard to have hope right now, so I think it’s the little things that matter — the way we treat each other, the way we interact, the way we see each other.”

“Northside is bleeding in more ways than one, and I think art can fill in those gaps,” Garrison adds.

Away from his giant palette and sound system, the 53-year old artist has been a youth employment counselor for three decades. 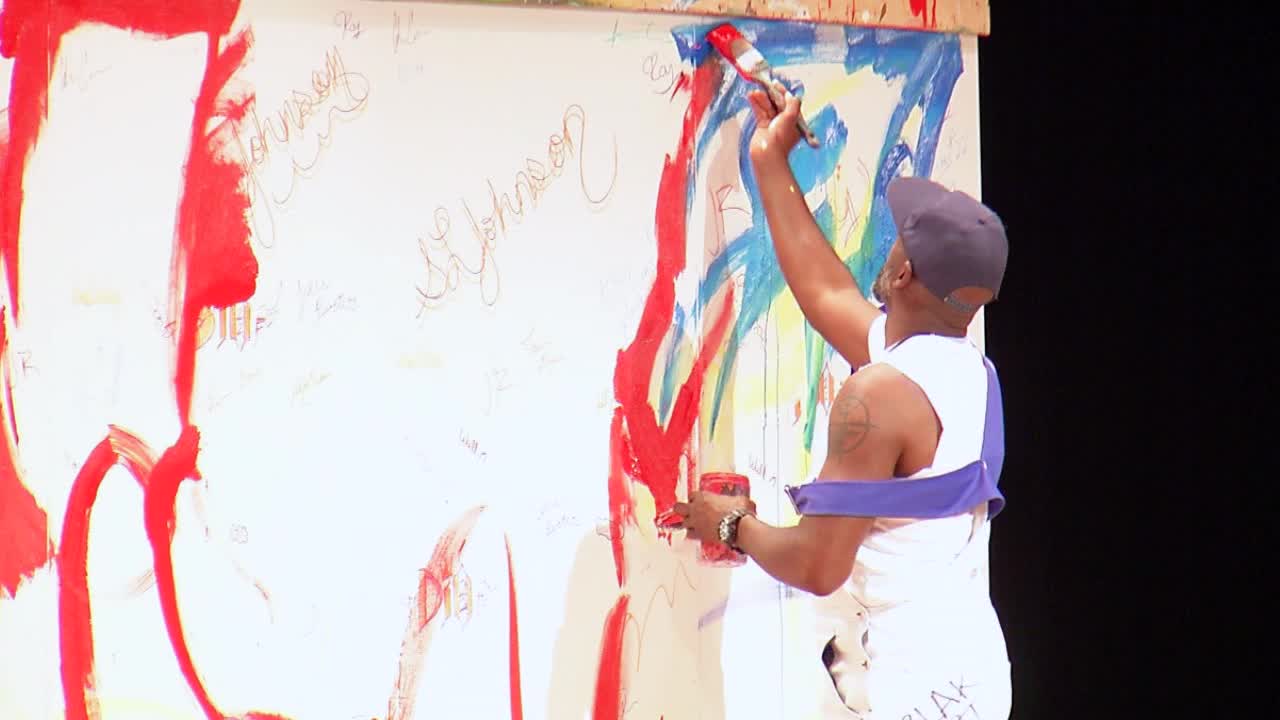 Sean Garrison paints a mural at North High School to create an "artistic respite for the community" (KSTP).

Over the years, he says, he’s known 10 young people who were murdered in the streets.

“These are all our children,” he exclaims. “If we are as human as we say we are, then we’ll make sure we’re concerned and we care about everybody.”

A week ago Friday — three people were gunned down at a Lake Street bus stop.

None of this was lost on members of the Brooklyn Park Lions Drum and Dance Team — playing at the Northside Love event.

“I mean, I know a lot of people who have gun violence, and I feel a lot of people need this,” he says. “That’s one of the reasons why I joined the drum team, it keeps me off the streets, keeping busy. Stuff like this helps a lot.”

Lloyd’s mother, Stephanie — says she is making sure to spend more time with her children, whether it’s just taking a walk, or watching them in a pickup game of basketball.

But she adds there are also those important talks about being careful anywhere away from home.

“I try to encourage him, and I do talk to him about that, being safe at school,” Green says. “It just takes showing them love. Some days are better than others. But as a parent, my goal is to work with my son to let him know I love him.”

Garrison says he hopes his event will inspire other parents as well. “For adults, we have to be brave enough to stand in the fire with some of these young people, and talk them through this stuff, because it’s not easy,” he says. “These young folks, they have to know that there is truly a beautiful tomorrow. We need to be able to build that tomorrow for them.”

You can find out more about the Northside Love organization here.