An Arizona family is welcoming its newest addition: A 14-pound baby named Finnley.

Born on Oct. 4 via Caesarean section, Finnley’s size surprised doctors as he weighed in at 14 pounds, 1 ounce, which is about double the average weight of a newborn. He’s also a tall infant, measuring at about 24 inches.

"They got him on the scale — like, 14.1, I’ve never seen it that big," mom Cary Patonai said. "The doctor and one of the sweetest nurses there they were all taking selfies with us, they asked permission of course, but they were just so pumped."

Patonai was at her doctor’s appointment and was getting weighed after finishing her ultrasound when her water broke, she shared on Facebook. He was born at 1:56 p.m. on Oct. 4. Finnley spent more than a week in the neonatal intensive care unit and got to come home on Oct. 12.

The Patonais are calling Finnley a "miracle." They have two other sons but had been trying to have another child unsuccessfully, with two miscarriages, since last year. Before having their 2-year-old, the Patonais suffered 17 miscarriages — two of which were sets of twins. 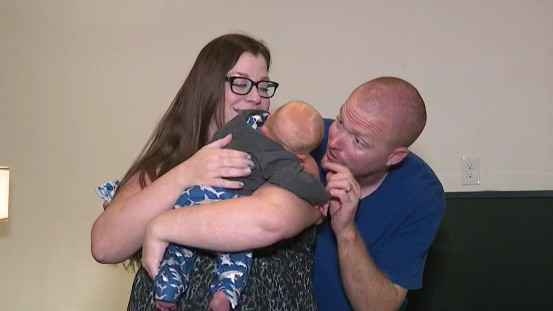 "It was very difficult," she said.

His brothers were born at 11.11 and 8.2 pounds, but Finnley shattered that record and the Patonais quickly realized the clothes and diapers they’d bought wouldn’t fit him.

Finnley is now sporting size two diapers — which are typically for three- to eight-month-olds — and the family is already predicting his future.

"Football player — get him in those pads," dad Tim Patonai said.