A new pet in the home should be an exciting time, but for an Apple Valley family, that experience quickly took a turn when their newly adopted Dutch shepherd, Daisy, escaped unexpectedly.

At 18 months old, Daisy has already had a difficult life. She was found tied to a trailer in South Carolina. Pet Haven, the Minnesota rescue organization that saved her, said she was so emaciated and dehydrated she could not even stand. They brought her up to Minnesota to live with a foster family until she found a forever home.

Jill and Wayne Steele are volunteers with Pet Haven and stepped up to rehabilitate Daisy.

"I don’t think we’ve ever encountered such a terrified dog. I mean, we could barely get her out of the crate," Jill Steele said.

It was days before they could get Daisy to come out of her crate. Three weeks later, with lots of encouragement and love, they finally got the dog to a place where she was ready to be adopted. 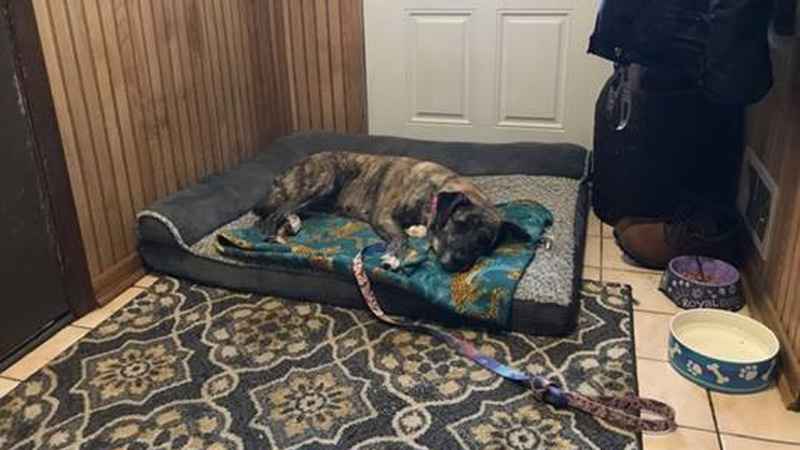 Daisy, an 18-month-old Dutch shepherd, lays on her bed.[Courtesy of Pet Haven]

Barbara and John Andrews were so excited about their new dog. The Apple Valley couple was looking for another dog to keep their 15-year-old dog, Lacey, company after their other pet passed away. After several meetings, Daisy was the perfect fit for their family.

But on Monday of last week, the excitement quickly turned to panic when Daisy escaped from the family’s fenced backyard. They knew Daisy would be petrified because of her severe history of abuse — plus she got out in the middle of a snowstorm.

"The thought of her being alone and cold and of all the days, we’ve had beautiful weather and then suddenly Monday was cold and wet and snowy and miserable," Steele said.

Both the Steeles and the Andrewses quickly jumped to action and got a search party together. They believe as many as 600 people were out looking for Daisy. There were several spottings, but no one could get close because the dog was so timid.

They tracked her journey starting at 7 a.m. when she got out. She spent 24 hours away from home and roamed over 3 miles. Someone even contacted the families and told them they saw Daisy fall into a lake but watched her climb out onto the ice.

Tuesday morning, Daisy had burrowed her way back into the Andrews’ yard just in time for Jill and Wayne Steele to show up.

"I sort of got down and I saw her and I said, ‘Daisy, it’s mom,’ and you could kind of see initially the terrified look on her face and then the lights went on of recognition and she came running,” Steele said.

Both families are grateful she found her way back home and they plan to watch her carefully.

"She’s safe, she’s back. Now I hope she knows how loved she is," Steele said.