President Joe Biden on Friday nominated federal appeals court Judge Ketanji Brown Jackson to the Supreme Court, the White House said, making her the first Black woman selected to serve on a court that once declared her race unworthy of citizenship and endorsed segregation.

In Jackson, Biden delivers on a campaign promise to make the historic appointment and to further diversify a court that was made up entirely of white men for almost two centuries. He has chosen an attorney who would be the high court’s first former public defender, though she also possesses the elite legal background of other justices.

Jackson would be the current court’s second Black justice — Justice Clarence Thomas, a conservative, is the other — and just the third in history.

She would also be only the sixth woman to serve on the court, and her confirmation would mean that for the first time four women would sit together on the nine-member court. 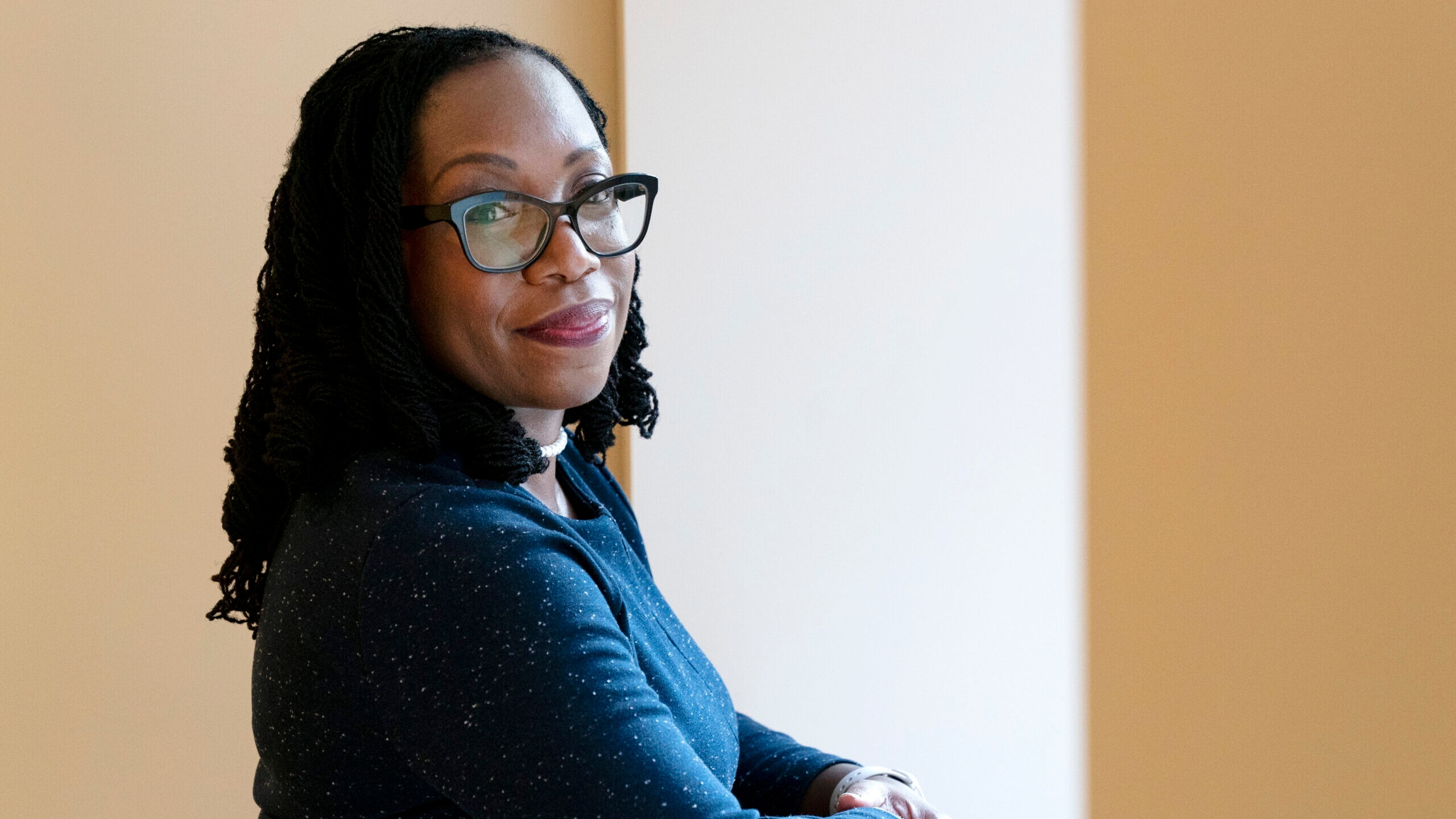 Judge Ketanji Brown Jackson, a U.S. Circuit Judge on the U.S. Court of Appeals for the District of Columbia Circuit, poses for a portrait, Friday, Feb., 18, 2022, in her office at the court in Washington. (AP Photo/Jacquelyn Martin)

The current court includes three women, one of whom is the court’s first Latina, Justice Sonia Sotomayor.

Jackson would join the liberal minority of a conservative-dominated court that is weighing cutbacks to abortion rights and will be considering ending affirmative action in college admissions and restricting voting rights efforts to increase minority representation.

Biden is filling the seat that will be vacated by Justice Stephen Breyer, 83, who is retiring at the end of the term this summer.

Jackson, 51, once worked as one of Breyer’s law clerks early in her legal career. She attended Harvard as an undergraduate and for law school, and served on the U.S. Sentencing Commission, the agency that develops federal sentencing policy, before becoming a federal judge in 2013.

Her nomination is subject to confirmation by the Senate, where Democrats hold the majority by a razor-thin 50-50 margin with Vice President Kamala Harris as the tie-breaker. Party leaders have promised swift but deliberate consideration of the president’s nominee.

The next justice will replace one of the more liberal justices, so she would not tip the balance of the court, which now leans 6-3 in favor of conservatives.

The news comes two years to the day after Biden, then struggling to capture the Democratic presidential nomination, first pledged in a South Carolina debate to nominate a Black woman to the high court if presented with a vacancy.

Senate Judiciary Committee Chairman Dick Durbin has said that he wants the Senate to move quickly on the nomination. Senators have set a tentative goal of confirmation by April 8, when they leave for a two-week spring recess. Hearings could start as soon as mid-March.

That timeline could be complicated by a number of things, including the ongoing developments between Russia and Ukraine and the extended absence of Democratic Sen. Ben Ray Lujan of New Mexico, who suffered a stroke last month and is out for several weeks. Democrats would need Lujan’s vote to confirm Biden’s pick if no Republicans support her.

The entire process passes through several time-consuming steps, including meetings with individual senators that are expected to begin next week. While Justice Amy Coney Barrett was confirmed just four weeks after she was nominated ahead of the 2020 election, the process usually takes several weeks longer than that.

Biden and Senate Democrats are hoping for a bipartisan vote on the nomination, but it’s unclear if they will be able to win over any GOP senators after three bitterly partisan confirmation battles under President Donald Trump. South Carolina Sen. Lindsey Graham, one of three Republicans who voted to confirm Jackson to the appeals court last year, had pushed Biden to nominate a different candidate from his home state, Judge J. Michelle Childs. He said earlier this month that his vote would be “very problematic” if it were anyone else.

Jackson was on the president’s short list as a potential nominee even before Breyer retired. Biden and his team spent weeks poring over her records, interviewing her friends and family and looking into her background.

Biden has said he was interested in selecting a nominee in the mold of Breyer who could be a persuasive force with fellow justices. Although Breyer’s votes tended to put him to the left of center on an increasingly conservative court, he frequently saw the gray in situations that colleagues were more likely to find black or white.

“With her exceptional qualifications and record of evenhandedness, Judge Ketanji Brown Jackson will be a Justice who will uphold the Constitution and protect the rights of all Americans, including the voiceless and vulnerable,” said Senate Majority Leader Chuck Schumer. “The historic nomination of Judge Jackson is an important step toward ensuring the Supreme Court reflects the nation as a whole.”

As part of his search process, Biden, a longtime chair of the Senate Judiciary Committee, also interviewed Childs and California Supreme Court Judge Leondra Kruger, according to a person familiar with the matter. He also consulted with a wide range of legal experts and lawmakers in both parties and delved deeply into the finalists’ legal writings before selecting Jackson for the post.

Jackson serves on the U.S. Court of Appeals for the District of Columbia Circuit, a position that Biden elevated her to last year from her previous job as a federal trial court judge. Three current justices — Thomas, Brett Kavanaugh and John Roberts, the chief justice — previously served on the same court.

On Friday morning ahead of the announcement, Jackson took part in scheduled arguments before the circuit court.

Jackson was confirmed to that post on a 53-44 Senate vote, winning the backing of three Republicans: Graham, Maine’s Susan Collins and Alaska’s Lisa Murkowski.

Graham, in a tweet, indicated displeasure with the nomination, saying, “I expect a respectful but interesting hearing in the Senate Judiciary Committee.”

Bipartisanship is important to Biden, who has often said he was reaching for GOP support as he closed in on a nominee. Another GOP connection: Jackson is related by marriage to former House Speaker Paul Ryan of Wisconsin.

In one of Jackson’s most high-profile decisions, as a trial court judge she ordered former White House Counsel Don McGahn to appear before Congress. That was a setback to former President Donald Trump’s efforts to keep his top aides from testifying. The case was appealed, and a deal was ultimately reached for McGahn’s testimony.

Another highly visible case that Jackson oversaw involved the online conspiracy theory “pizzagate,” which revolved around false internet rumors about prominent Democrats harboring child sex slaves at a Washington pizza restaurant. A North Carolina man showed up at the restaurant with an assault rifle and a revolver. Jackson called it “sheer luck” no one was injured and sentenced him to four years in prison.

Jackson has a considerably shorter record as an appeals court judge. She was part of a three-judge panel that ruled in December against Trump’s effort to shield documents from the House committee investigating the Jan. 6, 2021, insurrection at the U.S. Capitol.

Jackson was born in Washington, D.C., and grew up in Miami. She has said that her parents, Johnny and Ellery Brown, chose her name to express their pride in her family’s African ancestry. They asked an aunt who was in the Peace Corps in Africa at the time to send a list of African girls’ names and they picked Ketanji Onyika, which they were told meant “lovely one.”

Jackson traces her interest in the law to when she was in preschool and her father was in law school and they would sit together at the dining room table, she with coloring books and he with law books. Her father became an attorney for the county school board and her mom was a high school principal. She has a brother who is nine years younger who served in the Army, including in Iraq, and is now a lawyer.

Judge Jackson’s nomination to the Supreme Court is historic. There have been 115 Supreme Court Justices and if confirmed, she will be the first Black woman. She is a jurist who understands the experiences of everyday Americans and she will bring her unique perspective to the highest court in the land.

I’ve been proud to support her three previous nominations, and I look forward to meeting with her and working with my Senate colleagues on both sides of the aisle on the Senate confirmation hearing.

Judge Ketanji Brown Jackson is exceptionally well-qualified to serve on the Supreme Court, and her demonstrated commitment to defending the constitutional and civil rights of all Americans makes her an outstanding choice of nominee. This is an exciting and historic nomination; if confirmed, she would be the first Black woman and first former federal public defender on the Supreme Court. Providing advice and consent on Supreme Court nominations is one of my most important responsibilities as a United States Senator, and I look forward to meeting with Judge Jackson and reviewing her record.