Besides it being his first year in high school, Landon also came out as queer recently.

“It’s almost every day,” Landon said of the bullying at Annandale. “You just get harassed in the hallway and get called the f-slur.” He added.

That’s why he and other students turned to the Gay-Straight Alliance. GSA is a club created at Annandale by students and teachers who wanted to create a safe and inclusive space for students who identify as LGBTQ+ to look to for support.

Amelia Clark, a junior at Annandale, is also a member of GSA. 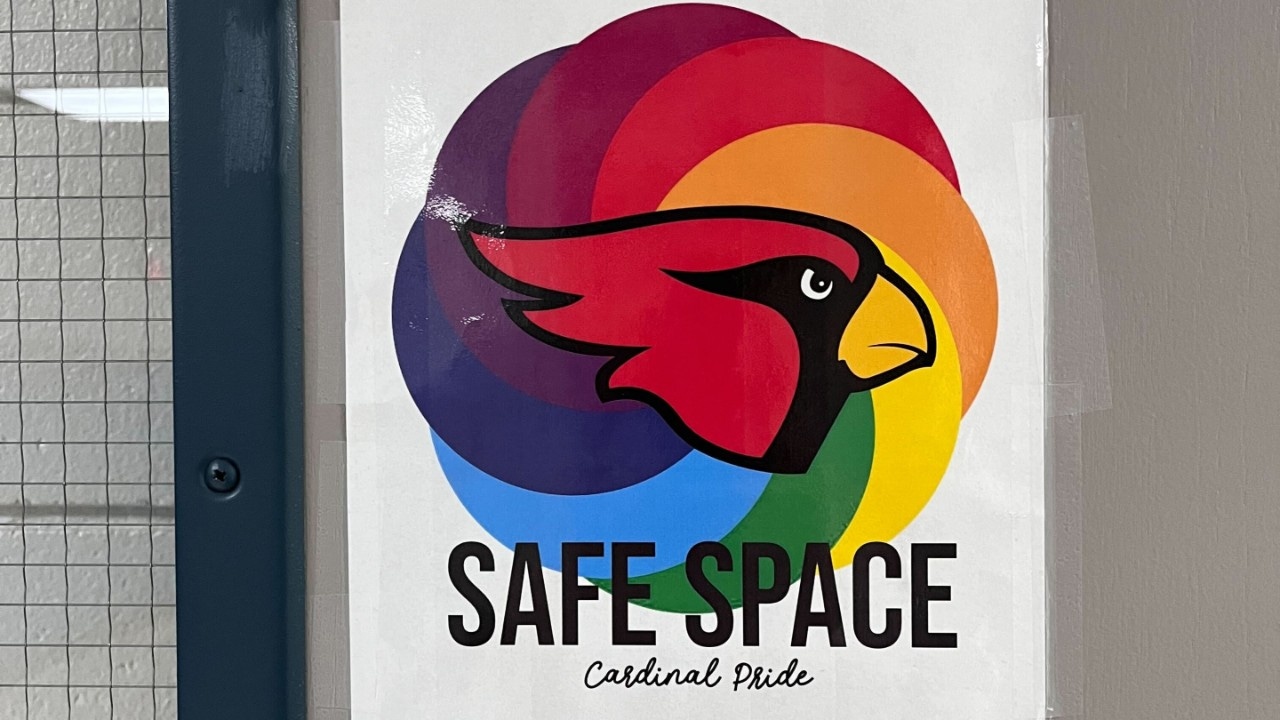 The group came up with the idea for “Safe Space” signs targeted at members of the LGBTQ+ community in their school, whether they were public about their identity or not.

GSA says the signs were optional for teachers to hang up in their classroom and many did.

“The goal was for students to feel included. Because it kind of sucks when you don’t know if you can go to a teacher or not,” Clark said.

While Nelson says he’s found students and teachers he does feel comfortable talking with about LGBTQ-related topics, there are some who he doesn’t trust.

According to him, the “Safe Space” signs help teachers communicate they are comfortable talking with students and on the other hand that students can feel confident in talking to those teachers who display the sign.

“It’s important to show LGBTQ+ students that they are welcome, they have teachers that are there,” Landon said. “But there are teachers in our school we know to avoid, who if we do try to talk to them will shut us down.”

When the colorful signs went up in November, students report it went well, aside from the homophobic remarks GSA members say they expected.

What the group did not expect was an email blast sent out to staff saying the new signs may have to come down.

“When we heard they were taking them down, people cried. There were a lot of emotions that happened,” Landon said.

Annandale Public Schools Superintendent Tim Prom confirmed a lengthy email did go out detailing the circumstances and how the district came to this decision alongside their legal team.

The email written by Prom starts off with a warning:

“This is going to be a fairly long email that I am asking you to read to the end as it might be one of the most sensitive messages I have had to send. I also want to be clear that decisions surrounding some of these more sensitive topics are not necessarily reflective of my own beliefs, they are based on the best information that I have gathered by those that deal with these situations regularly, specifically from a legal standpoint.”

It then goes on to say the district has been working closely with attorneys at Education Minnesota as well as educators at Flint Consulting to help better equip district leaders and staff in cultural responsiveness after numerous traumatic events across the country and at home like the murder of George Floyd.

“There are several components to the work that we need to do as a district. However, there are two areas that we felt needed to be addressed today. When it comes to what we post in our buildings and what we wear, case law has shown that we, as public school staff, must be very careful. There are two things to consider when posting material in our buildings and staff attire while working with our students. One, will what is posted or worn be seen as indoctrinating our students to believe or think in a certain way. Two, would we allow anything that represents the opposite viewpoint of what is being posted or worn to be posted or worn.”

To read the email in its entirety, click here.

According to the superintendent’s email, legal counsel advised the district that staff is not allowed to post or wear anything that is deemed political in nature or that would cause a disruption to the learning environment for students.

Annandale Public Schools’ attorneys say examples include anything affiliated with any governmental party — including names and/or slogans, Black Lives Matter, “blue lives matter,” rainbows or the specific word “pride” when used to describe a political perspective or beliefs, religious symbols or sayings.

The district also provided 5 EYEWITNESS NEWS with a statement that explains no one has been required to remove the Safe Space signs. The district adds it is trying to come up with a more inclusive sign for all students saying something along the lines of “All are Welcome” which would be in the school colors instead of a rainbow. It could also include a rainbow symbol as well as other symbols that reflect others’ beliefs, religions or identities.

After learning the signs may have to come down at some point, students say they feel as if their administration doesn’t support them.

“It’s like a punch in the gut,” Clark said. The junior says changing the colors of the sign changes the overall message that is specifically geared toward the LGBTQ+ community at Annandale High School.

“Schools should be a safe place for everybody. Not just for the normal people, or people who are straight,” she said.

“That just really stung, to show that our colors cannot be represented without it being a problem,” he said.

The students say they won’t back down or give in to the legal advice given to the school.

Instead, the GSA students and supporters have planned a school-wide walkout for noon Wednesday to make a point.

Students plan to lead a walkout in front of the Annandale High School, protest the decision to change the “Safe Space” signs, and then march to the district headquarters at the middle school. There, GSA leaders plan to make a public statement and read statements written anonymously by teachers who support them.