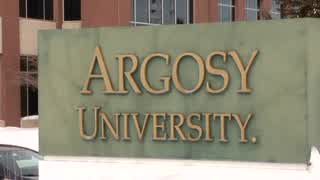 A file photo of an Argosy University sign. (KSTP-TV)

Minnesota Attorney General Keith Ellison announced Monday that his office has reached an agreement with the owners of Argosy University’s student debt in an effort to achieve private debt relief for former students who attended in the years prior to the university’s closure.

Argosy University announced it was shuttering in early March 2019, two months after its parent company—Dream Center Education Holdings—entered into federal receivership, which is a form of bankruptcy.

Additionally, 5 EYEWITNESS NEWS spoke with faculty at the time, who said they were not surprised when the university’s doors ultimately closed but said in the weeks following the closure that they hadn’t received their final paychecks.

RELATED: Faculty speaking out after Argosy University closes its doors in the Twin Cities

The Minnesota Attorney General’s Office reported Ellison was joined by the attorneys general of Arizona, Colorado, Florida, Georgia, Illinois, Tennessee, Utah, Virginia and the State of Hawaii Office of Consumer Protection during the negotiations.

The agreement will be filed in the Ohio federal court overseeing the receivership, according to the attorney general’s office.

Monday’s announcement coincides with Ellison’s additional efforts to seek relief for Minnesotans from federal student loans taken out to attend Argosy and other schools owned and closed by the Dream Center Education Holdings owners.

“People take out student loans to help them and their families afford their lives, and they trust that the schools they attend are well managed and telling them the truth,” Ellison said in a statement. “Argosy University’s owners mismanaged the schools and misled their students and the public about their financial state, nonprofit status, and options for students before closure. While those owners went insolvent, I’m glad my office was able to negotiate with the current holders of the schools’ institutional student debts and agree to cancel them. I hope this relief is a step forward for those students who were stuck with burdensome debt when Argosy closed and left them high and dry.”