After evacuation of Afghanistan, more than 1,000 people resettled in Minnesota

It’s been one year since the Taliban seized control of Afghanistan. More than 76,000 Afghan nationals have arrived in the United States since August 2021, according to the U.S. Department of Homeland Security.

Roughly 13,000 Afghan evacuees passed through Fort McCoy. It was one of eight sites housing Afghans across the country as part of Operation Allies Welcome (OAW).

Since August 2021, 1,314 people have arrived in Minnesota from Afghanistan, according to the Minnesota Department of Human Services. Of that total, 1,292 people came through OAW with a humanitarian parole status, while 22 people came with Refugee Status or Special Immigrant Visa Status.

The majority of those Afghans resettled in the Twin Cities metro area, while 87 people lived in Greater Minnesota. DHS told 5 EYEWITNESS NEWS that people may have moved since their arrival.

“We all used our personal resources, we put our own money to make sure people are moved to a place of safety,” said Mustafa Omar, the CEO of Minnetonka-based Shelter For Life. The nonprofit has provided humanitarian relief in Afghanistan for decades. 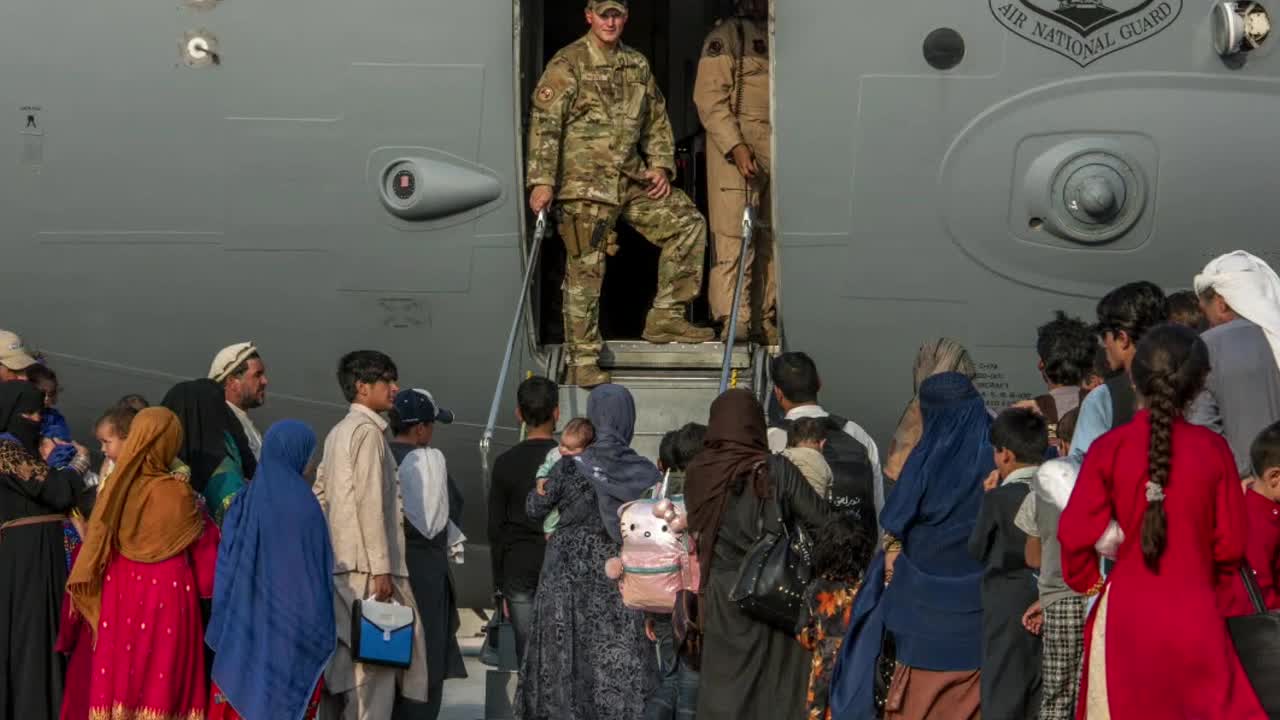 Afghan evacuees during the U.S. withdrawal from Afghanistan.

“Many of the families we helped, a group of us including veterans and other civilians, get out of Afghanistan a year ago — they moved to a place of uncertainty to a place of relative safety,” said Omar, who told us the families relocated to a nearby country. They are still trying to get to the United States or Europe.

“A year later, they’re still in that limbo,” said Omar.

He explained that some of the families are trying to enter the United States through the Special Immigrant Visa (SIV) program, which would provide a permanent status. It’s limited to those who worked with the U.S. Armed Forces or under Chief of Mission authority as a translator or interpreter.

According to a State Department spokesperson, more than 15,000 SIVs have been issued since the Biden administration started through July 31, 2022.

Senator Amy Klobuchar sponsored the Afghan Adjustment Act last week, which has bipartisan support. It would expand the SIV program to include additional groups, such as the Female Tactical Teams of Afghanistan and the Afghan National Army Special Operations Command.

The bill would also establish a task force to develop a strategy to support Afghans outside of the United States who are eligible for SIV status. It would require the State Department to respond to Congressional inquiries about those applications.

“The Afghan Adjustment will be a crucial aspect of the process,” said Omar. “It acknowledges that there are allies, there are people that have worked on behalf of and with the United States.”

In addition, the legislation would allow those in the U.S. with a humanitarian parole status to undergo additional vetting to apply for permanent legal residency.

“We must help Afghans who sought refuge in the United States find stability, opportunity, and community in their new home,” said Sen. Klobuchar. “I introduced bipartisan legislation with Republican Senator Lindsey Graham to provide Afghans who submit to additional vetting with the legal certainty they need to begin their new lives in the U.S. So many Afghans risked everything in support of our troops abroad, and providing the opportunity to apply for permanent legal status is the right and necessary thing to do.”

Humanitarian parole is a temporary two-year status for Afghans.

“It really causes a lot of anxiety for people who have already experienced a tremendous amount of disarray in their life and worry,” said Jane Graupman, the executive director of International Institute of Minnesota. “We get phone calls daily about what’s happening with their immigration status.”

The refugee resettlement process can take years, while the humanitarian parole is used in more emergent situations.

“They had to get people out of Afghanistan immediately because there was so much unrest and danger so the normal ways that Afghans have come, those avenues weren’t available at that time,” said Graupman. “For Afghans that are here now under the humanitarian parole program, many of them are applying for asylum, which is one of the only vehicles they have to get a permanent status. […] Applying for asylum is costly, it also takes a long time before you hear the status of your asylum claim.”

According to Sen. Klobuchar’s office, there are backlogs and processing time delays for SIVs and asylum applications.

“The fact that they acknowledged time was of the essence was really key in this bill,” said Graupman.

There are also delays for those seeking to come to the United States now through the Humanitarian Parole program. The U.S. Citizenship and Immigration Services website warns, “We are currently receiving an extremely high number of requests for parole. While we try to process all urgent requests for parole quickly and efficiently, petitioners should expect to wait significantly longer than 90 days for their parole request to be processed right now.”

Omar told 5 EYEWITNESS NEWS some of the families that are trying to get to the United States have applied for humanitarian parole.

“There’s been quite a lot of backlogs,” said Omar of the situation in general. He called on the government to take action, “We can’t use those as an excuse.”