Advocates are calling on local and state leaders to make changes to Olson Memorial Highway, which they say has had a negative impact on northside residents for decades.

Highway 55 runs from the west into the downtown area, cutting right through the northside.

“It was an intentional design that got us here, and I think it’s going to take an intentional design to bring the restorative justice that we need,” said Qannani Omar, an organizer for the Harrison Neighborhood Association. “At some point someone decided that Sixth Avenue corridor was not valuable. So it was brought to essentially carry white, more affluent commuters from the suburbs right through the northside into downtown.”

Advocates are hoping to gain community support to eventually remove Olson Memorial Highway, which used to be Sixth Avenue North. The street was a cultural corridor booming with Black businesses in the 1930s.

“It was a space where you could buy a pie, where you could go to see jazz music. It had walkability. People were able to live in this community and walk to their needs,” Omar said. 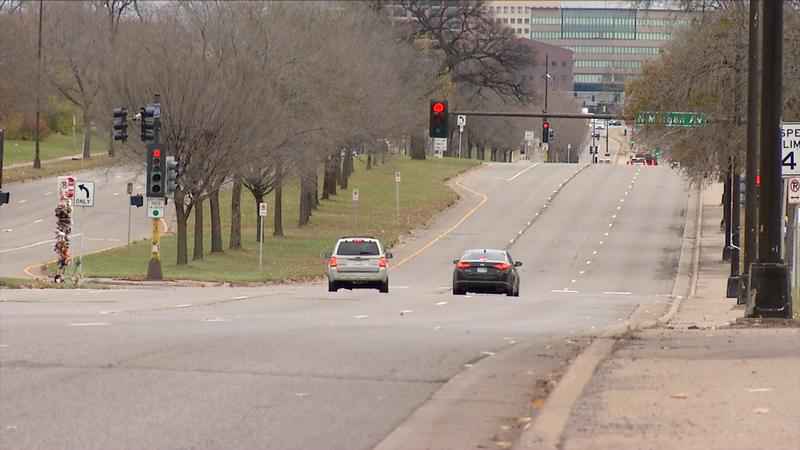 Cars drive along Olson Memorial Highway on Wednesday, Nov. 17, 2021, in north Minneapolis. Neighborhood organizers and advocates say the six-lane highway is a safety hazard to those living on the northside and detracts from the area's livability.[KSTP]

Then, Olson Memorial Highway was built in the 1930s, wiping out hundreds of homes and businesses, displacing people of color.

Our Streets Minneapolis is teaming up with the Harrison Neighborhood Association, calling on state and local officials to revamp the highway.

Advocates said the roadway creates division, pollution, and a danger zone for pedestrians.

Omar said asking local and state leaders to revamp the area has been an ongoing battle for decades.

The plan to fix the problem is broken up into two phases.

The first is making the highway safer for pedestrians and the community by adding crosswalks and lowering speed limits, to name a few.

“Communities here have the highest rate of asthma hospitalization in the Twin Cities and the largest source of this pollution is from traffic,” said Alex Burns, Our Streets Minneapolis coordinator.

The long-term plan is to get rid of Highway 55 altogether, replacing it with a Sixth Avenue North boulevard with green space, affordable housing, and businesses.

“I think in Minneapolis there’s been a conversation of how do we really close these racial equity inequities, and we can’t really begin to talk about that until we right this wrong,” “Omar said.

Organizers said they’re hoping to gain support from the Minnesota Department of Transportation to improve safety because it manages the highway.

Representatives will be canvassing the area this weekend to educate residents about the plan and garner community support.