Activists call for justice, healing on eve of Chauvin trial

It was an emotional but calm day in Minneapolis on the eve of the Derek Chauvin trial.

Black Lives Matter and other groups took to the downtown streets Sunday afternoon.

"I’m here to continue to stand for justice for George Floyd," declared Monique Cullars-Doty, a Twin Cities resident. "The world is watching, but it’s not enough, we want people across the world to take action."

Several hundred people marched from the Hennepin County Government Center, where the Chauvin trial is being held, to U.S. Bank Stadium and back. 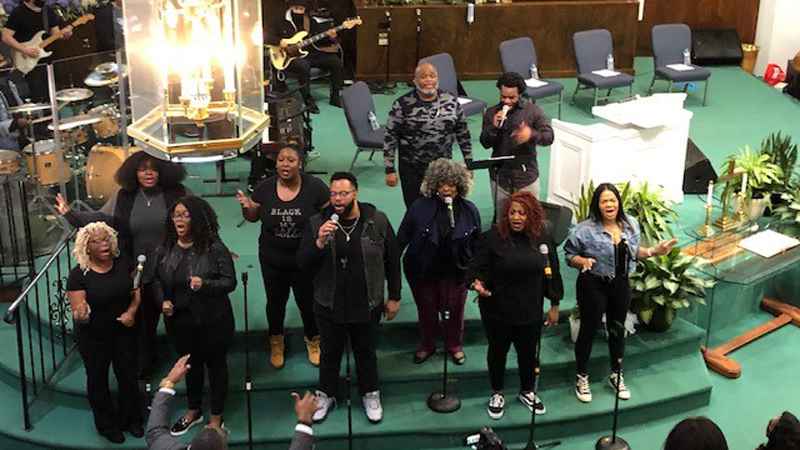 A choir sings during a prayer service and vigil for George Floyd the night before opening statements in the trial of Derek Chauvin on Sunday, March 28, 2021, at Greater Friendship Missionary Church in Minneapolis.[Richard Reeve/KSTP]

Some carried pictures of George Floyd, while others held signs calling for police accountability and reform.

"I’m just happy that the community is coming together so we can get justice," says Dante Aiken, from St. Paul. "Something has to change. There’s a lot of people who are afraid to say something."

Sunday evening, there was a prayer and rally at Greater Friendship Missionary Baptist Church to honor George Floyd.

"It was wrong to hear again another Black man repeat to a police officer that ‘I can’t breathe’ while his life was being taken prematurely away from him," the reverend said from the pulpit.

Among those at the well-attended service were the Rev. Al Sharpton, Floyd family attorney Benjamin Crump and members of the Floyd family.

On this night before the trial, Russell is urging calm and healing.

"On the verge of this trial, we just don’t know. There are emotions running all over the place as we get closer to tomorrow," he told 5 EYEWITNESS NEWS. "Really want to ask God to calm us and equip us with everything we need to withstand whatever happens."

Meanwhile, marchers today say they hope now is an opportunity to stand up against police brutality and wrongdoing.

"Because there’s no reason that a woman shouldn’t be able to call the police, or a man shouldn’t be calling the police because they’re afraid the situation might go south," Aiken says. "These are people that are here to protect us. We shouldn’t fear them."