An audio track with the sound of gunshots echoed across the North Community High School auditorium Friday night. 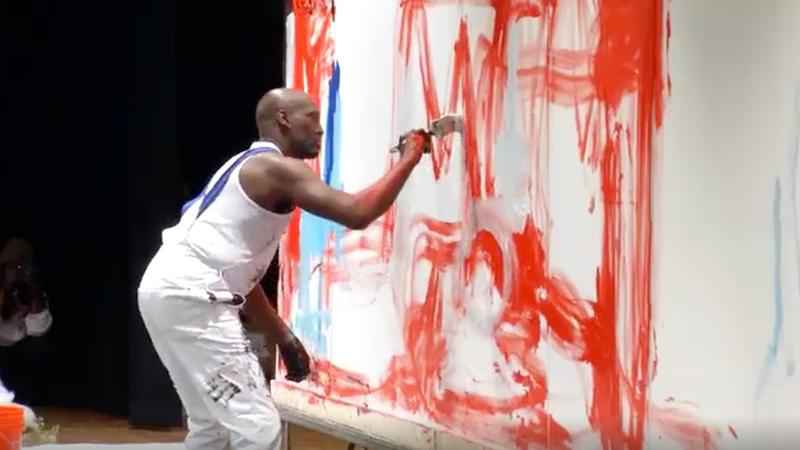 “The impetus behind this was the murder of the 12-year-old not far from here, happened in the fall,” he explains. “At that point, I told myself what can I do for the community, and as an artist, give ourselves a chance to escape all the madness that’s happening in North Minneapolis.”

The shooting death of 12-year old London Michael Bean in early September spurred Garrison to create this latest work, called "For the Love of Us."

An 18-year-old man and his father face murder charges in the case.

But Garrison worries about growing gun violence among young people.

"To continue this thing, the path we’re on is ridiculous. We’re almost at a record pace of murders right now,” he declares. “I don’t know if it’s being cooped up all last year, and now we’re having this hyper-vigilance, vigilantism or whatever it is.”

Public records show so far this year, 92 people have lost their lives to some sort of homicide.

Garrison, working earlier with his crew to set up a giant palate and a sound system, has been a youth employment counselor for three decades.

Over the years, he says, he’s known 10 young people who were murdered in the streets.

KSTP asked 16-year-old Isaiah Pacini, a crew member helping Garrison, if he thinks this kind of art might motivate youth to try to make their lives better.

“Of course, yeah, it’s already changed a lot,” he says. “I show my friends, and they like art. So it causes them to fix their ways a little bit. It speaks louder than words, really.”

Pacini says he has friends who’ve grown up with shooting violence.

He says he hopes Garrison’s art is a wake-up call to keep more families from grieving.

"So that just gave me another reason to do good and do what I need to do,” he says. “So my mom wouldn’t ever have to go through that, or anybody that I love."

Other crew members say political and community leaders need to better communicate with young people, letting them know that others care and are ready to help.

“There’s a lot of violence, there’s a lot of shooting,” notes William McLeod, who was streaming Garrison’s performance. “I think that’s the reason why events like this need to happen, to open a dialogue. What are the solutions? How do you fix something like this? I don’t think it’s a simple answer."

Watching Garrison’s work, you could hear the words "why do we want to kill ourselves?” again and again.

He says parents and adults need to step up and do more than just talk the talk — but get involved as well.

"How do we deliver this message to get young people to listen to change their behavior? Sometimes it’s a matter of being consistently loving, loving people through the moments,” Garrison says. “Sometimes it means it’s tough love and we need to be brave enough to walk through that with people.”