For Tetiana and Oleg Palamarchuk, this is a time of healing.

“When we come to USA, we were very touched by how people greeted us here,” she says. “Americans are always nice people, they ask, ‘How are you?’”

The couple—from Bucha, Ukraine—are guests in a North Minneapolis home, while Oleg is being fitted with a new prosthetic forearm and a bionic hand.

“I will feel more like a real person again with my arm,” he said. “I love working with the ground, planting trees, planting flowers for everyone’s enjoyment.”

But the Palamarchuks say that joy was eclipsed by fear and terror, when Russian forces attacked their town on March 4. 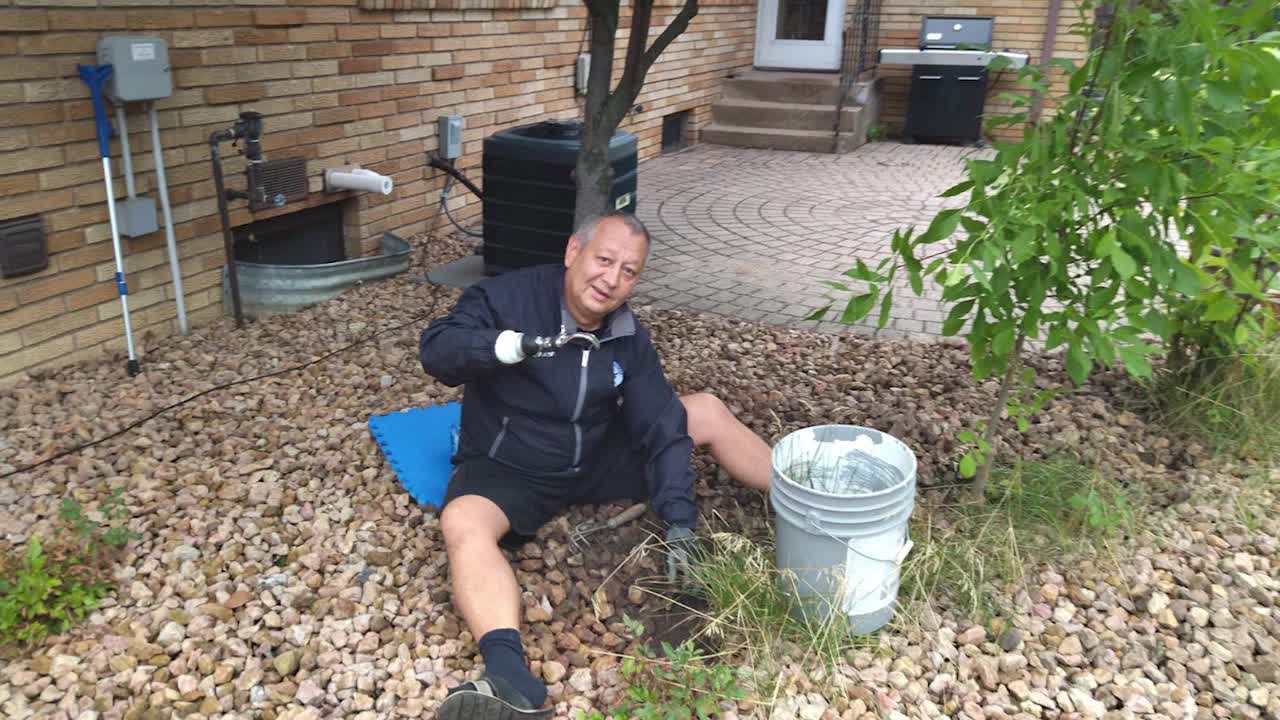 Oleg Palamarchuk will soon get a new bionic hand after being wounded in Ukraine (Courtesy: Palamarchuk family)

“I heard bullets flying above my head. It was terrible. We were frightened,” Tetiana recalls. “It was very loud, explosions near the house.”

She says her husband spotted an unexploded anti-tank shell and began moving it.

“He took it, thought it was okay, he brought it into the yard,” Tetiana remembers. “But it exploded in his hand. He did nothing, but it exploded, so it was damaged, he got no hand.”

The terrified couple—Oleg now bleeding badly—scrambled to get to the hospital.

But within moments, they say, their car was riddled with bullets.

After bailing out, they decided Oleg would try walking to a nearby hospital for treatment, and Tetiana and a friend who was with them, would run to safety.

“We did a few steps—not many, and we were shot,” she said. “We fell down on the ground. We’re lying in the ground and the Russians shot us when we were lying. I stayed in the street for nine hours, the temperature was minus five in the evening, it started to snow.”

Tetiana says her friend Victor died from his wounds.

She says, at one point, a Russian soldier who saw her, put bandages on her wounded legs, and then left.

“In those nine hours, it was like a whole life passed through,” Tetiana said, quietly. “I was thinking of my daughters who were staying home. I was praying, and I tried not to move until twilight. It really is a miracle that I’m still alive.”

She says a friend of a friend gave her a ride to a day clinic, where she got treatment for her wounds.

Through a local physician, the Palamarchuks connected with Minneapolis prosthetist Jacob Gradinar, who spoke with 5 EYEWITNESS NEWS about their plight in May.

“It’s heartbreaking to see how many people in the 21st century go through such a terrible time in their life,” he said. “When they live a peaceful day-to-day life, and suddenly, it gets interrupted.”

Gradinar, with the Minneapolis Limb Lab, said he felt compelled to help.

Just a week ago, he and his partners at the Protez Foundation, a Minneapolis nonprofit, flew the Palamarchuks to Minnesota, finding them documents for the trip, a place to stay in the metro, and the needed artificial limbs for Oleg.

All of that was free of charge, part of the foundation’s ‘Prosthetics for Ukrainians’ project.

“I am grateful to be in the U.S., and I am grateful for the Protez Foundation,” Oleg told 5 EYEWITNESS NEWS. “I feel very welcome here. Everybody has been very welcoming.”

As part of the fitting process, Oleg is wearing a temporary hook device.

Gradinar says the prosthetics provider Ossur is donating a bionic hand for his use. Oleg will be able to control the hand’s movement’s with muscles in his arm.

He says he plans to return to his job as a landscaping and road maintenance manager, but says there will be challenges.

“I want to work when I get back to Ukraine, but a lot of the equipment the Russians have destroyed—excavators, tractors, cranes, equipment I need for work,” Oleg noted.

Months after she was shot, Tetiana continues to use a crutch to get around.

The couple says after everything that’s happened, they are determined to get home. Their plan is to return to Ukraine in about three weeks.

“Our pets are waiting for us. We have two dogs and a cat, all our friends, all our relatives,” Tetiana said. “They are still in Ukraine. A lot of people are in Ukraine, they are doing something and we need to do as well.”

You can find out more about the Protez Foundation here.