A Minnesota company helps seniors connect with loved ones

Carol Pagel and John Ochsner love to dance — and they’re pretty good, too.

They also — with loving glances — finish each other’s sentences.

"We met just before the lockdown and all of that, and here this angel comes…” John says.

“I wouldn’t say that,” Carol laughs.

There’s a lot of love and laughter in this relationship, which began with a chance meeting at a party early last year and blossomed during the pandemic. 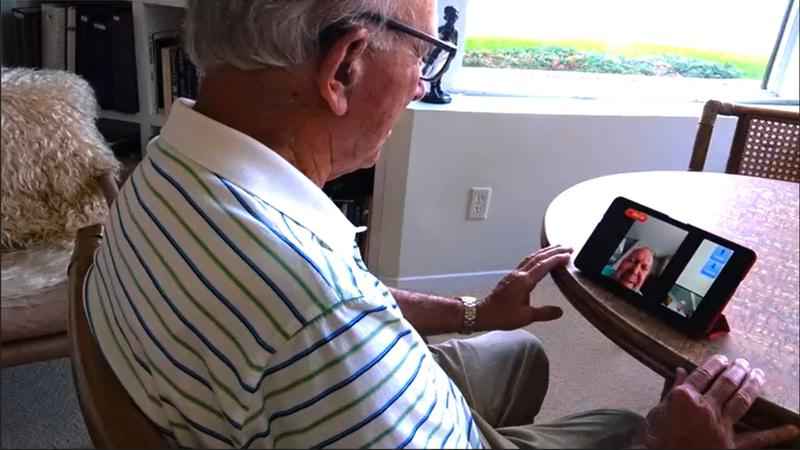 They have each other when many of their senior friends are facing loneliness and isolation.

"They just said it’s been awful because they feel they aren’t safe to go out, and they aren’t happy at home alone,” Carol says. “They’re just hungry to be with people and family and friends and in socializing again."

For this couple, it’s personal.

Carol has a daughter nearby, but John hasn’t seen his children together, in person, in eighteen months.

Using an iPhone or zoom hasn’t helped much either.

“I have macular degeneration and my eyes are gradually deteriorating,” John says quietly. "I had trouble with the zoom business, and that operation didn’t work. I don’t do well with big groups, and this isolates the family."

Tech inventor Scott Lien says he totally gets it.

"Mainly because of what I call the digital divide, we were unable to communicate with my parents and my mother and father-in-law,” he says.

Nearly eight years ago, long before the pandemic, Lien, who lived in California at the time, was trying to keep in touch with his parents, who were in their eighties, living in Iowa.

"My mom, who like half of this age group had significant hearing loss, she was not able to talk on a standard landline phone or cell phone. It was too hard for her to hear,” he recalls. “So we said, what if we design something from scratch for her age group, the group we lovingly call super seniors — those over seventy-five-plus.”

Lien and his son Issac went to work.

In eighteen months, they developed a prototype for a device they now call ‘Grandpad.’

“It’s an eight-inch, specially-designed tablet, and you can see it has a much easier to read, clear screen,” Lien explained — while displaying the tablet during a zoom interview. “It has front-facing speakers, so, therefore, it’s very loud, and the sound is actually tuned to the hearing types of seniors."

With a touch screen, users can scroll through emails, make a call, listen to music, view photos and videos, and even play games.

A $58-a-month subscription service includes the tablet, a sim card — so users don’t need Wi-Fi and a virtual support team that does periodic wellness checks.

"We’re making sure like if we see somebody is getting stuck, or their battery is going dead, we will proactively reach to people and make sure they’re doing okay,” Lien says.

Live video conferencing may be one of the most popular features.

We sat in on a call with John’s son Jay, who lives in Kansas City.

"I definitely think we communicate more,” Jay says. “You know, I’ve never really used FaceTime, so it’s kind of nice to have something we can easily connect with. I’m glad he’s able to use it easily, so it’s helpful, very helpful.”

Carol and John have been subscribing to Grandpad since May.

"If you are alone or are looking for things to do during COVID, it was wonderful,” Carol says.

They recently signed on as ‘grand advisors’ — a group of seniors who provide feedback to the company.

"For seniors that are older, and maybe don’t have any experience with computers, it’s amazing,” Carol notes. “Because you don’t have to go through all the things you need to do on a computer to reach your kids, or whatever you’re trying to do."

He adds the number of users has tripled since the start of the pandemic.

Half the company’s business, Lien says, is with hospitals and other healthcare facilities.

They use the device for telehealth conferences, virtual doctor visits, and family meetings.

Lien says the tablet is also a kind of secure window to the world.

"Grandpad creates that circle of trust and only invited guests can get in and communicate, so it’s much safer,” he says. “There is a lot of anxiety amongst this group of people, so we’re trying to give them the tools to help them live a better life."

For Carol and John, that better life will include a wedding.

They’re getting married on Sept. 25. Many children and grandchildren are expected to attend.

“It’s amazing, it’s just simply amazing,” Carol exclaims. "At our age, that we have found someone we want to spend the rest of our lives with. I think it’s just great."