‘A league of their own’: Age is just a number in this Minneapolis softball league

At Rod Carew Field in Minneapolis, the crack of the bat and the roar of spectators can be heard loud and clear. These boys of summer are playing extra innings, thank you.

"We’ve got guys in their 40s, guys in their 60s," second baseman Tony Wojcik said, smiling. "It’s just camaraderie coming out every week."

Carew is now a field of dreams for this over-40 wood bat softball league, hosted by the Minneapolis Park and Recreation Board.

"Whatever your age, whatever your ability, you can get out there and have a little exercise and have some fun," says Mike Madden, the manager of the Mudpuppies Amateur Softball Club.

"It’s fun to watch them," said Anne Sutton, of Minneapolis. "It’s guys that, they probably had a great time playing baseball in high school or little league and never gave it up and they’re still having a blast playing it." 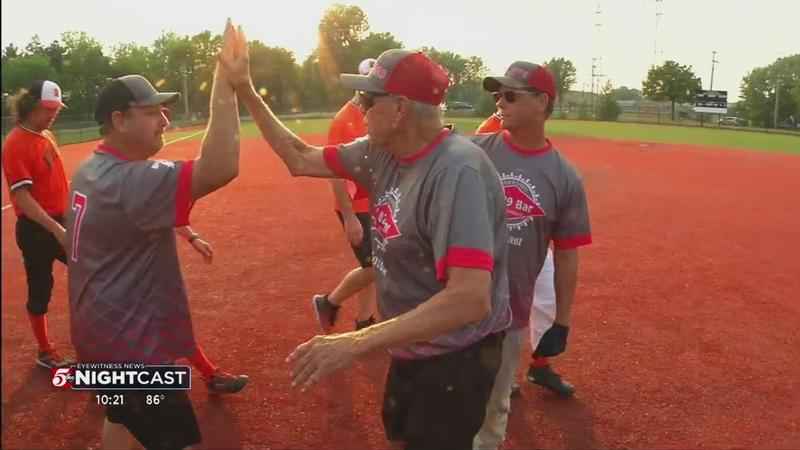 Over 40, but don’t dare say over the hill. Certainly not to Dick Anderson, on the mound for the 1029 Bar Nordeast team, named after the iconic Minneapolis bar.

"I’m 89. This year yet, I’ll be 90 in December," Anderson declared. "I just feel good when I’m out playing. At home, I can be tired and listless. When I get out here, I feel good. That’s the whole thing."

Of course, there’s plenty of good-natured ribbing from Anderson’s teammates.

"We don’t care your age, we’re going to pull you, you start walking people," one player laughed.

And, good-humored admiration from Anderson’s opponents.

If you still need convincing that Anderson is a senior phenom, consider this: he plays softball five times a week — in four different leagues.

"He’s had both knees replaced, and I think it was his left hip, and he plays five games a week," Sutton said. "He’s a maniac, he’s just crazy. It’s awesome how much he loves the game."

On this hot summer evening, Anderson’s youngest teammate is 45 years old, about half his age.

His only concession to safety: a face mask in case of line drives.

"I enjoy it," Anderson said. "I’ve played with kids of guys I used to play with. Some are probably their grandkids."

"It’s heart. He’s got heart," player Al Kibler added. "He’s got more heart than any other softball player I’ve ever played with, he loves the game."

And those wooden bats? A safety measure for everyone.

"The ball can come off those composite bats like a rocket," Madden explained. "I’m just guesstimating but I’m thinking velocity is probably 15-20 miles per hour less coming off the wooden bat."

A tough night for Anderson and his teammates, losing to the Mudpuppies, 16-3.

But under the league’s double elimination rules, they’re still in the playoffs.

The 1029 team will be back at Rod Carew Field next Thursday to play the Tony Jaros Rivergarden team.

The bar will be pretty high. They’ll have to win Thursday in order to avoid elimination, and they’ll need to win five games in a row to win the championship.

Watching the post-game handshakes and high-fives, two phrases come to mind. No. 1: Age is not a number; No. 2: It’s not whether you win or lose, it’s how you play the game.

"Just knowing that these guys are coming out and got my back," Wojcik said. "I got theirs and it’s just the way we do it. That’s the fun part."